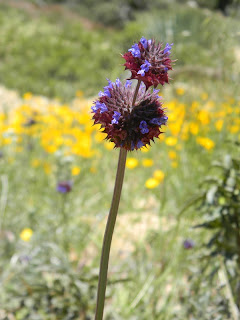 Quite a change from last week. The cooler weather and lack of an Easter holiday mean far fewer picnickers packing the parking area at West Fork. On the other hand, about a million motorcycle and bicycle riders were out in San Gabriel Canyon on Sunday. I had to follow a train of about 30 of them up most of the mountain. I also got to hear their rumble from way up at the top of the mountain. Oh, joy.

Arrived at the trailhead about 15 minutes earlier than last week. Unlike last week, when my car was the first there, there were already about ten vehicles in the lot when I arrived (not counting the 30 or so motorcyclist who were parked at the south end and chatting amongst themselves. 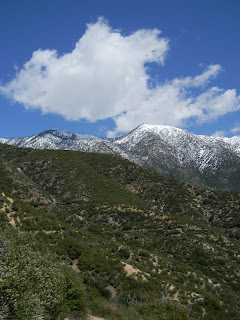 One of the vehicles was a full-sized van, with Korean lettering on the side. Wasn't sure how many people came in that, but I knew there'd be company out on the trail.

Grabbed my stuff, headed out on the trail, and walked about five minutes up before realizing I forgot to hang my Adventure Pass on my rear view mirror. Hiked back down and hung the permit, then started all over again. 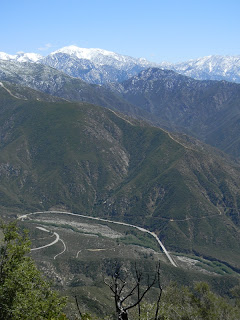 This first part is pretty steep, with full sun exposure. I got warm quickly, and welcomed the shade that I reached after turning into Lost Canyon.

Eventually passed the same patch of desert poppies I saw last week. Because of the cool night, the flowers were all closed up. They weren't nearly as impressive that way, although, by the time I got back, it was warm, the flowers were open, and they were again quite striking. 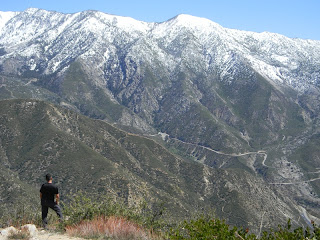 There was also a bit more water at the two points where water crosses the trail. Still nothing that a decent stride can't cross, but there was more. Also, I could hear a much louder sound of rushing water down below.

Reached the saddle about 50 minutes after my second start of the hike. As I noted last time, although the sign says it's three miles to the wilderness boundary, I think it's a bit less than that. 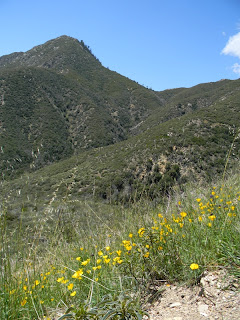 The going from here to the top of Smith Mountain is pretty steep, but definitely easier and shorter than my walk last week, heading south from the saddle. The way here is rockier and has more vegetation holding the soil up (north facing, I guess). The rocks holds the soil better and gives you solid foot holds or hand holds as you climb. The trail is also better-defined, with a bit of a weave pattern that makes the altitude gain easier than you might think. Also, the mountain is not actually as steep as it appears. 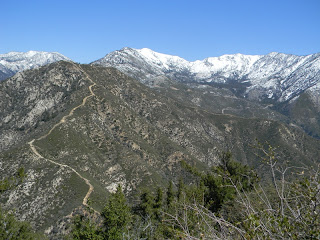 As I approached the top, I looked repeatedly to the north. The fire break route up to the ridge that I followed last week was easy to see. It was also clear as I reached the summit of Smith Mountain that, yes, I was correct last week: The ridge on the north of the saddle is definitely higher than Smith Mountain.

Nonetheless, the combination of being on a peak rather than a ridge and the snow cover over the high country meant the view was much more impressive from here than from there. 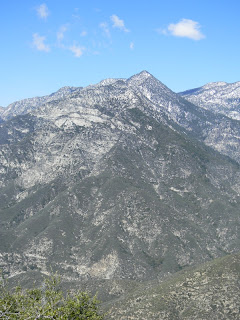 Twin Peaks, Bear Creek canyon, and Mt. Wilson are all off to the west. The Crystal Lake basin is off to the north, with Windy Gap being the obviously low point in the semi-circle of mountains that way. Hawkins is to the northeast, with a snowy ridge sweeping from north to northeast. As the ridge drops a bit to the northeast, Mt. Baldy peeks over at you. 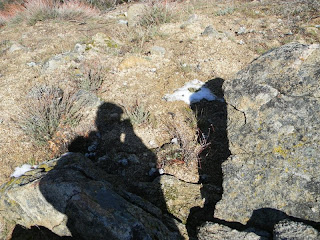 At my feet, the summit of Smith Mountain was broad enough to accommo-date the roughly ten people who were at the top when I got there. A few very small patches of snow were still visible here, but definitely no more than would make a dozen or so snow cones. ;D 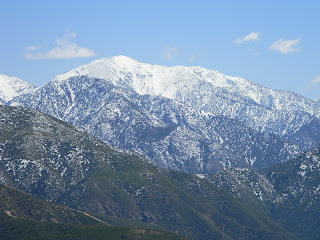 You can also see back down towards the parking lot where your hike started. It looks like a long way back. Still, I'm calling it 7 miles for the day.

Obviously more crowded than last week, but far from being crowded. There was only one point where I was annoyed by someone resting with his group, sitting down and eating lunch essentially on the trail. I had to move down a steep section of trail awkwardly to avoid the possibility of pushing dirt or rock down the trail and on to the slightly clueless hiker.
Posted by SkyHiker at 10:04 PM