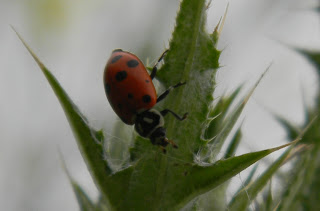 Hiked Monday, April 23. I didn't actually hike to the heart of Schabarum Park, but a more accurate description would take too many words.

After going eight days without an actual hike (had some stuff I had to do between Thursday and Sunday), I decided Monday was a MUST hike day. I was considering Chino Hills State Park, but I called during my lunch hour and found out the park was closed. I was surprised the slight drizzle of earlier in the day was enough to shut them down, but then had to pick an alternative. My choice was to try to see if the Schabarum trail went any further east than it appeared (I have previously taken it as far east as Fullerton Road and Pathfinder Road). 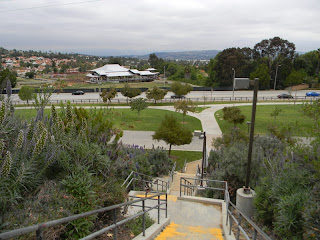 Near as I can tell, it does not. I turned east on Pathfinder and went several miles without finding any obvious spur of the trail away from Pathfinder and into the hills. Having no desire to walk along the road for multiple miles, I decided to park in Pathfinder Park and see if there were any trails heading directly out of the park.

I concluded that there was not. A road that does head into the hills is behind a locked gate, with a "No Trespassing" sign out front.

There is a 6/10ths of a mile trail around this park, which is what I walked in search of a longer trail. When none was found, I headed down from the top tier of the park to the lower area, then back west on Pathfinder. 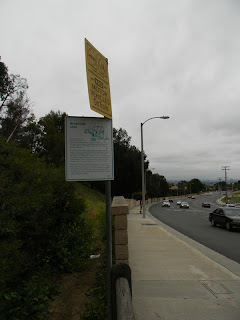 Right at the corner of Pathfinder and Fullerton Road/Harbor Blvd, there is what may or may not be a parking area for horse trailers. There was no "No Parking" sign there, but neither was there an obvious sign encouraging parking or announcing this as a formal trailhead. That's why I ended up parking back at Pathfinder Park.

To get to the trailhead, take the Pomona Freeway (CA-60) to Fullerton Road. Go south on Fullerton just about two miles, to Pathfinder Road. I made a left turn at Pathfinder, and turned eventually went into the park entrance, about 1/3 of a mile from the corner. However, if you are interested in hiking, there are also several alternate parking locations off of Fullerton Road, with several alternate trail access points. 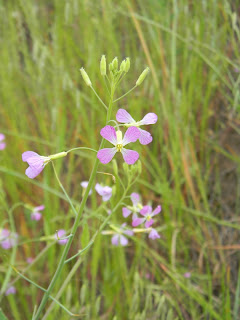 As noted in a previous post, Fullerton Road makes a quiet fork to the northwest, just south of Pathfinder. If you're not really paying attention, you'll like "stay" on the road you were on, and suddenly discover you're on Harbor Blvd, instead. The parking areas I mention above would be reached by turning on to this little Fullerton Road and looking to your right for the green Puente Hills Landfill Native Habitat Authority signs.

Most of the walking I did on Monday would be on the trail map linked here. At the far right end of the map, where the trail intersects with Fullerton, is near where I started. Pathfinder Road is not on that map. The name change from Fullerton to Harbor is also not on the map.

From Pathfinder Park, I headed down to the lower tier of the park, then west on Pathfinder, to my "real" trailhead for the day. 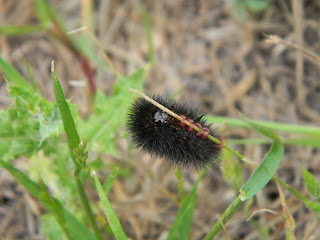 The trail is labeled on the map as "Schabarum Trail Extension." It begins literally behind a brick wall, with a sign that warns of mountain lions. I suspect that's just a "CYA" issue, though of course there's always the possibility of mountain lions in a quasi-wilderness area. The Puente Hills are supposed to be a wildlife corridor from the Santa Ana Mountains to the San Gabriel River, so a cougar could find this place, though he/she would have to jump plenty of fences and probably cross at least a few busy roads to get here.

After a brisk climb that puts you above the backyards of folks in Rowland Heights, you keep climbing and trending to the west. Your views are largely confined to the north, however, as you never really reach a ridge to see to the south. 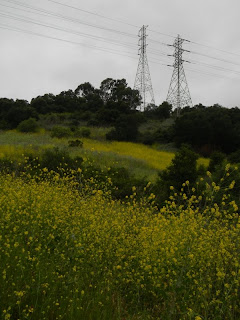 After 2.7 miles, you intersect the Powder Canyon trail. This is after about a mile's worth of switchbacking descent. If I didn't know I had an alternate way back, I'd have been very reluctant to give away all that altitude (400-500 feet, I would estimate).

A right turn at the junction would keep you on the Schabarum Trail Extension, and lead you into Schabarum Park. Or, if I were feeling more ambitious and it were earlier, I could head right, then catch the Schabarum Trail westbound and make a very large loop of the day. However, this was an after work hike and I was not dressed to make a serious exertion very comfortable. So, instead, I made a left turn at the bottom of the hill, along a broad dirt road that was, nonetheless, not signed or labeled at the junction. 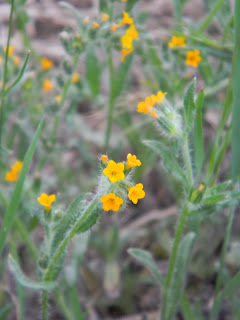 Because of my previous hikes in the area, I knew this would lead me towards Powder Canyon, where I could get back to Fullerton Road, then back to my car.

After 4/10ths of a mile up a fair incline, I reached the junction with the Purple Sage Trail. That's the way I had gone on a previous hike, though I have to admit it did look very different and somewhat unfamiliar when viewed from the opposite direction. 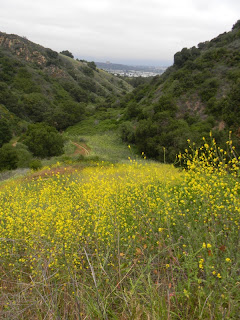 Two-tenths of a mile later, the Black Walnut Trail split off to my left. This would have been a very slightly longer distance, but I also knew it would entail another substantial altitude gain. Again, not being dressed for serious hiking, I declined the challenge. Instead, I stay on the Powder Canyon trail, which was broad and with no further altitude gains between me and Fullerton Road.

From here, things did look very familiar as I sped down towards my car. The map says it's 1/2 mile to the horse exercise area and parking lot, then 12/100ths of a mile from there to the Nogales trail, then a similar distance to narrow Fullerton Road. 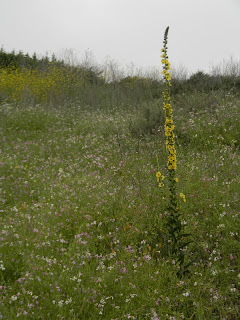 That means about 4.1 miles for my loop from the corner of Pathfinder and Fullerton and back again, 1/2 mile looping around Pathfinder Park, and about 1/2 mile each way between the park and my trailhead, for slightly over 5 miles for the day.

Plenty of mustard and radish are still blooming, though there are probably more seed pods than flowers on the radish. Thistle are still growing. Ladybugs were common on the thistle. I saw one "woolly bugger" on a piece of grass early on my hike. I also saw some lupine, a scattering of morning glory, a moth mullein, and a few other species I didn't know.
Posted by SkyHiker at 8:50 PM