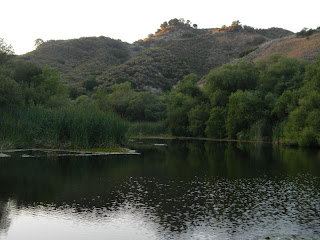 Hiked Tuesday, June 19. With business again taking me to Van Nuys, I elected to return to Malibu Creek State Park. I also decided to use one of my day passes from the California State Parks Foundation to enter the park-proper, with the intent of getting park map. I'm not sure if they have a free version of the map, but I wound up buying a trail map for two dollars.

I then pulled into the first lot on the left. 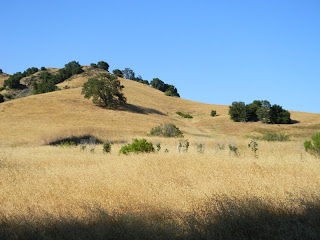 To get to the park, I took U.S. 101 (Ventura Freeway) west, about 19 miles past I-405 (the San Diego Freeway), to Las Virgenes Road. As last time, I exited there and headed south about three miles. However, this time, rather than turning at Mulholland Highway, I continued straight for a short distance, and turned right, into the park. 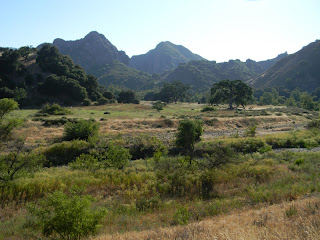 Once there, with my map, I studied the trails. I saw several good candidates that were actually outside the park. But I didn't want to hike from there after having used a park pass, so I decided to just hike Crags Road. 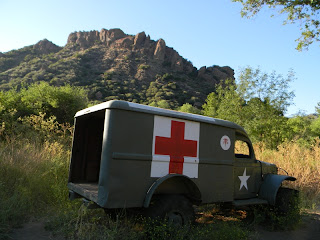 From the lot I was in, a trail from the southwest side of the lot heads south, past the second lot which, had I known better, I should have parked in. That lot is just before a sign that says, "Overnight Campers, Only." This added between 2/10ths and 1/4 of a mile to my roundtrip distance. 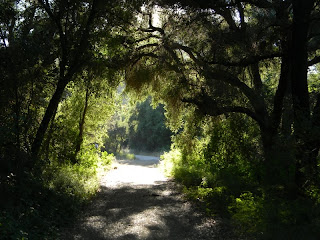 From there, it's 2/10ths of a mile to where the Grasslands Trail intersects with Crags Road, and another 1/10th of a mile to where the High and Low Roads split. I've never actually taken the low road, though perhaps next time, I will. Instead, I've taken the High Road, which stays above the north bank of Malibu Creek as it arcs around the visitor's center. Meadows, trees, and crags are laid out before you, across the river. Very scenic. 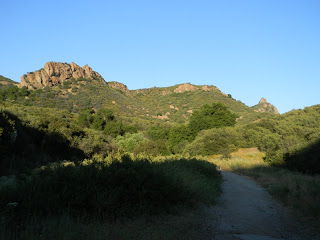 Meanwhile, to your right are more rolling hills and big 'ole trees scatter among them. After another 1/2 mile, the High Road rejoins Crags. Then the road climbs the steepest section of road between here and there. Near the top, a small trail leads off to the left, as a "backdoor" to Century Lake. You can also reach Century Lake by proceeding another 1/10th of a mile, and following the sign on a hairpin turn back towards where you came. 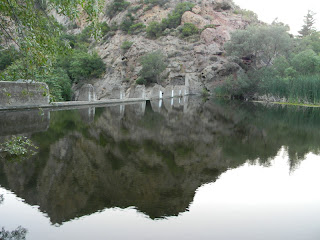 It's a very scenic pond, which I visited on my return leg. Instead, I continued forward, wanting to get to see Malibou Lake. Unfortunately, I made the mistake of thinking that Crags Road would take me to a nice viewpoint. In reality, the road to the dam ends in a fenced deadend, and the other section that leaves the park turns to pavement and residences 1/2 mile before you reach the lake. 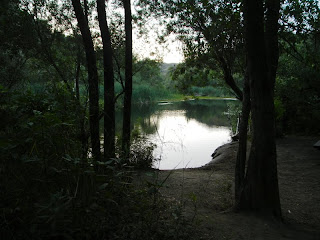 In retrospect, I should either have driven to the road or taken the Cage Creek trail north to the Lookout Trail, then turned left and headed towards the Reagan Ranch. That's a likely future hike. 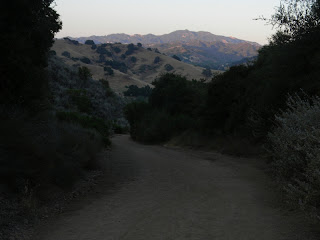 Shortly after turning around, I ran into a couple walking the other way, asking about "the lake." I assumed they meant Malibou Lake, and told them what I ran into, and where I figured they would have to go to reach the lake.

However, about an hour later, as I approached Century Lake, it occurred to me that maybe they were really looking for Century, and had simply missed it and walked WAY past where they should have gone. 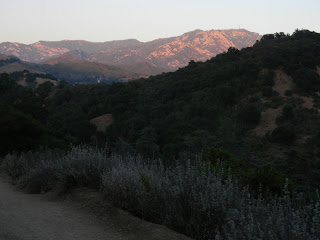 Along my return trip, I passed Bulldog Motorway and Lost Cabin Trail, but took neither. I also passed the M*A*S*H site again. But having just been there three days previously, I did not pause.

I also passed the Cage Creek and Cistern Trails, as well as the Low Road. Many more alternatives, for future consideration.

As noted earlier, I did stop briefly at Century Lake. By then, the sun was down. But it looked very peaceful. No doubt it would look less peaceful if it was filled with folks trying to escape the heat with a swim. I guess, in that respect, coming late was a good idea. 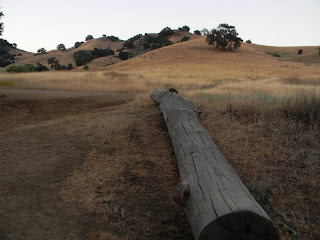 For the day, I walked 7.5 miles, with only a couple of short inclines along the way. These are generally child-friendly hikes, if the kids are so inclined. But it does get hot, so you don't want to go without enough to drink, and you don't want to necessarily go the whole distance with younger kids, particularly given that there aren't any restrooms once you pass the visitor's center. Maybe just to Century Lake.

Didn't get back to my car until about 8pm. It was nice having another twilight hike. It's been a while since I've done one of those.
Posted by SkyHiker at 10:00 PM