Hiked Saturday, March 29. Although I had no reason to expect much of a show at the Antelope Valley California Poppy Reserve, I figured I'd take a peek and see how things were going there.

Turns out it's been four years since my last visit there. (I am often surprised when I see how long since I've been to certain places). So, on Saturday morning, I headed up I-5, then took CA-14 to Lancaster. The Antelope Valley California Poppy Reserve is located about equi-distant from CA-15 and I-5, but coming up CA-14 means you're coming through Palmdale and Lancaster, for what ever that's worth. 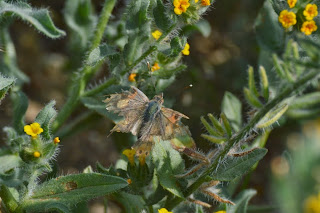 From CA-14, you exit at Avenue I (a large sign on the freeway indicates this is your exit). At the bottom of the ramp, turn left.

Once you turn, there's a large multiplex on your left, and a Jack in the Box on your right. Other than that, there are essentially no services between here and who knows how far. So, if you're running low on gas, turn right at the bottom of the ramp, instead. An ARCO and a Chevron station are a block to your east. 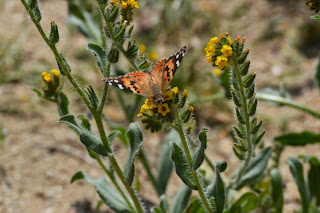 If you are heading west on Avenue I (towards the Poppy Reserve), it's about 15 miles. Your road makes a couple of sweeping right and left turns along the way, so pay attention and don't speed. 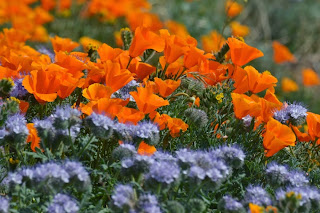 Along the way, I saw several fields covered in goldfields. Only scattered poppies (although I also saw some poppies on the north-facing slopes of the hills as I descended into the Antelope Valley). 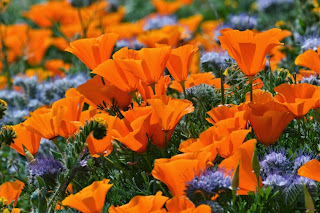 At the actual Reserve, poppies were common, but far from a carpet. In other words, it's not a great year, nor even necessarily a good year for poppies. But it is, apparently, better than it was the last two years. 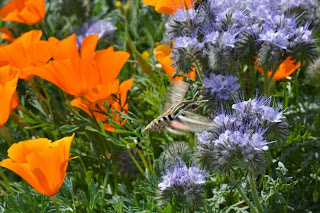 You'll find numerous patches of poppies, and some long "avenues" (where the poppies are growing along a drainage crease). And, within those patches, numerous bees, flies, moths, butterflies, and hummingbirds are making the most of things.

At least one of those butterflies had a close call. The second photo in this post shows a painted lady butterfly that lost at least two-thirds of its wing surface to predation. The third photo shows another member of the same species, with wings intact. 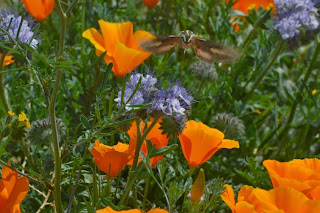 There were also some tremen-dous, humming-bird-sized butterflies, with mouths that look to be two inches long, sipping from flowers. they were drinking from the phacelia. The painted ladies, by contrast, preferred the fiddlenecks. 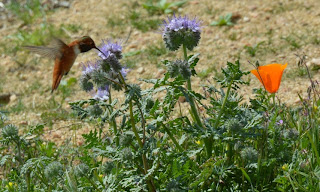 The day was somewhat windy, and got windier as the day went on. I'm told the poppies close up when it gets too windy, so I was fortunate to be there somewhat early. It was perfect hiking weather. 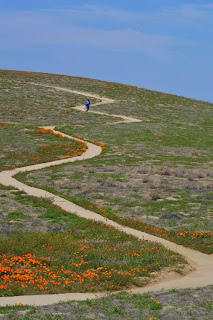 After I finished my two hours or so wandering a part of the Poppy Reserve, I then headed for the Ripley Desert Woodlands State Park. These woodlands are just about seven miles west of the Poppy Reserve, also on Avenue I. Figured I'd take a peek there, too. But, as of this past Saturday, absolutely nothing was blooming there.

As my previous post notes, I then turned back to the west, and drove to Saddleback Butte State Park. My post on that hike is here.
Posted by SkyHiker at 7:20 PM