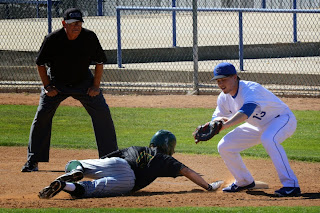 Extremely short hike out of San Bernardino on Saturday, February 14. I was at Perris Hill Park (1135 E.Highland Avenue, San Bernardino, CA 92408) to watch a baseball game; Cal State San Bernardino was hosting Point Loma Nazarene University. My nephew plays for PLNU, so I drove out here with my parents to meet my sister and brother-in-law and watch some baseball. 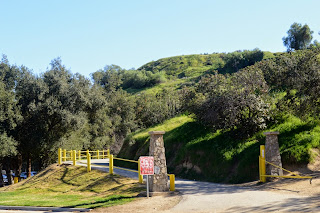 Well, we also made a pre-game detour to the casino of San Manuel nation (3.5 miles away, according to Google maps), as well--that detour cost me a mere ten dollars. :D

Apparently, college teams tend to play double headers (often, double headers on back-to-back days!). So after the first game, and after having stared at the hill that overlooks the stadium for several hours, I went on a little hike. 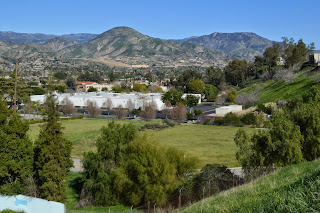 I didn't know for sure how long the hike would be, or what I'd see, but there was a hill, and there was a trail, and I saw people walking up there. So, off I went.

Perris Hill Park, then, is right adjacent to Highland and near San Bernardino. Not sure about city limits. Just west of the ball field, at the south end of the lot, was a paved road that appeared to climb the hill. I walked up that hill, as a mountain biker also peddled up. 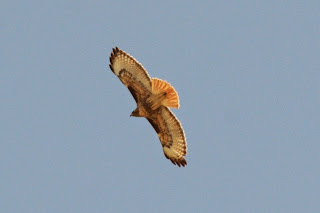 As I gained altitude, I saw what appears to be the San Bernardino Sheriff Depart-ment's shooting range, just a bit northeast of the park. It's in a bit of a depression, with very thick wood and earthen bunkers to contain the projectiles.

There was also a parking lot and a structure overlooking the shooting area, though I did not go to investigate. 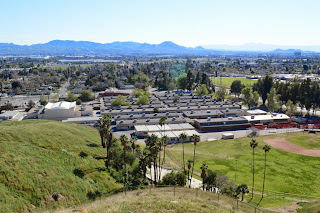 Instead, my road curved back to the west. Once at the top, I saw a high school and a high school track. The letter "P" was on the south-facing hill. Google maps says this is Pacific High School.

Across the street from the high school was something that looked exactly like a jail: Squat, institutional, windowless buildings, high walls, tall chain-link fences, topped with razor wire. But no jail is listed there on google maps, so maybe it's been closed. 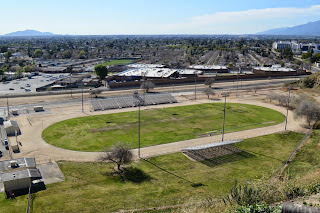 Further to the was a building with a large cross on it, which turned out to be St. Bernadine Medical Center (hospital). 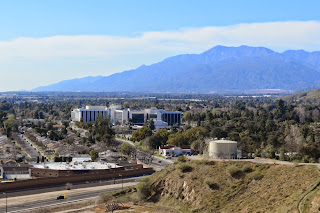 The park's very small, and it's surrounded by city. But it's not far from the San Bernardino Mountains, and several red-tailed hawks visited the ball field during the game.

The hill is also not very tall, but it rises well above the surrounding plain. Surprisingly nice view from the top. 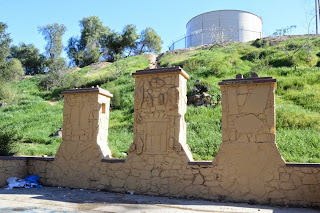 There's also a short, rocky structure that was covered in graffiti.

I headed down the road that popped back in to the park a bit west of where I started. Several small wall structures on this side. Then I walked back to the ball park. Maybe 1/2 mile, in total. Not really a hike by itself, which is why it's got a letter here. I combined this short hike with a slightly longer but still short hike the next day as my hike 11 for the year. Falling somewhat behind my hoped-for pace, but I still am optimistic I'll be able to pick up the pace once we shift to daylight savings.

Definitely not someplace to make a special trip to see. But if you're already here and want to stretch your legs, it's something to do.
Posted by SkyHiker at 9:58 AM