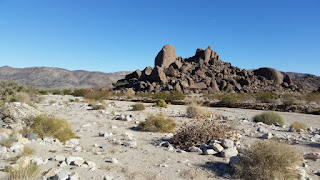 Before Joshua Tree became a national monument (and, later, expanded and turned in to a national Park) much of the land was subject to mining and/or grazing. The remnants of that past are on display in many parts of the park. One such place is here, at Contact Mine. 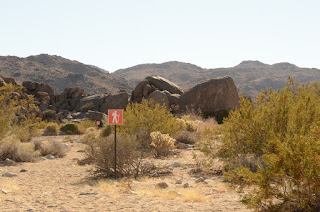 Over the past five yeas, I've done most of the developed hikes in Joshua Tree National Park. Yet, this year, I had not made a single trip to the park. So I had an inkling that I might want to head out here on my next available opportunity. 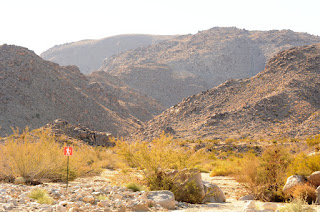 Hence, in the days before my off day, I had spent much time going over my National Geographic / Trails Unlimited map of Joshua Tree National Park. In doing so, I noticed the short trail to Contact Mine. I had never been here, yet it seemed like it would be easy to find. The trail seemed to start just inside the North Entrance, and the map showed it as 3.6 miles roundtrip. I figured I could do this hike, then still have time for a short additional trail, despite my late start. 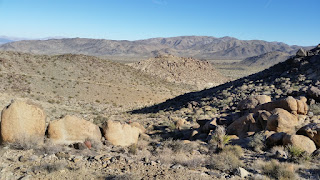 The North Entrance is within Twenty Nine Palms, south of Highway 62. There's a visitor center near this entrance, just as there is one north of the West Entrance, out of the town of Joshua Tree. If coming from Los Angeles, Twenty Nine Palms is another half-hour or so further east. 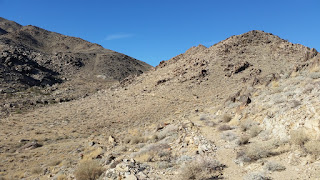 Upon reaching the fee station at the North Entrance, I asked the ranger there about the hike to Contact Mine. He seemed to suggest explaining directions (for the hike, I guess) would be too complicated, and that the trailhead also would have no mention or signage indicating the Contact Mine. I mentioned that I did have the National Geographic /Trails Unlimited map, and he said that if I could navigate by map, I could probably find my way.

This turned out to be true. At the exhibit at the parking area (about 1/2 mile inside the North Entrance of the Park), only mention of the California Riding and Hiking Trail was made. That one starts on the east side of the road, then loops along the northern portion of the park, ending near the Black Rock area, far to the northwest. I had hiked around that section during my first 100 hike year, when I went to Eureka and Warren Peaks. 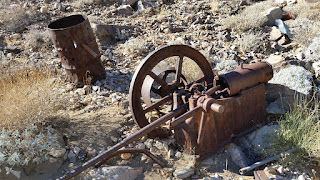 Meanwhile, today's hike started on the west side of the road. A well-defined trail headed west from there, but had no trail head sign indicating where this might lead. There was a large orange sign of a hiker this way, however, indicating that this was a hiking trail. 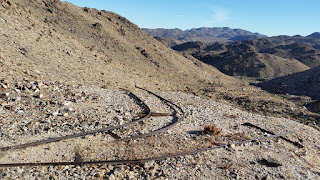 After a short distance traveling across generic desert growth, the trail entered a wide, sandy wash. Here, any trace of a trail would be obliterated with each rain. However, the orange hiker signs were generally spaced close enough that, if you had any question, you could walk a bit past one sign, and soon see the next. This continued for about 3/4 of a mile, with only a very slight gain in elevation. 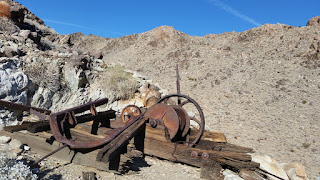 Finally, the trail approached the hills, and a higher, berm-like barrier seemed to partially block the canyon opening. The trail went to the point of that berm, where obvious stone steps led up to the top. Rather than bounding over the uneven surface of the wash bottom here, the path stayed up for a bit, before dropping and crossing the wash a bit further uphill, then continuing on the other side. 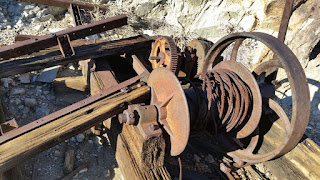 There were no orange signs here, but I found the path rather easy to follow. The only confusing part was as I climbed up on the right side of the wash, and saw a very clear trail heading up the other side. I believe the trail on the left side (when facing the hills) is an old trail, and the one on the right is less steep and better graded, and so the "correct" trail.

After 1/4 mile or so, I saw some poles and barrier material on the hill, far above and to my right. Obviously some mining ruins there, but that was not the main goal, so I continued along the well-defined trail. 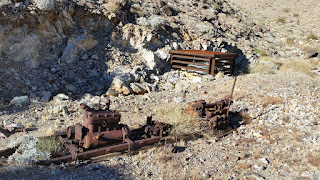 Even before dropping down to the bottom of the wash, again, I could see various ruins and barriers ahead and above. I carefully navigated my way around them, trying to avoid unnecessary erosion or damage as I made my way around these ruins. I spent about 15 minutes poking around here before returning the way I came.

As noted previously, this was about 3.6 miles roundtrip. Modest altitude gain. I would guestimate no more than 200 feet. Never far from the road, but this area did not appear to get a lot of foot traffic. Nice little hike.
Posted by SkyHiker at 12:00 AM