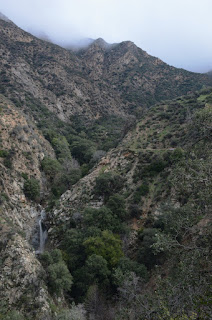 Hiked Saturday, February 18. Given the heavy rains of the previous days, I intended to try to return to the base of Millard Canyon Falls. I had hiked there just over a month previously. However, the water was running too high for me to feel confident of being able to make the return on the first crossing. And, that being just the first crossing, I was not sure if I would be able to make all the other crossings I had to make last time, either. So I scrubbed the original plan, and decided to hike the Sunset Ridge Trail, instead. 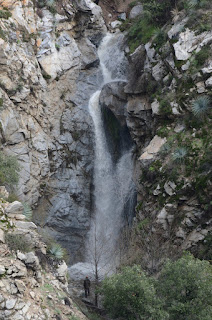 From the Millard Canyon campground (where I started this hike), it's a steep 8/10ths of a mile from a paved but non-public road. Then it's about 1/5 of a mile on that, until a dirt trail begins, again, on the left side of the pavement. About 1/3 of a mile on the dirt trail, there's a pretty direct view to Millard Canyon Falls. I shot both a wide and a zoomed shot of the waterfall. I like the zoomed shot because there's a guy who was either braver or wetter than me, standing by the base of the falls. 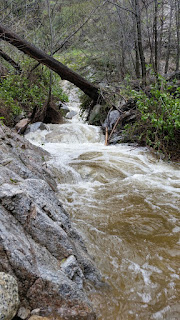 I continued on the Sunset Ridge Trail to the cabin, then dropped down to the water level. I could go no more than 50 yards upstream or downstream from there without risking a soaking, so I turned around at this point. Here's a look upstream from my turnaround. I'm calling it three miles, roundtrip, but I'm not entirely sure of the distance covered.
Posted by SkyHiker at 9:29 PM