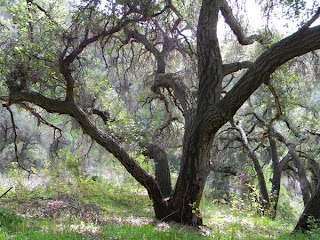 Hiked Thursday, February 24. Marshall Canyon is north of Pomona or San Dimas or La Verne. From the 210 Freeway, exit at Fruit Avenue, head north for a few hundred yards, then turn left at Baseline Road. From there, it's about 1000 yards to Esperanza Drive, where you will make a right. Take Esperanza Drive about two miles north. It will turn to the left and change into Golden Hills Road. Once you're heading west, be on the look out for Stephens Ranch Road. Make a right there.

Lower Brandt Park will be on your left, with basketball courts and a restroom. I think these are the last public toilets out this way, because Marshall Canyon Park is pretty much undeveloped. 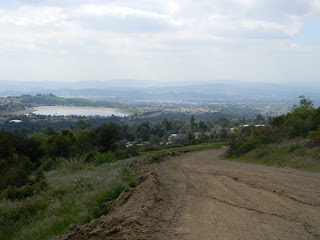 If you continue past Lower Brandt Park, you'll soon have Marshall Canyon golf course on either side of you. There are a number of golf cart crossings here, so keep an eye out for them.

After you're past the golf course, Stephens Ranch Road curves to the right. Stay on the mainroad, and do not turn through any gates. At the top of the hill (before you start driving down the other side), there'll be a large dirt parking lot on your right. It's signed as the equestrian assembly area.

Park there. On the east side of the lot, you'll see several signs for Marshall Canyon trail. It goes both upstream and downstream from here.

I headed to the left, where the trail soon crosses the paved Stephens Ranch Road and parallels the road for a bit on the north side of the pavement. Eventually, the trail (a very broad dirt road) bears to the left and heads for the hills. 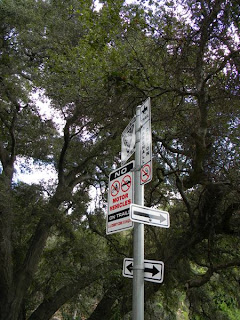 Since I had no particular destination, I wandered a number of the trails and dirt roads in the area. I discovered that this trail was like a lot of LA County Parks trails--the sign for a singled named trail (in this case, Marshall Canyon Trail) often had signs with arrows pointing in three different directions. In other words, the single named trail referred to a trail system, with no differentiation between the various spur trails that lead to the main trail, which forms a large loop (about 5.5 miles, as I understand it) through the area.

Not all intersections are signed. At some intersections that are signed, arrows will direct you in 3 or even four different directions. So either give yourself plenty of time to explore the alternatives or just accept that you'll be backtracking some and may miss your correct turn a time or two before you get back to your car. 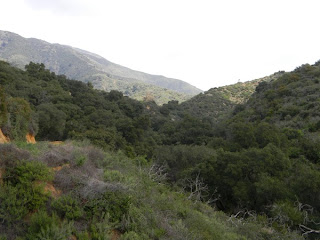 Because I both got a late start and had plans for later in the afternoon, I only planned to walk about three miles. In practice, because of "wrong" turns (through, really, how can it be a wrong turn if you have no destination?), I ended up walking about four miles.

At any high point on the trail, you'll have a good view south, overlooking San Dimas, La Verne, Claremont, etc. The San Gabriel Mountains will be to your north. In lower areas, near the canyon bottoms, you'll be in a thick oak forest. In more exposed areas, you'll be in chaparral-sagebrush country. 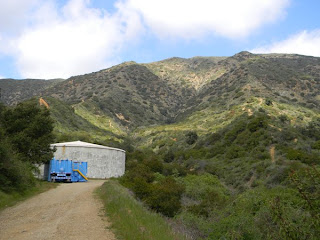 There are a lot of water tanks up this way, and a number of pipes running through the area. There are also a lot of birds and rodents, so bird watchers might find this place a particularly good hike.

A more systematic writeup of this area is available on Dan's Hiking Blog.
Posted by SkyHiker at 8:53 PM