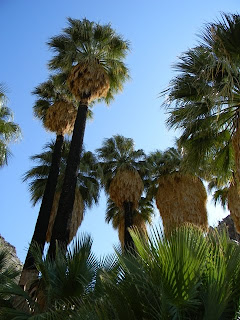 Hiked Tuesday, April 19. This was my second hike for the day, started about an hour after I finished the previous one. I drank something cold, drove back to the visitor center, cooled off some more, then headed east on CA-62. IMHO, I think the effort/reward ratio for this hike is exceeds that for the Willow Hole hike by a big margin. 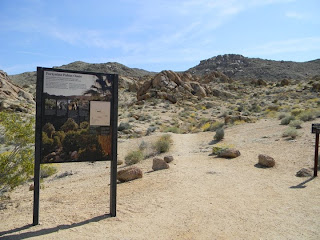 Follow the same directions as the last trip (I-10 to CA-62, then CA062 "east"). In this case, you go past the towns of Yucca Valley and Joshua Tree. As you enter the beginnings of Twentynine Palms, the signed road for Fortynine Palms Oasis trail will be on your right. It's about a mile and a half past the signed road for Indian Cove. 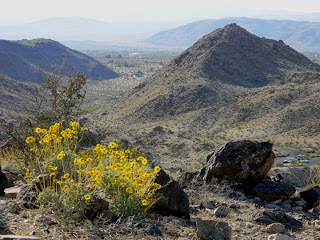 Follow the narrow and winding road as it just crosses into Joshua Tree National Park. Even when there is not a special event like National Parks Week, this portion of Joshua Tree does not require an entry fee. It is, however, day use, only: Sunrise to sunset, with a locked gate. 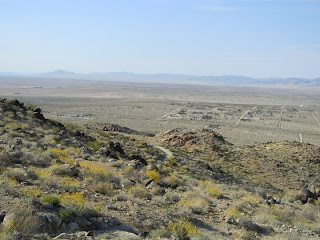 A pit toilet and trail display greet the hiker here. They also have a nice little chart for the trail, indicating it is three miles long, with about 275 feet of vertical gain both coming and going. 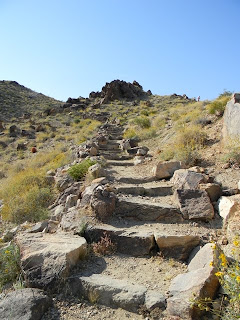 Although the overall steepness of the trail is less than many others I have taken, there are still some segments of rapid gain, indicated by nicely-built "stairs" on both sides of the ridge. This one here is on the return leg, just the other side of the ridge line. Like many desert trails, it's more the heat and dryness rather than the actual trail that wears you out. Well, that, and I was starting this trail right after finishing a seven mile hike during the hottest part of the day. :D 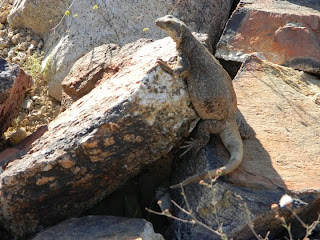 My car thermo-meter gave a reading in the high 80s, by the way. That's cool by desert standards, but still drying. I had plenty to drink, and the trail is short enough that if you avoid 95-110 degree days, it shouldn't be all that difficult (assuming you're prepared, of course). 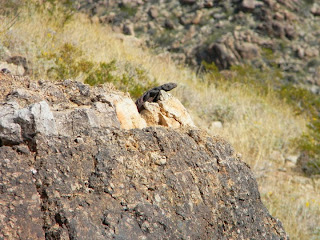 It obviously wasn't hot to all the chuck-wallas. I must have seen a dozen of them today, including a HUGE one that was just hanging out right next to the trail. The other ones I saw were all sunning themselves on rocks 10-30 yards off the trail. You sort of get the idea that they own the place. 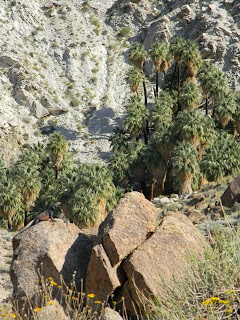 Unfortunately, most of my chuckwalla photos came out blurry. I really need to find out if there is a way to override the focus my camera wants to give, because when you zoom, it has a real issue with picking the right part of the frame to stay focused on. If only there was a way to use my old reliable SLR, but to shoot in digital. 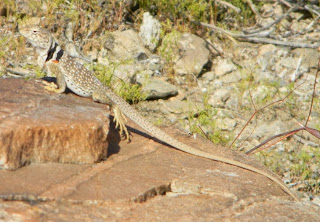 In addition to the many, many, many chuckwallas I saw and shot (poorly), and the many little guys that looked like common western fence lizards (which I did not shoot), I saw a couple of these guys, which (pending an official identification later) I'll call brown trout lizards, because they have a speckled appearance that reminds me of a brown trout. [Found pictures on-line that suggest it's a Great Basin Collared Lizard]. 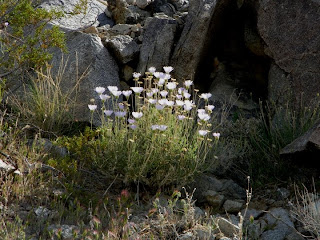 Plenty of yellowish flowers along the trail, but most were past-peak. I recognized my old friend, the Mojave aster, from last year. When backlit, they look almost translucent. 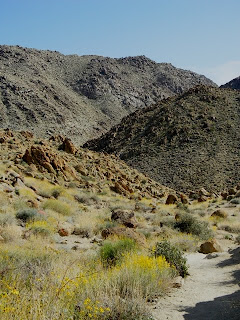 Creosote still had a trace of yellow, but most had the fuzzy seeds, already. Desert senna and brittlebush were present, along with desert sunflower. Most were already starting to fade. Desert mallow was also present, adding some reddish orange to the mostly yellow or whitish purple of the other flowers. Some purplish red of hedgehog catcus, too.

Even before you reach what I consider to be the ridge, you can see the large canyon below 49 Palms Oasis. If you look carefully, you can even see some of the palms. But obviously they look more impressive as you get closer. You can also see that they were scorched by fire at some point, although they are still growing thick and appear healthy.

The other thing nice about actually getting to the oasis is you can see the water (algae-filled) and hear the toads or frogs. You can hear them a little in the video I shot below (with my shadow on the palm beard). Unfortunately, the frogs must be too shy to be recorded, because they got quieter once I started shooting. :D

I also heard more than saw California quail. They don't like being seen or shot, either.

All in all, a very rewarding hike.
Posted by SkyHiker at 11:45 AM