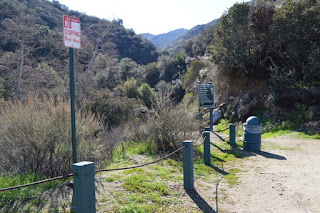 Hiked Saturday, February 9. Yeah, I'm still way behind on my hike write-ups, and not even going in order, any more. I guess the one good part about not being able to manage any hikes the last week is that I'm not falling any further behind in my blog write-ups.

This hike, now almost a month ago, grew out of my reading a post from Hiker Dan on his visit to the Verdugos, and it got me thinking about coming to this area. Never hiked here before, which is slightly surprising. It's not far from home (didn't time it), and it turns out I've driven by them often, but usually very quickly, in the Foothill Freeway, while shooting off towards Mt. Pinos or other points north. 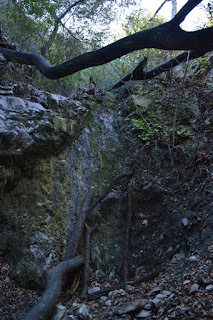 I had also overlooked them on my recent hike to Mt. Lukens and the Deukmejian Wilderness Park, above Glendale. That was another first-time visit, by the way.

But where to hike? So I pulled out my Tom Harrison Angeles National Forest Front Range map. It's a pretty large scale, especially for the Verdugo Mountains. But I could see that there was a trail that started off of La Tuna Canyon Road. Since I recognized that road from my travels on the 210, I figured that would be an easy place to find. 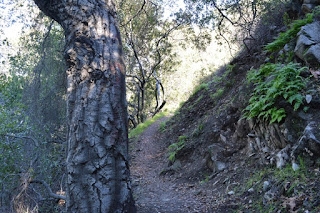 Unfortunately, I can't find that map now, as I do my write-up, so I can't give mileages. However, I did find this map on line, and I'm sure that the place I started from is marked "The Grotto" on this map." By this map, and the signs at the trailhead, I deduce that I was in La Tuna Canyon Park, one of many managed by the Santa Monica Mountains Conservancy. 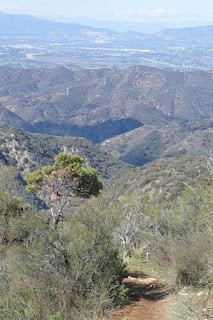 According to this map, it's 3/4 of a mile "south" (or west) of the Foothill Freeway (I-210). Exit at La Tuna Canyon (just a few miles west of the Glendale Freeway, CA-2, which, at this point, is NOT the Angeles Crest Highway!). I went under the freeway and headed south. Immediately after the freeway is a large parking area on the left. But I knew that wasn't the one I wanted. I continued a mile or so past that and saw another parking area, which didn't look like the one I wanted. Then, maybe 1/2 mile after that, was another parking area, which was the one I wanted. But I was already past it by the time I figured this out. There were plenty of cars there, too.

When it was safe, I pulled over, then made a U-turn and headed back north. I opted for the
empty parking area, on the assumption they would all link up someplace up the hill, anyway. 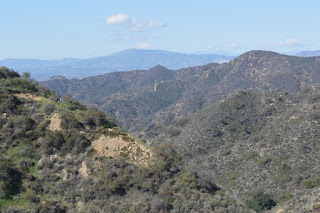 My trail dropped into a deep gully, where many tires and found their final resting place. Heading west, the trail was well-defined, though narrow. It headed into a ravine. After about 1/5 of a mile, it got steep, then reached a dead end at a drop that would probably be a very pretty waterfall if water were falling. Today, it was only seeping. And this was just a few days after a fair rain, with light snow falling higher up in the Verdugos.

I backtracked, and soon found what looked like a use trail that headed east, out of the ravine. After 100 yards and a bit of steeply eroded scrambling, I was on an improved, clear, but still narrow, trail. This one headed into the hills, as I expected. On the opposite canyon, I could see another trail, which I would later learn leads (after many twists) to the parking lot south of the one I was parked at.

Meanwhile, the trail I was on became clearer, and it was obviously an engineered trail, with rock and wooden supports in spots. I enjoyed expansive views to the west. Eventually, I made it to a ridge, and could see clear to the north and east, as well.

This trail ran along a ridge, finally reaching a dirt road (Verdugo Motorway, or Verdugo Mountains Fire Road) after what felt like several miles. Once on the dirt road, I made a left, as that seemed to be up. I soon passed adjacent to a plantation for trees. Several clearings and benches were also up here near the top ridgeline, as were a lot of radio and microwave antenna. 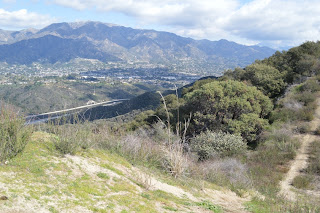 I continued along the ridgeway far enough to get a clear view over into the San Fernando Valley. To the southeast was downtown Los Angeles, which lay beyond the L.A. River. I could also see Silver Lake. To the right of Silver Lake was Griffith Park. Next was Forest Lawn.

Closer to me was a golf course, and a whole lot of other roads up into the Verdugo. Here, and later in my hike, I realized that the Verdugos have some pretty steep drop-offs. 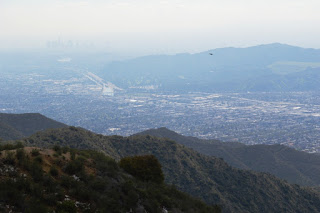 In the meantime, I needed to start heading back. Because I didn't want to repeat the up and downs of my way up here, I was leaning towards trying to get back via what I assumed to be a wider, more traveled, and less steep alternative. Given the lay of the land, I was pretty confident I could navigate my way back to where I started via a different route.

Thus, I headed down the motorway, assuming it would lead me to the larger parking area I had seen off of La Tuna Canyon.

I had barely started my way down before I saw my first and only significant wildlife of the trip. It was several hundred yards away, but I am pretty confident it was a coyote. 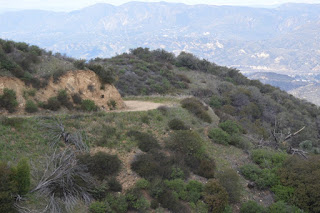 (There's a coyote in there)

Unfortunately, I didn't have time to switch to my telephoto lens. So I shot with wide-angle telephoto at 55mm. At full-size, the coyote is pretty invisible. At a crop, the creature is pretty fuzzy. Odd thing is the white tuffs at the end of his ears. Almost feline that way.

Wish I could have gotten a better shot.

I continued down the road. Several mileage markers were along the road, but it was not clear from my return what they were measuring distance to. In looking at my map, I'm pretty sure it would be Wildwood Canyon Park. 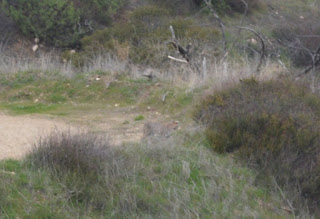 (Coyote, cropped, closer).
Regardless, long before I got to the end, I saw a side trail, heading to the west. It seemed to be a more direct route towards where I knew my car was, so I went that way.

This trail gave away altitude rapidly, which meant that if I was wrong, this was going to be a heck of a long way back. 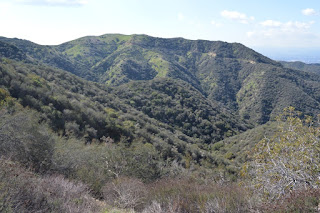 The good news is that the trail dropped right into the drainage I thought it would. It even came as close as 100 yards of the trail that ended at the dry waterfall. However, there was no easy way to cross that gap, so I wound up following the trail to what I later deduced to be the "main" La Tuna Canyon park and trailhead area. It was a winding way to get there.

It also left me about 1/4 mile down La Tuna Canyon Road from where my car was located. Not too big of a problem, of course.

I'm estimating about five miles for the roundtrip distance, though with a pretty large margin of error.
Posted by SkyHiker at 9:09 PM