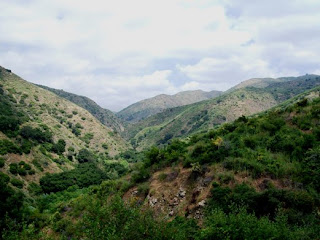 This was my third trip into Big Dalton Canyon. Last time, I stopped at Glendora City Hall on the return drive and picked up the "official" map of city trails in the Glendora Wilderness Park, so I could get a better handle of the trails here. However, I knew the trail map was going to be an iffy proposition. More on that, later. 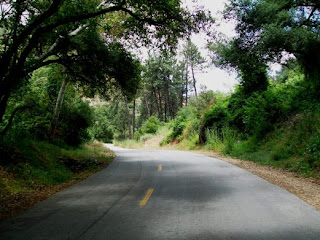 I reached Big Dalton Canyon by taking the 210 freeway, exiting at Grand Ave, and heading north to Sierra Madre Road. A right turn at Sierra Madre Road, then another three miles or so east to Glendora Mountain Road (passing Glendora Road along the way). I made a left on Glendora Mountain Road and drove about 1/4 mile north to Big Dalton Road. I drove this nice, winding road to near the gate that marks the end of public access roadway in the canyon.

I still wanted to take Glendora Wilderness Trail, but I still don't know if the trail actually exists (it is marked as "Under Construction" in the city map). According to this map, I should be able to take the Pavil Canyon Trail (marked "easy" in the map) no more than .3 mile up canyon to a junction with the Glendora Wilderness trail. 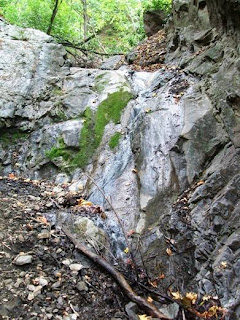 However, as with last time, I reached a 6-8 foot, steep rock barrier. If I really wanted to, yes, I could have scrambled up and around the barrier. But this did not seem possible to be part of an "easy" trail, and there was no signed junction with Glendora Wilderness trail reached, so I turned around. 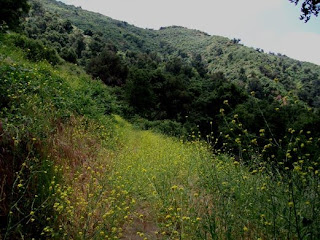 When I got back to the junction with the Keiser Trail, I turned left. This is marked as "Easy-Moderate" on the map, and .5 miles in length. However, I never saw where this trail should have ended. Indeed, even the lower portions of this trail were extremely overgrown. Blooming mustard, with bees buzzing all around, made pushing through those sections very unnerving. Other portions were overgrown with seasonal grasses, and those seed stickers were uncomfortable. 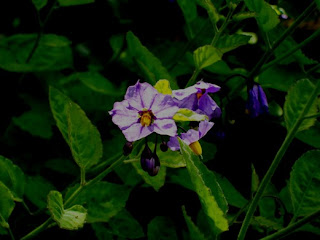 The trail I followed climbed up a side canyon, then followed a contour above Big Dalton Canyon to the southwest, in the direction the water flows down the canyon. I determined that at some point (with no sign indicating this), I must have gotten on to the Coulter Pine Trail. After what seemed like well over 1/2 mile, I reached a fork in the trail. The lower fork was probably a connection to the Dunn Canyon Trail, although there was no sign indicating this. The slightly better-defined trail continued along the contour downstream, above Big Dalton Canyon. After another 1/2 to 3/4 of a mile, the trail turned from heading southwest to heading northwest. At the same time, the trail was also recently maintained: nice, wide, and weed-free. It had the appearance of recently being weed-wacked, which was a nice change of pace from the overgrown feeling of earlier in this trail. 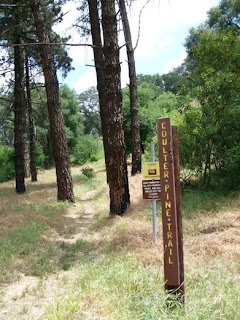 Eventually, I popped out in a small grove of Coulter Pines, which finally made clear to me why this trail was called the Coulter Pine Trail (There weren't any other pines passed along the way).

The map described this trail as "moderate-strenuous," and 1.4 miles in length. There definitely were some areas with a fair climb, but the thing that really made this trail strenuous was the overgrown nature of the trail.

From here, I walked down canyon, looking to pick up the Big Dalton Canyon Trail. I crossed a footbridge and caught the Big Dalton, heading down-canyon, again. Where it hits the Upper and Lower Mystic Canyon trailheads, I turned back to the road and crossed over to the Wren Meacham Trail. The map says it's 1 mile in length.

The Wren-Meacham trail started out easily enough, but I soon discovered why it had the "strenuous" designation. While I initially assumed it would simply parallel the drainage and run along the debris basin, in fact, the Wren-Meacham soon heads STEEPLY up the south face of Big Dalton Canyon. I find it very hard to believe that either mountain bikers or equestrians can safely descend the top end of this trail. Also, it, like portions of the Keiser/Coulter Pine trail, was extremely overgrown. 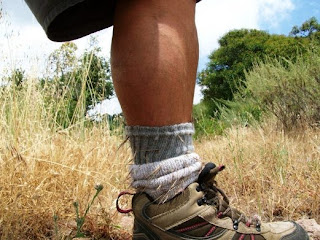 It wasn't very pleasant to hike, either. Again, there were areas where blooming mustards buzzed with bee activity, but I still had to push aside the plants to proceed. Thistle kept scratching my legs, and I again had to stop repeatedly to try to remove those grass seed stickers from my socks. I really hated this trail. I think the LAPD folks would call it a "Baker Sam Trail." I think the NATO folks would call it a "Bravo-Sierra Trail." It was just miserable. Probably long, sticker-proof pants would have helped, but I still think it's crazy to list a trail on a map and then allow it to become so overgrown.

Wren-Meacham ends in an equestrian center. The map told me I had just gone one mile from the start of this trail, although it sure felt like more. Walking around the equestrian center and eventually getting back to Glendora Mountain Road (GMR), I did not see where the Glendora Mountain Road Trail is. It does not seem to be immediately adjacent to the road. It may be that at some point it crosses GMR, then heads up behind the fire facilities I saw to the west of GMR.

In any event, I decided to walk along the shoulder of GMR, and soon came to the trail head sign for "Poop-Out Trail." Initially, I thought "Poop-Out Trail" meant this is the bail-out route you took if you started up Upper Mystic Canyon trail, but were too tired to continue. 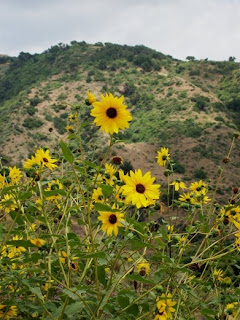 Nope. "Poop-Out" means this trail will absolutely kick your fanny. Although it's only 3/4 of a mile in length, it is even steeper than the Wren-Meacham trail. Some of the earlier portions feel like you're heading up 30 or 40 degree inclines. Fortunately, the ground mostly has good traction, and the "trail" is plenty wide. So, despite the incline (which I am NOT exaggerating!), it was a lot more fun than either the Wren-Meacham or overgrown portions of the Keiser/Coulter Pine trails. 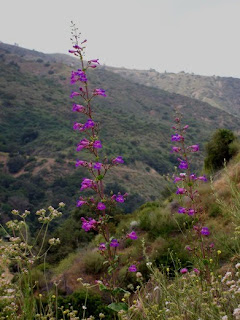 It was also relatively scenic, with thick blooms of bush sunflower, penstamon, cliff aster, and many other flowers.

Poop-Out trail ends when it intersects with Lower Monroe Motorway, a wide dirt road that continues on into the San Gabriel Mountains. I took about two miles of this road on an earlier hike. See hike 13, here.

The map lists Upper Mystic as strenuous and 1.0 miles in length. It may also be strenuous, but it's far easier than Wren-Meacham, that's for sure. 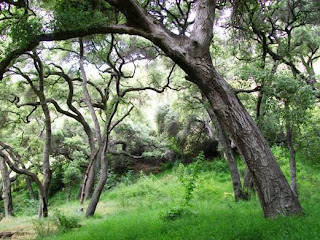 At the bottom, I was back on the Big Dalton Canyon trail, which I then took upstream, as far as it was defined. It's supposed to be 1 mile and easy. So, as with the Pavil Canyon trail, when it stopped being "easy," I turned around. Just before the "end," there were some nice sections of old oaks, which cut an impressive silhouette against the sky.

Given the mileages for the trail segments I know I walked (Pavil Canyon: .6 miles RT; Keiser: .5, although I did not walk all of it; Coulter Pine: 1.4 miles; Wren-Meacham: 1.0 miles; Poop-Out: .7 miles; Big Dalton: 1.0 miles), and that I doubled back on portions of the Big Dalton Canyon trail, and had to walk bits to get between the Coulter Pine and the Big Dalton Trail (very little) and the Wren-Meacham and Poop-Out (more--probably .4 or .5 miles), I'm estimating 5.5 miles total.

The horrible conditions of portions of the Keiser, Coulter Pine and Wren-Meacham trails slowed me down a great deal. But, despite all that, I still enjoyed my half-day of hiking.

Overall, the Glendora Parks map I picked up was only marginally useful. It provides an overview, but does not indicate altitudes. The ratings of "easy," "moderate," and "strenuous" aren't very helpful, and I have my doubts about the mileage indicated for the trails, and whether some of the trails even exist. Still, a bad day of hiking beats a good day of work, at least most of the time.

Other sights from the hike, in order, below:

1. A little cluster of blue flowers with the unfortunate name of "blue dicks."
2. Something that looks like monkey flowers, but are red instead of yellow/orange.
3. Cliff aster, with bee, buzzing around and getting ready to land.
[I've got many other pictures of the same flower, which I thought was a false daisy. However this new CD I just got, "Plants of the San Gabriel Mountains: Foothills and Canyons," identifies it as a cliff aster.]
4. Crop of the previous picture, zeroing in on the bee.
5. A red flower hummingbirds seem to enjoy. 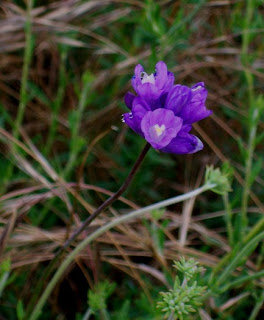 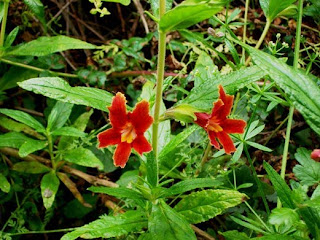 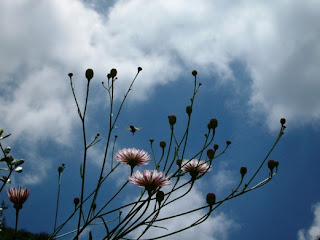 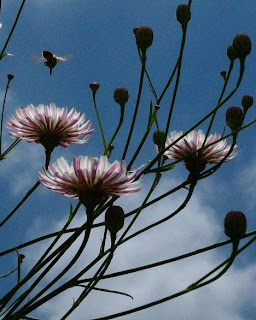 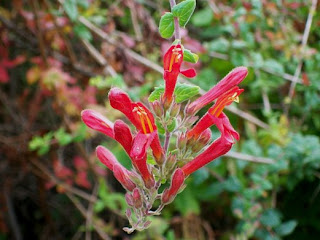