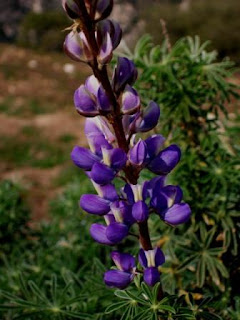 I was just over at Mark's Tales from the Trails, where he mentioned having hiked out of Bailey Canyon. I was going to link to my trip up that canyon. But then I checked my blog and discovered I never wrote up that hike!

Here's all I can recall: It was a dark and stormy night. No, wait, it was a dark and dreary day. But I had stumbled across the "Bailey Canyon Park" thing a few days previously, and thought it would be fun to add some variety to my just-beginning list of 100 hikes in 2010. So, despite the dreary weather, I went off into the mountains. It was Saturday, January 16. Just over two weeks previously, I was in San Gabriel Canyon, in 80-ish degree weather, laughing at the sight of willow trees that were still wearing their golden leaves that still hadn't fallen, even though we were nearly two weeks into winter.

That's what made the sight of a blooming lupine so funny. How can spring flowers be blooming almost before autumn leaves have fallen?

But I'm getting ahead of myself.

Bailey Canyon is in Sierra Madre. If you take Baldwin Avenue north, it's a bit west of Baldwin, on Carter. By contrast, if you take Baldwin north and turn east at Miramonte (just one block south of Carter), you wind up going right past a paved, private road called "Mount Wilson Trial," the paved, private road that you need to walk up at the start of the hike up the Mount Wilson Trail.

That puts the two trailheads only about half a mile apart, assuming you make all the correct turns. (On my last hike, I tried a "shortcut" that added over a mile to this walk!).

From the parking lot (which is supposed to be locked from dusk to dawn), you head west. There's a large sign with a map of the trails in the area. A bit further west, there's a trail sign: 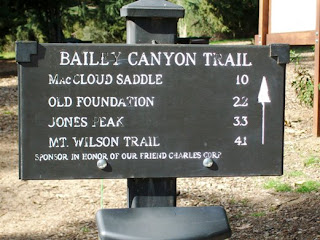 As this was my first trip to Bailey Canyon Park, I figured I'd also visit the waterfall. Guess what? It's not a lot to see. 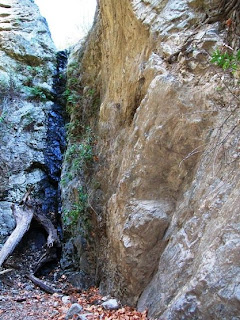 On this day (before the rains that came at the end of January), it was just a moist crack in the wall. However, because Sierra Madre closes this park in advance of and after rains (as a result of a tragic pair of deaths due to a mud slide a number of years ago), I think it must be pretty hard to visit when there's actually water coming down the falls.

I returned to the main trail and looked down at the monestery and the rest of Sierra Madre. This trail climbs pretty quickly, and there are a few places where cut switchbacks made it a little confusing about which way to go. Also, this trail is a lot narrower than many other trails in the area. It's not dangerous, but you do need to pay some attention to where your foot is going.

In addition to the "waterfall," there's the remains of a cabin up this canyon. At this point, higher up the canyon, there actually is (was?) water running in the creekbed.

After the cabin, the trail seems to get even steeper as it makes its way to Jones Saddle. From there, other trail reports have placed Jones Peak a mere .1 of a mile south from the saddle.

Because that seemed too easy this January day, I headed the other way, north, up the firebreak. A few hundred yards that way, I passed a home-made sign (laser printed white paper behind a plastic protector), indicating that a right turn there would take me to Little Santa Anita Canyon (I think it just said, "Mount Wilson Trail"). Going straight would eventually take me to the Mount Wilson Toll Road. Since I needed to get back to my car by dusk, I knew I couldn't go all the way to Mount Wilson. But I could go further up.

The second "hump" up from Jones Saddle (heading north) had a surveyor's landmark and a pole stuck amongst a pile of rocks, so I assumed this was a significant place. I stopped there, enjoyed the view, then headed back down. Upon checking a topo map later, I saw that this peak was about 4,000 feet high. Other websites suggested this was Hastings Peak (no doubt named after the same guy that Hastings Ranch is named for--probably also the same guy or family that UCLA's law school is named for, too). 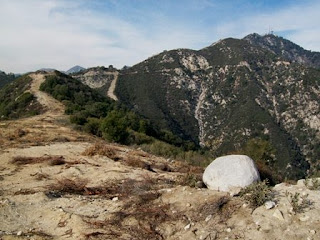 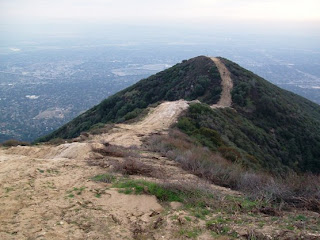 Meanwhile, if you look south from near Hastings Peak, you're overlooking Jones Peak and the whole San Gabriel Valley (at least if its clear).

It was between Hastings Peak and Jones Saddle that I saw the lupine, already in bloom (pictured at the top of this post). Just a few stalks were blooming on this very large, perennial bush. 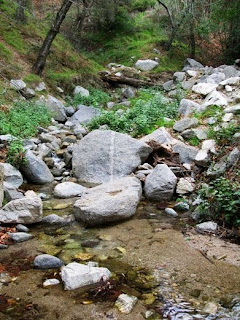 I decided to return via Little Santa Anita Canyon. The connector trail brought be to the Mount Wilson Trail just a half-mile or so beyond First Water. It was a quick walk down to Sierra Madre from there. From there, a half-mile on surface streets brought me back to my car. Probably 7 or 8 miles total hiking for the day.
Posted by SkyHiker at 7:58 PM