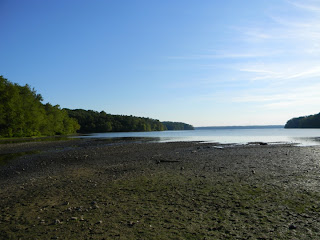 Hiked Thursday, August 30. This was an "exercise" hike, meaning I didn't expect to have much in the way of views. I just wanted to get on the trail asap. Also, having visited Golden Pond twice in the previous three days (once for some astronomy outreach, and once on my own, to view Comet Garradd), I like the idea of getting to my destination in less than 1/2 hour. 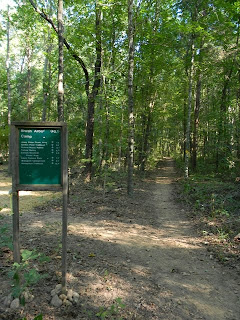 To get to the Golden Pond trail head from US-68/KY-80, exit on The Trace and head south. Go past the main planetarium/visitor center entrance, and turn left about 1/8 of a mile later, following an arrow indicating "Administrative/Law Enforcement." Almost as soon as you turn, you'll see the gravel parking area on your left. A porta-potty and vending machines are also here.

The trail starts heading directly back towards The Trace. You cross the highway just north of the road you just took to get here. Once across, you soon intersect the main North-South Trail. A two-sided sign indicates distances to various points north and south of you.

If you head north, you weave around the area for maybe 1/2 mile before popping back up on the west side of The Trace, just 1/4 mile further north from where you crossed it the first time. The trail then runs along the west shoulder of The Trace, until shortly after you pass under US68/KY80. Your path then takes you west, again. For much of the hike, you parallel a fair-sized creek bed. Today, the creek was almost entirely dry, but erosion has clearly worn quite aggressively under some trees along the way. The water must run pretty strongly during the spring. 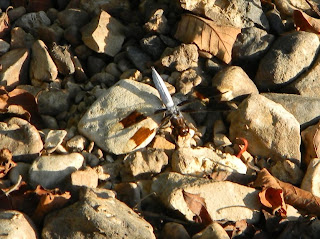 By late summer, however, the very small watershed of this particular hollow dries up. Many of the shrubs along the way looked stressed by the heat and/or lack of water. Red bud leaves were turning yellow, and what looked an awful lot like persimmon leaves were already red or orange.

Not much of a view along the way. For much of the hike, hills were on either side, and you couldn't see the forest for the trees. Just before reaching the turnoff for Dead Beaver campground, however, Kentucky Lake came into view. 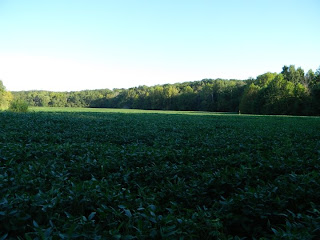 At the end of my trail, I took a short walk a part of the way towards Dead Beaver camp-ground, and came across a field of soybeans. Corporate farmers have gotten permission to work some of the land in the LBL, which has annoyed the families of former landowners, which were forced out of the area when the NRA was created.

I also walked down one of the (mostly) dry creek beds, and got a peek at Kentucky Lake (pictured at top), before heading back.

Total mileage for the day was about 9.8 miles. The sign at the junction for the spur trail to Dead Beaver Campground said it was 4.8 miles back to Golden Pond. In addition to the there-and-back walk, I took two roughly 1/4 mile RT detours: one to see the soybean field, and one to see Kentucky Lake. However, on my return, once I passed back under US68/KY80, I figure I saved about 1/4 by just walking along The Trace rather than following the actual trail that last bit.
Posted by SkyHiker at 7:08 PM