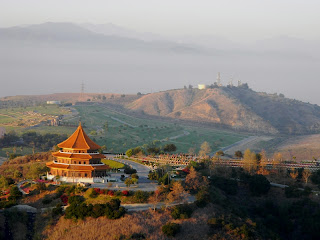 Over the past few weeks, I determined that daylight was lasting long enough that I could manage a short hike in the Puente Hills after work. I get off at 4pm, and I'm working about 20 minutes south of the Puente Hills Landfill Native Habitat Authority lands that marks the southern boundary of the east San Gabriel Valley. 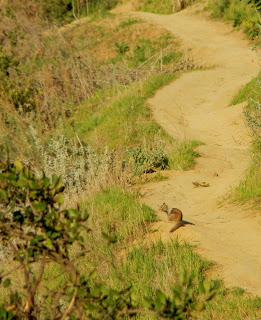 The trail map is here. Hellman Park is on near the northern end of Greenleaf Avenue in Whittier. From the San Gabriel River Freeway (I-605), Beverly Blvd east should get you there. There's some construction going on around Beverly, but I'm pretty sure it still goes through. When you reach Greenleaf, head north a short block. That's Orange Drive. The entrance to Hellman Wilderness Park is on the right side of the street, just past Orange. They suggest using 5700 Greeleaf Avenue to google or Mapquest for driving directions. 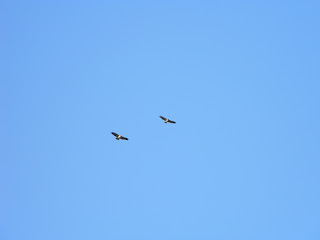 The parking lot there has room for about 8 cars. There's a large topograph-ical map display at the trailhead. 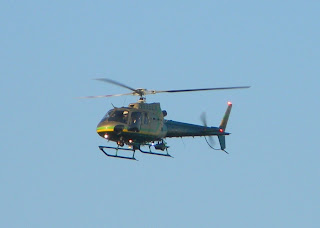 Either route is quickly gains altitude as you climb into the hills. Both trails claim a 350 altitude gain along the way, and both link up with the Rattlesnake Ridge trail that runs east-west along the ridge. Take the Rattlesnake Ridge trail east and it would also soon link up with the Schabarum/Skyline/De Anza trail, which continues east towards Schabarum Park.

Canyons drop steeply off, no matter which trail you take. That's part of why this place is still open rather than tract homes. 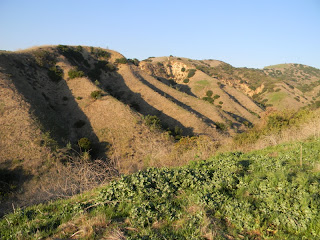 I saw many red tailed hawks cruising the area, looking for rodents. One pair, in particular, few circles around each other.

I also saw a number of squirrels, gophers, rabbits, and other creatures rustling in the brush, and occasionally poking their heads out.

Meanwhile, an L.A. County Sheriff's Department helicopter made a quick turn through the hills.

After starting up on the Peppergrass trail, I took the Mariposa Trail, which hugs a canyon. There used to be a large tree with a tire that swung precariously over the canyon, but the tree appears not to have survived the recent windstorms. 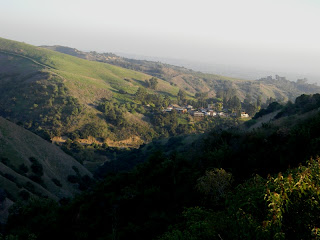 The Mariposa Trail soon rejoins the Pepper-grass Trail. Views to the south and southeast overlook Whittier and Turnbull Canyon. There's a trail that runs down there, too. I may hit that trail after some other day of work.

The Peppergrass trail made its way past a rounded peak. A steep use trail headed up to the peak. My path looped counter-clockwise around the peak. 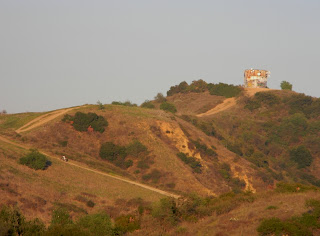 When it go to the northeast side of the peak, the Pepper-grass hits the Rattlesnake Ridge trail. I made a left. From there, you have a clear view to the north. A large "Asian" pagoda stands watch on the other side of the canyon. Beyond that is a more "American" chapel, and beyond that is the large watertank that I walked past on my first hike of the year, also into the Puente or Hacienda Hills. The San Gabriel Mountains poked above the haze in the distance. 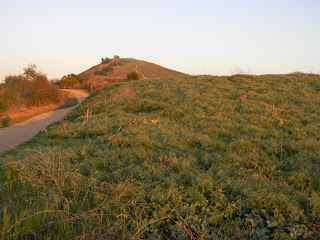 As I came around the peak, another use trail headed up from the west side. Since my planned loop was only going to be 2.9 miles, adding a charge up and down this hill would add the necessary distance to let this count as an "official" hike. So up I went, the roughly 1/10th or 1/8th of a mile to the summit. The topo map I linked above says this peak is 1197 feet above sea level. With my car parked down on Greenleaf, at an altitude of 460 feet, that mean a total of 737 feet of net gain for this hike, and a total distance of about 3.1 miles.

On my home-going leg of the loop, I got to watch the sun sink into the haze, disappearing what seemed like a solid bit of ground. I don't know the geography and geometry of where I stood and where the sun set, so I'm not sure if that was mainland or island that it was setting behind. But it was a nice sight. 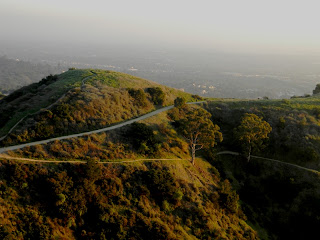 Got back to my car about 6pm, meaning I had some margin for error on this hike.

Might even try an after-work Griffith Park hike in the next few weeks, or I might wait until after daylight savings time kicks in.

By the way (mostly unrelated note), tomorrow night, as the sun sets, the crescent moon will be pretty close in our line of sight to the planet Venus. They'll make a pretty impressive sight. Jupiter will be a bit to their upper left. If the weather is clear (not a sure thing, given the fog that has rolled in the past few nights), I'll be joining my friends in Old Town Monrovia for some sidewalk astronomy. Visit their website for more information.
Posted by SkyHiker at 10:10 PM