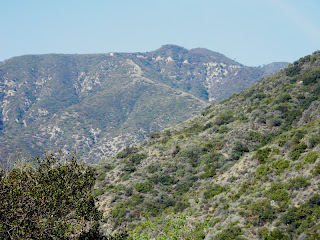 Hiked Saturday, February 18. After reading this story in the San Gabriel Valley Tribune, I decided to visit the area today. I googled "Monrovia wilderness preserve" and looked at some google maps to get an idea of where access might be practical. Then I drove up there.

I took the 210 Freeway to Myrtle, headed north (going right pass my usual sidewalk astronomy site, at Myrtle and Lime, where I'll likely be next Saturday with my telescope--Venus, Jupiter and the moon will be on tap) to Foothill Blvd. I made a right there, then a left at Canyon. 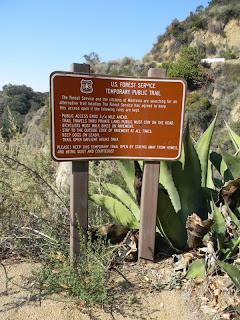 After about 2/3 of a mile, Canyon makes a right turn at an intersection and shifts from heading due north to due northeast. The second street on the left after the split is Ridgecliff Drive. I made a left there. I drove slowly and carefully along this narrow, winding residential street, and kept an eye out for possible points where the Lower Clamshell Truck Trail intersected with Ridgecliff. 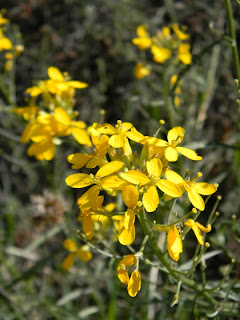 Eventually found one (forgot to note the street number). It's on the left, about a 1/2 mile after the street started and about 150 yards before Ridgecliff curls sharply to the right and begins a descent. (In other words, if you reach that point, you've gone too far. A small sign on the right side of this "driveway" says, "Walk bicycles" and "Stay on Outside Edge of Pavement."

Construction is currently (February 2012) ongoing as a new home is coming up on the parcel at the corner of Ridgecliff and Lower Clamshell. About 50 yards up this road, there's a "Road Closed" gate, next to the sign photographed above. 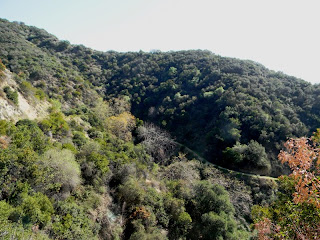 The sign says public access ends just 3/4 of a mile ahead. However, the sign is apparently somewhat out of date. It appeared to be slightly over 2 miles before I reached a "Private Property" sign. I was told the 3/4 mile referred to a point where a landslide once closed the road. 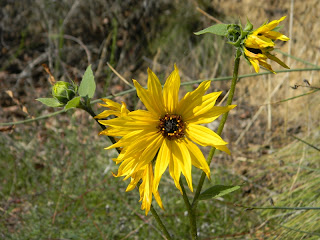 At the gate, you'll have to crawl through or climb over the gate to start your hike. Once past the gate, you begin a pretty immediate weave, with the mountains mostly on your right and the San Gabriel Valley on your left. This truck trail is easily visible and labeled on google maps, which shows that the road continues all the way to Arcadia Wilderness Park. 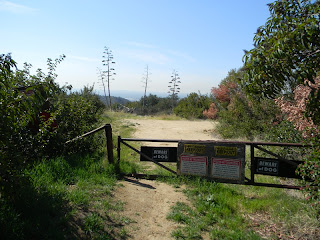 Unfortunately, it does not appear that public access is permitted between these two points. The "No Trespassing" and "Keep Out" signs on the gate certainly suggest not. On the other hand, the other side of the gate also had "No Trespassing" signs on it, but clearly, here I was, standing on the other side, without having ignored any no trespassing signs to get here. Also, I have come across and/or am aware of a number of other places where residents place "No Trespassing" and "No Parking" signs where parking or access is, in fact, legally protected. It's sometimes residents trying to secure public lands for their own use, or exclude the public from accessing public lands. Don't know if that's the case here, though. 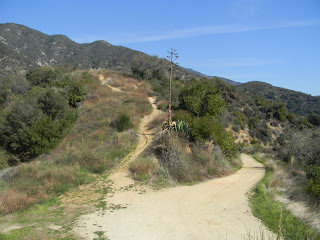 Since I wasn't sure, I turned around at the second pictured gate. I may call Monrovia and/or the USFS to find out if there is an easement or legal access to cross the private property in the future. 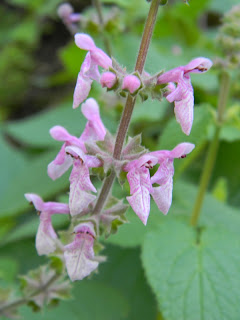 The sign at the start of the hike notwithstanding, I did walk along a few of the more obvious use trails that branch off Lower Clamshell Road. The thickest set of these trails is where the truck trail reaches a saddle. One use trail heads steeply to the northeast, towards a small oasis of palm trees. I was told a homeless person lives up there, and also that this trail used to (and may, again?) go over into Monrovia Canyon.

Didn't walk that one. 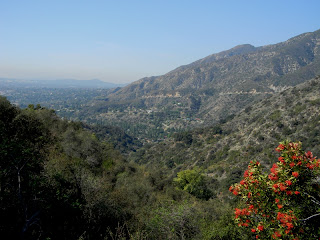 Another use trail splits off and heads to the southwest, to a slightly higher point, on which was an L.A. County surveyor's monument (I did walk there). Just past the monument was what looked like a 400 or so square foot area, under trees and looking like a large tent. I suspect another homeless person may live there, so I turned around.

The third use trail headed north or northwest, dropping down in altitude a bit and paralleling a pipe structure that still funnels water down to the residents below. After about one mile, it led to a small waterfall (the first of many, I was told), though the water flow as low. It came down in a broken sheet of water about 2 feet wide and dropped about 20 feet. 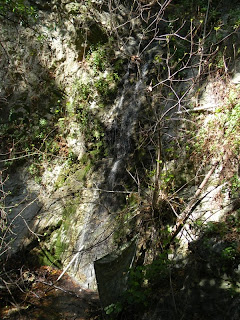 At the bottom of the falls was a tarp, tied to the side of the cliff, and intended to either partial shade the water to keep it cooler, or perhaps to be used as a shield when the homeless guy up the cliff came down to shower.

I hope this doesn't sound too cynical, but seeing as how several people are apparently living up here (and have for quite some time), I don't understand the alleged fear of certain property owners in the area that opening the area up to more hikers is somehow going to increase the fire danger. 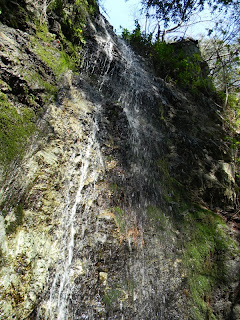 Total distance for the day was about 6.5 miles. The person I chatted with as I hiked a good part of this trail said it's 5.1 miles roundtrip from gate to gate, although my walking time seemed too fast for that distance. I'm thinking more on the order of 2 miles or so--with the saddle being more or less the midway point.

The person I ran into also said it's about 3/4 of a mile from the road to the first waterfall. I think it might be closer to a mile, but 3/4 of a mile would not be inconceivable. The short use trail I took to the surveyor's monument was probably about 1/2 mile roundtrip. That's why I'm going with 6.5 miles as my guess.

The trail to the waterfall was very narrow and crumbly, sort of like heading towards Rubio Canyon. Not as steep, but quite narrow in places and impossible to traverse without pushing down some soil and gravel into the ravine bottom. It's been substantially improved in places, with metal bridges and soil stabilizers, but it's still a tricky walk. There's also a lot of poison oak along this narrow trail, and, I am told, lots of ticks once the weather warms.

Not sure if I'll come this way again until I figure out better which areas are legally accessible and which are not.

Nice views from the saddle (and pretty much all along the truck trail). From there, you can look northeast, to the road that heads to Chantry Flats. You can also see the flat radio structure that's at the end of the paved/dirt road that continues above Chantry (that you need to walk some of to get to the upper Winter Creek trail). 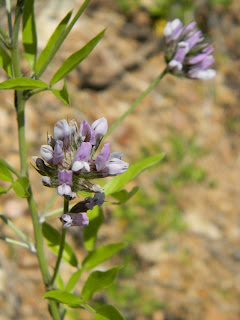 Nice views over Monrovia and Arcadia, too. I'm sure when it's clearer, the ocean and Santa Catalina Island would be easy. Today, I could barely make out downtown L.A. through the haze. The Santa Ana Mountains were also tough.

Some wildflowers blooming along this trail. Some are old friends with names I remember (Spanish broom, bush sunflower), some are familiar ones with names I don't recall, and some were entirely new to me.

Short video at the end of the waterfall, shot from up-close.