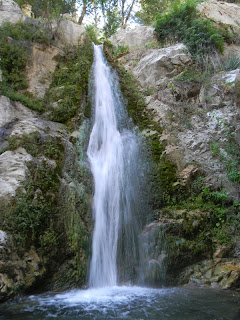 Hiked Tuesday, July 17. This was actually two separate hikes, but the first one was not long enough to qualify as a hike by itself. It's only about 1 mile roundtrip to Lewis Falls. After I finished Lewis Falls, I hopped in the car and drove up to the end of CA-39, then walked up and along "Smith Ridge." That hike was probably about 3.5 miles by itself, so figure about 4.5 miles for the day. That'll be Hike 2012.047B.

First, Lewis Falls. I last hiked there just over a year ago. To get to the trail head, exit the Foothill Freeway (I-210) at Azusa Avenue and head north. As you approach the mouth of San Gabriel Canyon (about two miles from the freeway), you'll note the first of many white mileage marker signs. I don't remember exactly, but I think the smallest one I remember seeing around here is something over 14 miles. So figure on driving about 21 miles total from the freeway, past the two large dams, pass the turnoff for the East Fork, pass the OHV area, pass the West Fork Trailhead, pass Coldwater Campground, past the turnout for the Upper Bear Creek trail. Just at mile marker 34.54, you'll see a large, rusted sand dispenser that's been there for at least a year, even though it looks like Caltrans is done working the area for now. 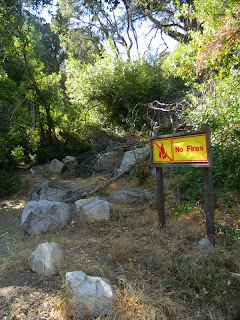 Right after the sand dispenser, the road makes a sharp right, then a hairpin turn to the left. At the apex of that turn is a small, yellow "No Fires" sign, and room for 2 or 3 cars to park. There are also small turnouts on the opposite side of the road, both before and after the turn.

The trail is not otherwise marked. 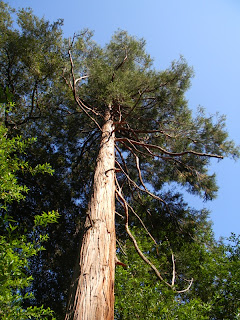 Your walk takes you pass the No Fires sign. Resist the temptation to immediately drop to the creek level. Instead, stay on the trail. After about 60 yards, you'll pass directly adjacent to a large evergreen, which I assume to be a red cedar. It won't have needles, but, instead, it has almost fan-shaped branch tips. The bark is thick and slightly reddish, too. It's also the first tall evergreen you'll pass, so it should be easy to recognize. 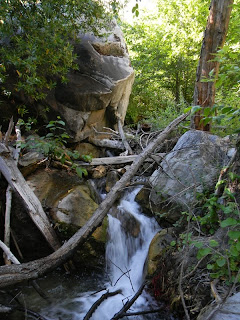 As soon as you pass this tree, the trail you want to follow will be zipping off to the right, at a 90 degree angle from your original direction of travel. You go up and around a cabin with the numbers "123" on it, and in front of other cabins. You'll soon also be crossing the foundations and yards of cabins that are no longer there, with stone steps to guide you in spots.

Most of the trail along this section is well-defined, and walkable without too much ducking. It seems a lot of work has been put in to clearing this trail over the past year. 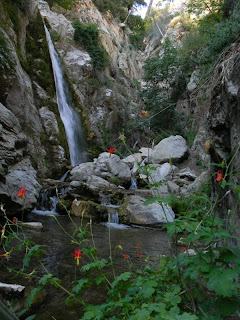 After about 1/2 mile, the trail drops down to the creek level. My recollection is I only crossed the creek once or twice. At creek crossings, it is clear that plenty of dead wood still lies atop and across the stream. The good news is that the fallen timber sometimes provides a clear path across the water.

This time, when I approached where I knew the falls would be, I stayed on the left side of the stream. It did require a little ducking and stretching, but it was not too hard to get to the pool level. 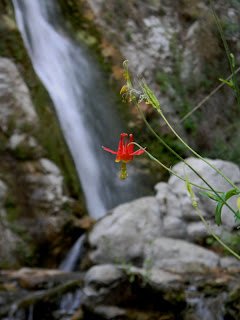 With the water running lower than last year, it was easy to get from the left side of the pool to the right side of the pool. From there, I could take a more or less face-on shot of the waterfall, which is at the top of this post. I also took a number of "profile" shots. For some of those, I stepped back 10 or 20 yards from the pool and shot near a patch of columbine, which was exactly where it was the last time I was here.

I also shot some close ups of the flowers, with the falling water as an out-of-focus backdrop.

Short hike, though with an impressive pay-off. Also, on the weekday afternoon I went, I had the trail to myself. That would never happen at Eaton or Sturtevant. Still, you'll need at least average dexterity to navigate the fallen timber. Because of the drive involved, you'll probably also want to combine a visit to this falls with another short to medium hike elsewhere in the canyon
Posted by SkyHiker at 3:48 PM