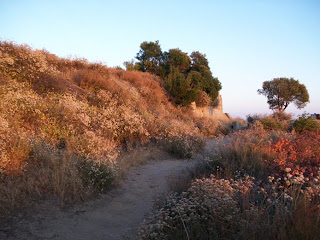 Hiked Sunday, July 22. This was another hot day, and I spent far too much of it doing very little. Finally, as 6pm approached, I just *had* to get out and take a walk. With a late start, I was limited in my choices. Initially, I was leaning to a regular Echo Mountain trip. Then I thought it might be too crowded, it being such a wonderful afternoon for hiking. So I wound up trying the access from Pleasant Ridge Drive, again. The description to the Pleasant Ridge access is noted in the linked post, as is the Camp Huntington access. 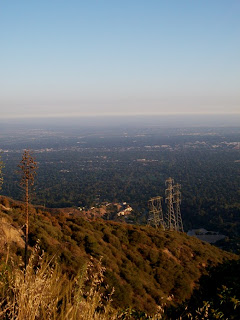 The trail from Pleasant Ridge was the primary access point to Rubio Canyon for years. It also had a steep access trail from near the canyon floor all the way up to Echo Mountain. That rail leaves the Rubio Canyon Trail just about 3/4 of a mile in.

In the last few years, several new options have been added to the Rubio Canyon Trail. In particular, there was a new steep access trail that starts about 1/10th of a mile in and heads on up to intersect the Sam Merrill Trail at roughly the Sam Merrill's halfway point from Lake Avenue to Echo Mountain. 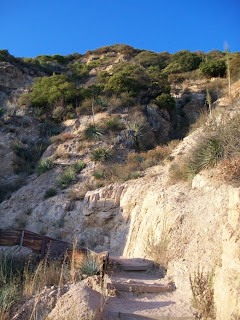 That's the path I took this day. It feels like it's become steeper since my last visit, though, unfortunately, it's really just that I've gotten fatter and more out of shape. It has, however, become somewhat more overgrown. The trail was narrow to begin with (a work in progress), and erosion from use and plant growth have encroached further into the pathway. As I climbed, I could not help but rub against sage and other plants. I stopped regularly to check for ticks, but found none.

Finally, feeling quite tired, already, I arrived at the Sam Merrill Trail, just below where that trail passes under the electrical transmission towers. There are now three towers there, thanks to the progress of the Tehatchapi Renewable Transmission Project. I keep mentioning this project because it seems like the new lines are going everywhere I already hike. 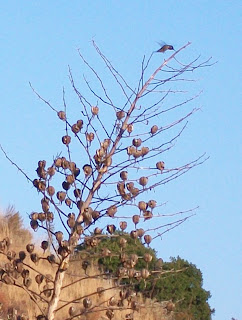 Progress improved once I reached the regular trail, and I sped on to the Echo Mountain station, arriving just 15 minutes or so before sunset. As I approached the station, the setting sun helped light the abundant dried buckwheat blooms a nice, warm, orange-red. That's the picture at the top of the post.

I snapped a few pictures near the old tram station, then contemplated my return path. I thought I had walked through too many bushes on the way up, and felt like I was just asking for a tick to bite me. Foolishly, I decided that continuing east from Echo Mountain, heading down the steep trail to reconnect with the Rubio Canyon Trail. 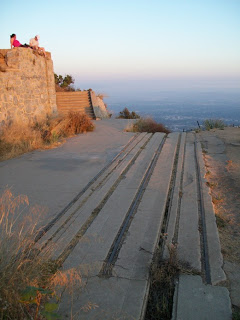 How was this foolish? Let me count the ways.

1. This trail down to the Rubio Canyon Trail is much longer and more overgrown than the one that starts closer to Pleasant Ridge. If the latter trail was asking to be bit by a tick, this one was asking, even louder.

2. This trail is on an east-facing slope, so you lose light quickly, much quicker than just heading down the wider and quicker Sam Merrill Trail. 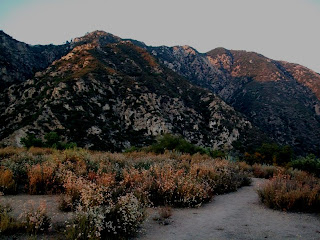 3. This trail is steep for a lot longer than the other connection to the Rubio Canyon Trail, so you're descending steeply in fading light for a long time.

By the time I got to within about 100 vertical feet of the Rubio Canyon Trail, the light was completely gone. I could no longer see the ground clearly. If I hadn't hiked this trail many times before, it would have been even riskier to be descending in this dark. 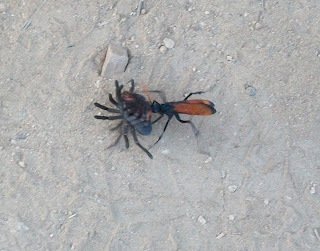 Finally made it back to the Rubio Canyon Trail. I had to navigate the base of the pavilion in the dark, too. From there, it was easy enough, though, again, if I didn't already know where the drop-offs and narrower trail areas were, it would have been pretty spooky. 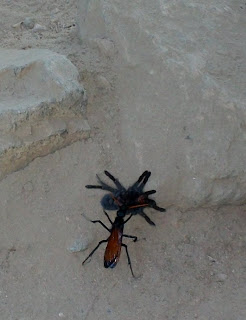 The lesson learned should have been, "Don't try exploring rugged or unfamiliar trails when you know you're running out of time." However, in a few days, I'll post about yesterday's adventure around Little Santa Anita Canyon. It's possible that the lesson may finally have been hammered home.

On the other hand, if not for the timing of my adventure, I would have missed seeing something I only saw on nature shows before. I saw a tarantula hawk dragging a paralyzed tarantula to become food for a wasp's future larvae. I took plenty of pictures, but also tried to maintain a fair distance. The wasp is really large, seemingly longer than the 2 inches various on-line sources say they grow to. And, even before reading that, I figured that if she can sting with enough venom to paralyze a tarantula, it would probably hurt me a whole heck of a lot, too.
Posted by SkyHiker at 7:13 PM