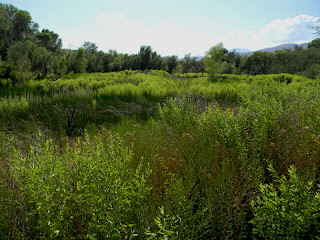 Hiked Saturday, July 21. I spent much of Saturday morning (and afternoon) trying to decide what to do with myself. With a thin crescent moon scheduled in the evening sky, this was not an "official" dark sky weekend (a weekend when, with no moon in the sky, the dimmer, "deep-sky" objects--galaxies, star clusters, supernova remnants, and other nebula -- are most visible to earth-bound amateur astronomers. 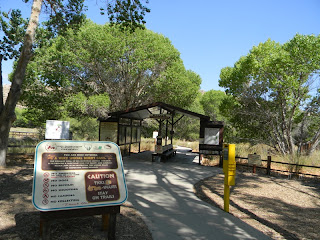 However, because of the geology of the moon and the geometry of the earth-moon system, a thin crescent is pretty much as good as a dark sky weekend. The moon isn't very reflective, and most of what little it does reflect goes straight back in the direction of the light (the sun). So, for example, a first-quarter or last-quarter moon (half illuminated) is not nearly half as bright as a full moon, a full crescent (25% illuminated to our point of view) is FAR less than 1/4 as bright as the full moon, and a thin crescent (only 10% or so illuminated) is FAR, FAR, FAR less than 1/10th as bright as a full moon. Plus, it'll set within an hour or so of the sun, so once the sky starts getting dark with the sun far enough below the horizon, the moon is also dropping down there, too. 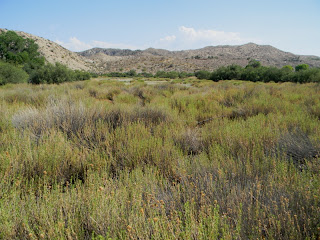 So I spent much of the day on Saturday trying to decide where to go for my astronomy viewing, and, depending on that, when to leave and if I would also be able to incorporate a hike.

For various reasons, I settled on Joshua Tree. In past years, we used to join the Andromeda Society, an amateur group based in Yucca Valley, CA, on their outreach nights there. Following a series of member deaths, that organization seems to have become deactivated, with the remaining active members forming the Southern California Desert Video Astronomers group.

It's my impression that the NPS has taken to doing their own astronomy outreach in Joshua Tree, though that would have been held the previous weekend. 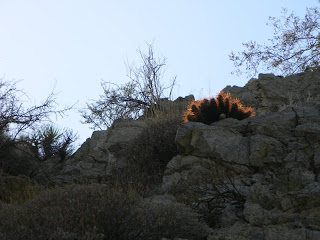 Because of all that back-ground, I have a soft spot for doing astronomy in Joshua Tree. Besides, it's got plenty of parking lots with vault toilets, so you can set up your telescope on a solid, flat, not-entirely sandy location, right next to your car, and with restroom facilities right there, too. Generally, they allow folks with telescopes to set up in the day use areas, provided you are actually observing and not trying to get a free camping spot.

I finally left home for Joshua Tree in the early afternoon. Because the goal is astronomy, there's no reason to get there too far before dark. And, because of the heat (low-100s predicted for a high), I was unlikely to want to take a long hike before my astronomy, anyway. 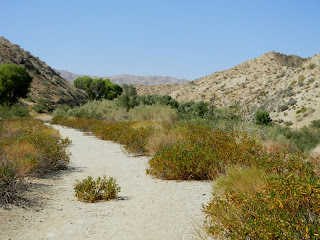 From I-10, I took the exit for CA-62, which is signed for Joshua Tree National Park, and would also take you towards Desert Hot Springs, Yucca Valley and 29 Palms. After approximately 12 miles, I came to a sign for Big Morongo Canyon Preserve. This would be about two hours from downtown Los Angeles.

I had passed this sign many times, but never stopped to visit. Today, with no particular hiking plan, and the goal of merely killing time until dark, I decided to explore this preserve.

After a right off of Highway 62, the entrance to the preserve was just a few hundred yards down this well-worn road. The entrance was a mixture of pavement and dirt, to a large parking lot. 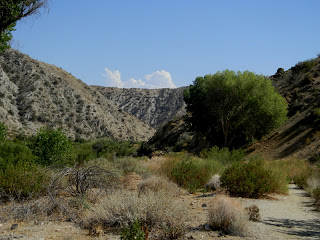 At the end of the parking lot was a large kiosk, well-stocked with flyers and maps. I grabbed one of several and studied the map. Funny thing about the map by the way: North is DOWN. It actually makes some intuitive sense because of the relationship between the trails and the parking lot, but it's still upside down from what you normally expect.

The map is linked here.

The inverted map had color-coded trails looping within the area immediately around the kiosk, and I saw that it was possible to assemble a three-mile walk without leaving the immediate area. My initial inclination, then, was to walk these loops until I had my fill. So I grabbed two 1/2 liter bottles of water and tossed them into my backpack. And away, I went.

As I passed several trail signs along the way, I noticed the "9-mile round trip" trail into Big Morongo Canyon. No way was I going to go that full distance in this heat and with the little water I was carrying, but I figured I might head out at least to the first big turn in the canyon, just to see what was around the corner. So I started out on the Marsh Trail, then took the west side of the Mesquite trail. Along the Marsh and Mesquite trail sections I walked, the trail was a plastic "boardwalk" built, in part, from recycled milk containers. Convenient for staying dry when standing water was all around you. 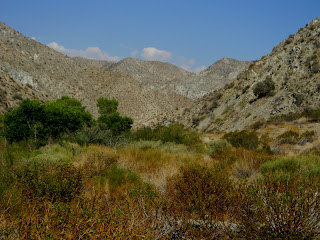 It turns out that this preserve is set in an oasis, with cat tails and other marsh plants surrounded by high desert. There's a fault here, so water seeping down from the hills rise to the surface at Big Morongo. This made the preserve unexpectedly lush and well-shaded. Mesquite, willow and sycamore were native. There were also some tall palms.

At the end of the Mesquite trail, the boardwalk ended, and I began to walk on sand. The canyon walls rose steeply on both sides, with a green thick lane of greenery running down the middle. This was the outlet for the oasis at Big Morongo. Didn't see any running water, but the abundant cottonwood told me that water couldn't be that far beneath the surface. 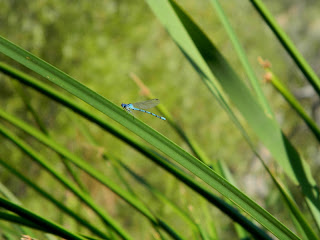 After 1/3 of a mile, I reached a wooden gate with a zig-zag opening. There, the West Canyon Trail headed to the right (west). The Canyon Trail continued straight ahead.

Rather shortly, I came to a .5 mile marker. "Well, that's convenient," I thought to myself. I figured I'd head to the one mile point, then turn around.

The .5 mile, by the way, certainly referred to the "distance on dirt," which started where the Mesquite Trail ended.

The trail here was dense, with flowering plants close in on both sides, and bees pollinating on both sides, as well. Still, I always figure they've busy doing their work and wouldn't have time to mess with the big oaf walking past them. And, sure enough, they left me alone and I emerged on the other side unstung. 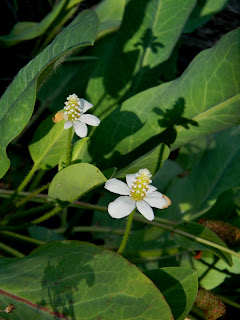 Meanwhile, the next half-mile, turned out to be much longer than expected. I was sure I had gone well over that distance with no sign in sight. At last, with the water supply approaching 1/2 depleted and me feeling the effects of walking in 100 degree heat (though with ample shaded areas along the way), I decided, "OK, at that next rise, I'm turning around, sign or no sign."

When I got to that rise, there WAS a sign: 1.5 miles! Don't know if the 1.0 mile sign has fallen or never was, but what was explained was why that last 1/2 mile seemed so long!

Good turn-around point, too. It was on a bit of a rise, and gave a good view down the canyon, and at the hills beyond. You could also look back where you came. And with my having covered 1.5 miles, already, I was guaranteed of covering my arbitrary minimum of 3 miles for the day's hike to count towards my potential 100 for the year.

About 1/2 mile back, the front 4 inches or so of my boot sole separated from the rest of the boot.

Crap. That was weird. Didn't feel like I was evening putting any stress on the seam when it happened, either.

Still, I knew I only had about a mile more to go on flat and mostly sandy earth, before the boardwalk would begin. Then, even with no boot, I'd be fine. 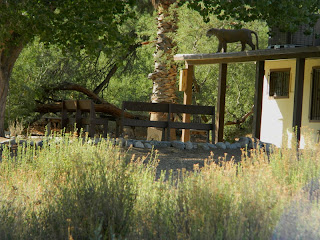 Also amusing to see was the large cougar-thing on the roof of the educational building.

Made it back to the car with my boot sole still hanging on.

Drove on, further east on CA-62, through Yucca Valley, and on, to the town of Joshua Tree. Once there, just before Park Blvd, I stopped for dinner, before continuing on to my astronomy destination. I also stopped for another, short hike, later that afternoon. That'll be the next post.

For this post, I can report 4 1/3 miles for the hike. Easy enough for kids, especially if you stick to the boardwalk areas, and as long as you're cognizant of the heat (if you're visiting in the summer). Keep the kids hydrated (they dehydrate faster than adults, and don't always know to drink, or to slow down in the heat). Also, keep them from messing with the bees!

Dogs are not permitted on these trails.
Posted by SkyHiker at 10:39 PM