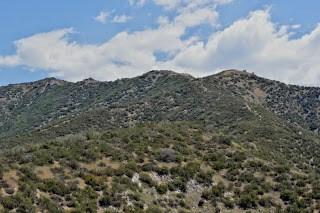 Hiked Sunday, May 25. One of my older hikes still to be blogged. Thought I'd go back to this one because of the name: I just hiked and blogged a hike in Wildwood Canyon Park in Burbank. Obviously, this one, in Yucaipa is nowhere near the other one. What they did have in common is that they are places I had not hiked previously. 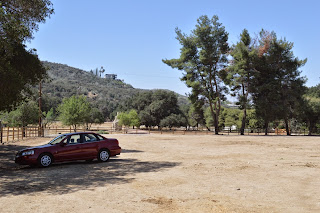 Also, up until maybe six months ago, I had never heard of either.

This Wildwood Canyon is a state park; the associated pamphlet for this park is available on-line. But it is listed as an undeveloped park on the state park system's webpage. I found it just by searching for state parks by county, and seeing this one as one of several that were within driving distance that I had not yet visited. 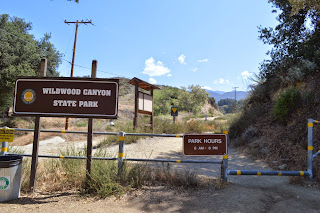 By "unde-veloped," they mean there aren't any significant facilities--some picnic tables, porta-potties, and some trails. There is no visitor center and no camping facilities here. 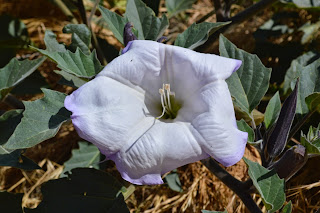 But there are trails, for both people and horses. It being almost six months since I walked, I am not 100% sure of the trails I took. 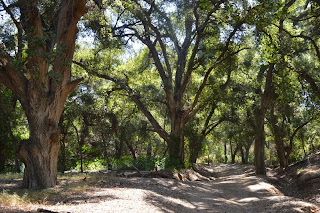 I definitely began by walking up the dirt road where the gate blocks off what appears to be the main entrance. This is the Water Canyon Trail. Behind the gate is a bulletin board-looking structure, but there were no maps or announcements or any other information on that bulletin board. So, if you plan on visiting, you might want to print out your own map before going. 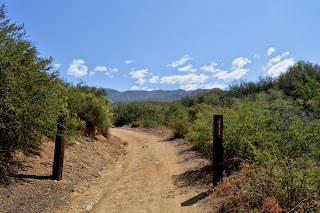 Immediat-ely after the gate is a trail that breaks to the right--the Oak Tree Loop. I'm pretty sure I turned on that trail (because it was hot, and this looked more shaded than the alternative).

I'm pretty sure I then went on to the Hi Up road, which practically collides with the Oak Tree Loop. I followed that past the upper branch of the McCullouch Loop, and reached the High Up House. (Yeah, these names are pretty lame). 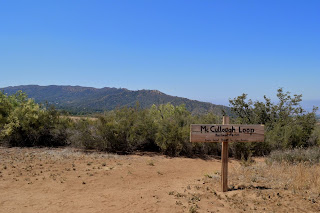 Once I got to this High Up House, I saw no obvious trail leading away from the house. I wound up backtracking, then taking the upper part of the McCullough Loop towards the mountains. I suspect I then took the Stetson Trail, because I did cross a ravine (no water, though) before beginning a pretty steep ascent. Somewhere along the way, I lost the actual trail, because I wound up going up a ridge, with no obvious actual trail heading back around like the trails on the map indicate (I don't remember if I had this map available when I was hiking or not, either). 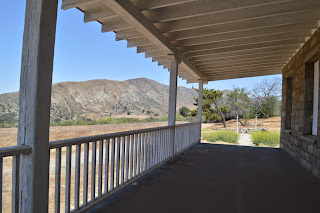 Eventually, I was forced to backtrack, back down to the ravine, then probably rejoining the lower part of the McCullough Loop, then the Oak Tree Loop. But before I got back, I wound up on a lower route, with a water spigot and what looked like horse watering areas. 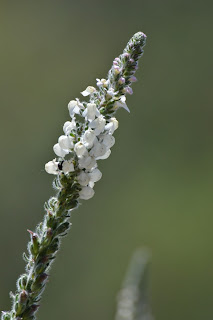 Basically, my hike makes little sense compared to where the trails are supposed to be. I assume this means I got diverted by use trails. Or perhaps the trails weren't all signed.

In any event, I got to get some walking this day, and cover some new ground. The ground itself was not intrinsically very interesting: More chaparral, which, after all, is what most of southern California at middling altitudes is going to be. 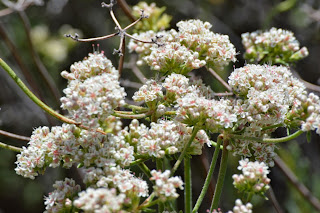 This being back in May, there were still some wild-flowers to be seen. Also, this was back when my 70-300 zoom was new, which also explains why I took so many flower pictures (most of which I didn't resize and post, obviously). 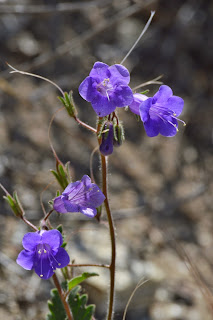 Because of what I mention above, this park doesn't strike me as one you'd normally take a long drive specifically to visit. However, if you're already in the area, either because you live here or are visiting something nearby, it's another alternative for getting some exercise. In my case, visiting here was in conjunction with a trip to Oak Glen, my favorite apple season place in southern California.

Getting to the park took a few tries, because all I had was a map of the area, but no certainty as to what (if any) facilities (including parking facilities) and access I would find. 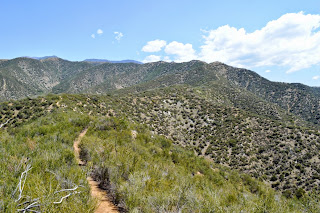 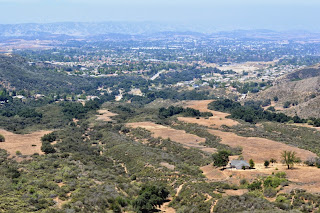 Head north about a mile and a half, passing County Line Road (which also hits the freeway). County Line Road is about half the distance to Wildwood Canyon Road. When you reach Wildwood Canyon Road, make a right. Travel about two miles on this road. When you pass a green, developed municipal park on your right, you're almost there. A large wooden sign for Wildwood Canyon State Park ought to appear on your left, very shortly after passing the municipal park. Turn left at the sign. The road will dead-end shortly. There's parking in the large area adjacent to the right side of the road here. The second picture of this post shows what the parking area looks like. It was one of my last drives in the old Saturn to a hiking destination.
Posted by SkyHiker at 12:19 PM