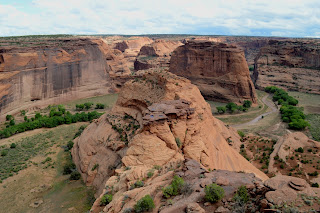 Hiked Sunday, September 28, 2014. As denoted by the letter "D" on this hike, this was the fourth of my short walks during the last weekend in September that I have collectively designated as a hike. When I started this blog, a set an arbitrary 3 mile minimum. On this trip, there were only two walks of any significant length: This one, for about 2.2 miles roundtrip, and the next hike, about one mile roundtrip, in Walnut Canyon. The other short walks were no more than 1/4 to 2/3 of a mile, total, and were basically just viewpoint walks. 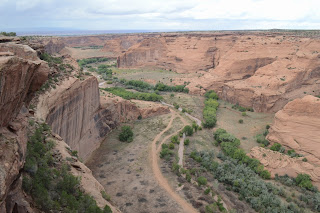 As noted on previous posts in this series, White House Trail is the only one in Canyon de Chelly National Monument where you are allowed to walk below the rim of the canyon without a Navajo guide. It starts from the South Rim. If you're not up for an actual hike, you can park at the trailhead and look down, into the canyon. You can see the White House ruins from parts of the rim here. 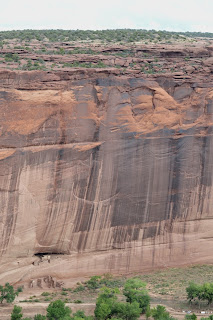 If you decide to hike, the trail starts off to the east, about 1/4 mile from the parking area. You loop off that way, then drop behind a large rock that leans over the start of the trail. This part is shaded, because you've got the rim to your south. There's not a lot of cover here, though, so if it's raining, you'll get wet.
It's a rather steep trail. Keep in mind you'll have to climb back up this way on your return, and that you're at moderate altitude. If the climb or the altitude may be issues, don't go down.

That said, it's only a bit over a mile each way, so if neither is an issue, the hike is relatively easy, unless it's extremely hot. 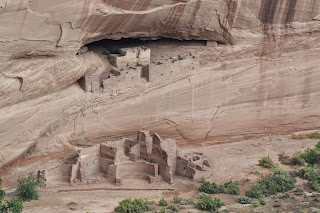 As you can see in the photo of the ruins here, the two upper "units" to this ruin are whitish in color. This the basis for the name of these ruins. 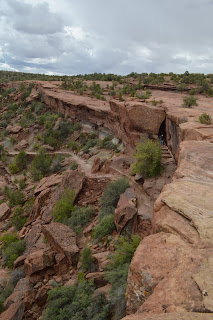 It's sandstone pretty much all the way down, and it's a very scenic hike. You also overlook some Navajo grazing and farming areas. Signs indicate not to photograph the Navajo or their dwellings, though obviously there's a distance involved. You're definitely allowed to shoot from the rim. You're not allowed to shoot near the signs. Where in between those extremes you should also not shoot is, I suppose, at your discretion. 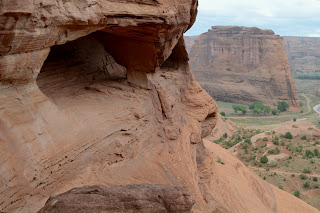 It had rained heavily the day before this hike, and showered on occasion during this hike. The ground was wet in spots and the water ran high at the bottom. Several potholes in the sandstone held water. 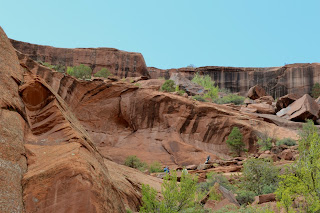 It was also late Septem-ber, yet the river bottom was green. I don't know how much is regular monsoonal rains and how much due to the season, but this location looked very verdant, as did, in fact, Walnut Canyon (the next post, probably). 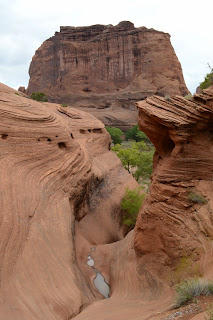 Upon arriving at the base of the ruins, I discovered that a fence kept you about forty yards away from the ruins. I also noted that there were portapotties on the other side of the creek, but at the bottom. That's non-trivial, since, otherwise, you're on your own the entire way, and there's not a lot of hope for privacy on the trail down, so you'd have had to hold it in both ways. That could encourage you to hurry your hike more than necessary. 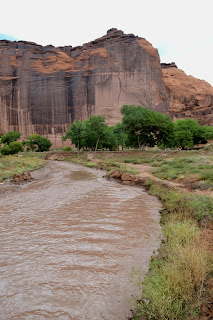 At any rate, once at the bottom, I shot the ruins from several angles. I also shot one looking up the steep cliff face that sheltered them. They certainly have ancient feel to them, and the contrast between these ancient ruins and the continued presence of Navajo in and around the valley does provide a sense of scale and place.

Yet, in comparison to some of the other nearby Ancient sites, those in Canyon de Chelly are not very approachable. The landscape in which they are set is the most impressive of the group, but the ruins themselves are not. I'm definitely glad I came here, but I'm also glad we stopped at Walnut Canyon later in the trip. 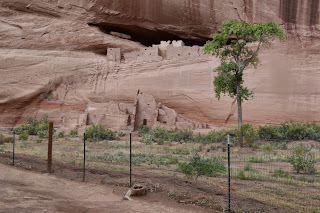 Of course, I had previously visited Waputki and Sunset Crater Volcano National Monu-ments. The old habitations there are more accessible, and would definitely be worth a visit, even after someone were to see Canyon de Chelly. 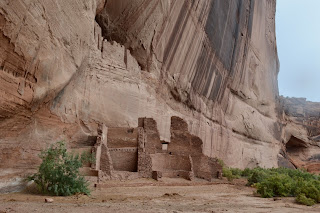 Not much else to say about this hike. Only one more significant off-trail hike to go. I also walked some around Winslow, AZ. Probably won't blog that, but their downtown/Route 66 area was surprisingly pleasant to visit. 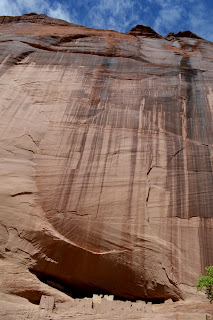 During the Winslow visit, we ate dinner at La Posada. I'd recommend a visit there, even if not to eat. It was a pretty place to visit, which is why I may yet post some pictures from that stop.

Meanwhile, after visiting Canyon de Chelly, we also detoured to Hubble Trading Post on the way back to I-40. Probably won't do a separate write-up on that one. Not sure if it's worth the visit, other than that it is an historic location--one of the first (and still functioning) trading posts on the Navajo Nation. 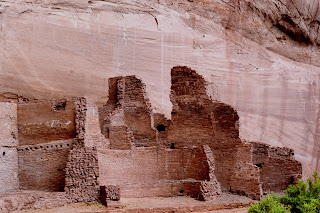 Once back at I-40, we were basically back near the Days Inn that we started the day. There's a restaurant and gas station there, too. We ate dinner at the restaurant there. I had a craving for fry bread, which this place met, nicely. Don't remember the name, but it's the only restaurant near the Days Inn, so you can't miss it.
Posted by SkyHiker at 11:08 PM