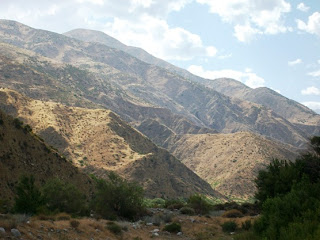 I first heard about the Whitewater Canyon Nature Preserve from a Los Angeles Times article, back in mid-April. It sounded intriguing, particularly since I regularly drove by the Whitewater exit of I-10, and the idea of, not just *water*, but a raging river, out here in the middle of the desert sounded amazing. 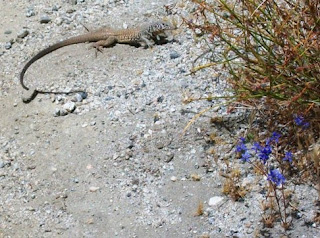 Unfortunately, I wasn't able to make it there during the main wildflower season. Well, I guess I *could* have made it, but my free time coincided with fee-free national parks events, so I went to Joshua Tree NP, instead.

On Saturday, I was heading out to the desert, again. There's a relatively bright comet in the early morning skies, Comet McNaught. Being a long-time amateur astronomer, I often head out to the Mojave Desert to observe from a dark sky location. Nearly always, I just drive out there in the afternoon, do my observing, then either head back late at night or stay overnight and return the following morning. However, given the temperate weather and my six-week long itch to visit Whitewater, we (my wife and I) managed to leave before noon on Saturday. That put me at the trailhead around 1:30pm. Since the Whitewater Preserve is open until 5pm, this was early enough to permit a moderate hike. 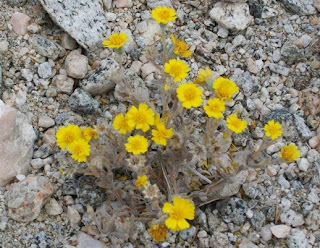 Taking the I-10 eastbound, the Whitewater exit is several miles past the Casino Morongo develop-ment. It's also just before the CA-62 exit, which would take you through the Morongo Valley and on to the towns of Yucca Valley, Joshua Tree, and 29 Palms. You take the offramp for "Whitewater," turn left at the end of the ramp (on to Tipton Road). Tipton Road takes you over the freeway. Just before you reach the big rock company parking lot, you'll come to Whitewater Canyon Road, and a sign directing to make a left here to get to the nature preserve. You'll pass numerous residences along the way. Also, on this Saturday afternoon, a number of cars were parked along the road. Apparently, this is where many of the locals go to cool off on the weekends.

The road deadends at the place marked "trout farm" on Google Maps. This building is now the ranger station/visitor center/preserve headquarters for the Whitewater Preserve. Google maps still indicates a trace where Whitewater Canyon Road used to go, but that road was removed some time ago. 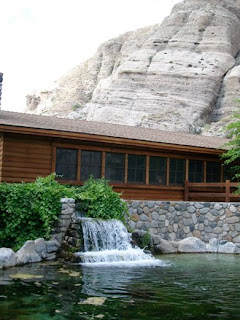 The preserve HQ is a beautiful building, set among trees and near a very imposing conglomerate cliff. The material looks similar to what you find at places like Vasquez Rocks and Devil's Punchbowl. It's compressed sedimentary material, composed of silt, clay, sand, pebbles, larger rocks, and large boulders, slowly built up over many, many years, then "cemented" together by its own weight. 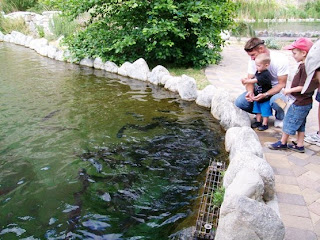 Behind the park HQ building is a series of trout ponds. I guess they provide small containers of fish food for kids, and occasionally allow catch-and-release fishing by youth education program participants. Of course, the fish are very fat and not very streamlined. It's surprising that the water stays cool enough all year for the trout to survive.

On this Saturday, however, the temperatures were unusually mild (and humid). The mostly cloudy skies kept things comfortable, so, when I finally took off on my hike, all I brought was my camera. 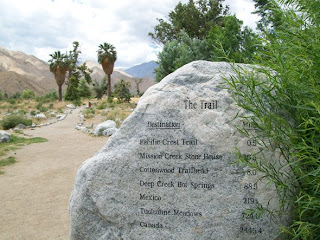 The trail I took heads north from the HQ, where a moderately-sized pool provides wading for kids. There's a large rock with mileage markers for several destinations. Turns out it's 219.1 miles to Mexico and 2445.4 miles to Canada. It's also .5 miles to the Pacific Crest Trail, which explains why those mileages are mentioned. It astonishes me that they can be that precise with the trail distances.

Just past the rock with the distances, a pair of palm trees stand on either side of the trail. When I google-mapped the area before my trip, their shadows stood out clearly on the satellite image, so they seemed like old friends there to see me off on my walk. 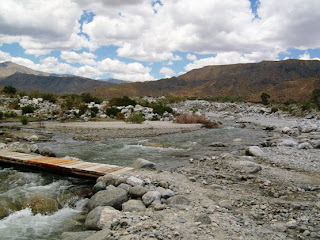 Before you get to the junction with the PCT, the trail on this day was a little mushy. It wound between seeps and wetlands. Tadpoles were swimming right near the trail. Wooden bridges crossed the water at several places, while rock hopping was necessary at others. The crumbly cliff was right up against the water in some places. When the wind blew, you could hear the cliff eroding into the canyon. 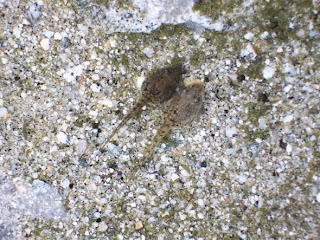 At the PCT junction, another sign provided some direction. Turning left up the hills would place us on the southbound PCT. It would also have placed me on the Canyon View Loop. However, since I wasn't sure about my leg strength, yet, I kept on the mostly level path, which was also the northbound PCT. 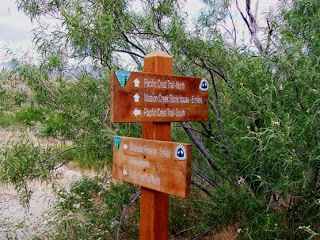 The main wildflower bloom was long past. However, there were still some small flowers blooming (both yellow and purple). Datura (looking like Devil's trumpet) was also in bloom, as were the desert willows. The willows, in fact, were pretty much covered with blossoms. 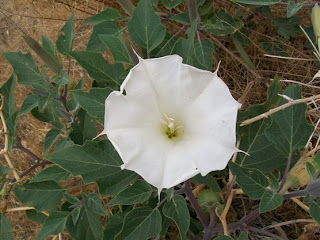 Most of this trail is spent hugging the western (or southern) wall of this canyon. The broad wash stretched out to my right, ranging anywhere from several hundred yards to over 1/2 mile wide. Desert willow and yucca were common, as was a great deal of other greenery that I can't identify, but grew thicker where the water was. In other areas, only boulders, rocks, sand, silt and logs washed down from higher altitudes provided the cover. 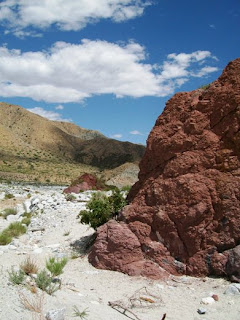 About 1.5 miles after the PCT junction, I came to Red Dome. It's not marked at the site, but it is red and it is domed and there was nothing else like it along the way. 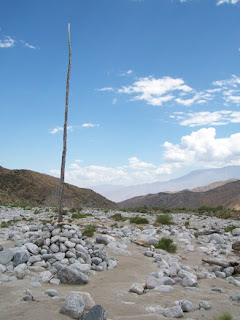 From there, the trail heads bears to the right, and crosses the wash. Intermittently, the trail is marked by signs, poles, rock piles or other indications of the way to go. However, because of shifts in the water course and the building and destruction of convenient crossing points, I suspect this part of the trail changes somewhat from year to year. Also, because it's a mostly-barren wash, it is crisscrossed with potential trail routes.

Near the middle of the wash, a tall stick, perhaps thirty feet tall, was held upright by a pile of rocks. It helped indicate the general path to the trail on the other side.

However, when I reached the water, there was no obvious crossing there. Of course, with a walking stick, one could cross the water at almost any point, provided one was willing to get wet. Also, later in the year, the water is probably much lower, and easier to cross. 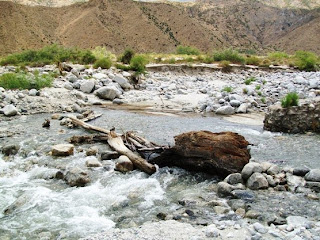 Since I was not willing to get wet, I looked both ways, and saw a possible crossing point about 100 yards to my left (upstream). When I got there, my hope was confirmed. The only iffy part was that the two thin logs (possibly yucca stalks) that spanned about ten feet of the way were on the thin side. I was not completely sure if the thinner one would bear my weight. Fortunately, it did. But I would really not expect it to survive a whole season of crossings.

Once on the other side, I looked again for the trail. Against the hills on the other side, I saw a pole with colored tape wrapped partially around it and flapping in the breeze. Getting closer, I saw the familiar shield of the PCT. From there, the trail climbed pretty steeply, with multiple switchbacks.

I checked the time as I started up the hill. It was about 2:40pm. To provide myself with a margin for error, I planned to turn around at 3pm. I wasn't sure how long this climb would be, but I definitely wanted to make it to the crest of this hill. So I walked briskly up this hill, though still stopped occasionally for pictures.

The top of the hill was tinted green. Don't know if that means copper. Another nearby cliff had pink rocks sticking out. Down below, the brown annual grasses provided some relief against the white rocks of the wash bottom. More soft browns were on the hills across the Whitewater wash. 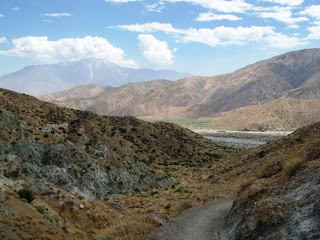 As I climbed higher, Mount San Jacinto became more prominent, off to the south, rising high above the hills around Whitewater Canyon.

Nearing the top, I startled a horned lizard, which, nonetheless, stayed within photo range. 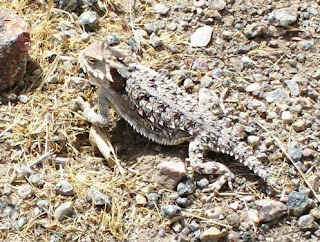 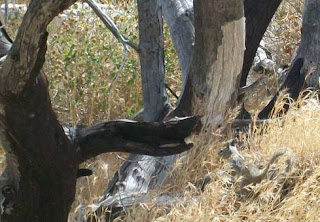 I returned the way I came. In addition to re-startling the horned lizard, I also saw a squirrel, taking cover in some tree branches. 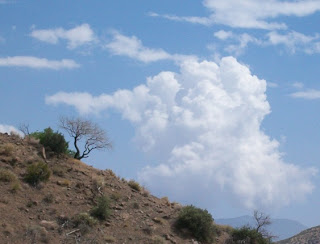 Atop the hill facing me, another dead tree provided an interesting sight. 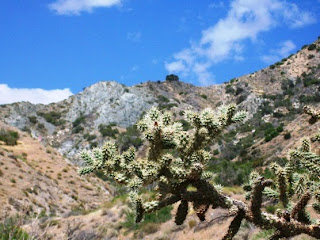 A cactus also gave some perspective to the pass I just crested.

I got back to the car around 4:15pm. That left plenty of time to continue on our way, stop for dinner in Indio, and still get to our dark-sky observing site by 7pm.

Seeing was great and I got some nice views of the late spring sky, including our temporary visitor, Comet McNaught. But that's the topic of a different blog!
Posted by SkyHiker at 7:23 AM