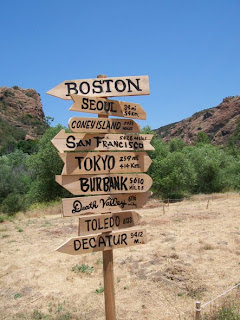 The set for the 1970s-1980s tv series, M*A*S*H, is located in Malibu Creek State Park. The route my wife and I took today more or less paralleled what seems to be the most common route, which is relatively easy and about 5.6 miles roundtrip. However, if someone wanted to get here with minimal hiking effort, there's an even shorter way. For example, when looking at this site, (which I didn't discover until after I got back), I see what looks to be a 1.5 mile round trip route from the other side.

Which ever route you take, this area is very scenic, with rolling hills, big oaks, mountain peaks, rocky outcroppings, and water features to keep you company the whole way. Porta-potties and picnic benches are also scattered along the way, usually under wonderful tree canopies to provide you with shade. 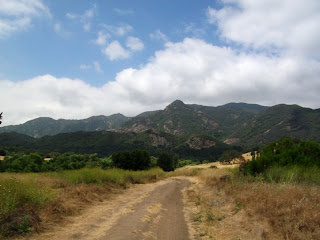 There have been several stories about this hike in the Los Angeles Times over the years. However, the most recent impetus for getting us to Malibu Creek was a segment in the tv series, Motion, which airs in Los Angeles on channel 7.2 on weekdays at 7:00p.m. (opposite Jeopardy! on channel 7.1--I often flip between the two). This is also where I got the idea for going to the Hollywood sign, way back when. To get to Malibu Creek, we headed "north" (actually, west) on the 101 freeway, west of the 134. We exited on Las Virgenes Canyon Drive, headed south a few miles, and turned right on to Mulholland Highway (there's a light there). Less than 1/4 mile west of Las Virgenes, the Grasslands trail crosses Mulholland. We parked on the north shoulder of Mulholland, just across from where the Grasslands trail heads south from Mulholland.

Had we instead continued south on Las Virgenes past Mulholland, the main entrance for Malibu Creek State Park would have been on our right. Entering and parking there would have given us access to flush toilets, drinking fountains, and a paved parking lot. It would probably also have saved us a half-mile or so of round trip walking, and removed one small altitude change between us and the destination. However, it would also have cost us $12. I generally don't mind paying a small fee to benefit a park, but I feel $12 for day use in a small park is excessive.

From Mulholland, the Grasslands trail is a dirt road that heads generally south, towards Malibu Creek. A sign at the trailhead said it was .7 miles to Crags Road. On the morning we were walking it, about four trucks hauling dirt passed us the other way. A pair of vans and several other trucks were shuttling people and equipment to some sort of commercial shoot in the park. 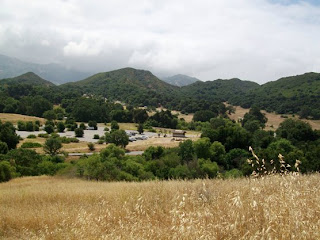 There's a slight rise (probably only about fifty feet) as you head south. The park's parking area will be to your left. As you reach a crest, there's a narrow trail that heads to your right, down across the grassy hill to Crags Road. I suspect it would knock off about 1/3 of a mile, but with a slightly steeper gradient. My wife voted to stay on the dirt road, which, after the appointed .7 miles, did hit Crags Road. From here, the sign indicated 2.1 miles to the M*A*S*H site. 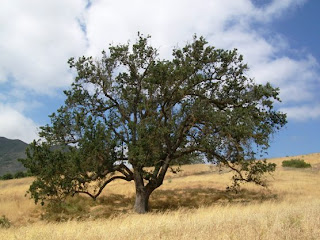 After about 1/4 of a mile, you have the choice of either crossing Malibu Creek on your left then continuing along the south bank of the water, or sticking on the "High Road," which runs above the north side of the creek. The two routes reconnect less than 1/2 mile later. Although I suspect the low route is actually a little shorter, we stuck with the high route. 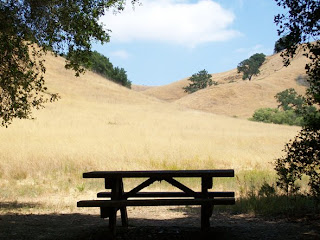 Just about where the two routes rejoin, we saw a trailer with a generator running. A sign from our trail pointed towards the trailer, with an indication that the park's visitor center was .1 mile that way. Given how short .1 mile is, I'm pretty sure the trailer was, in fact, the VC. A sign marker here also indicated it was another 1.5 miles to the M*A*S*H site. 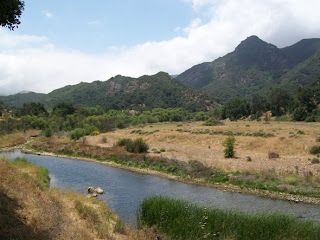 Shortly after the trail merger, Crags Road began a bit of an incline (perhaps 100 feet here). This is the most significant altitude change along this route, but it's short enough that walkers shouldn't be slowed much. However, on our return trip, we noted that several weaker mountain bikers had to dismount here and walk their bikes up to the top.

At the top, a trail with an illegible sign veers off to the left. It takes a rather direct route to Century Lake, a small, artificial lake impounded by a small dam. Warm water species of fish live in this lake, and a fisherman who passed us on our way out seemed to think the fishing was pretty good (He seemed to be a catch and release fisherman).

From Crags Road, you catch only a glimpse of the dam and the far southern end of the lake. In addition to the steep, stepped route from the top of the crest here, there's a longer and more level approach to Century Lake, down the trail another 1/8 mile or so. I suspect mountain bikers take that route. As we paralleled Malibu Creek, I noticed what looked like a trio coniferous trees (I heard they were redwoods) growing at the base of the opposite canyon wall.

As we headed west, we passed a skinny guy heading the other way. As with everyone we passed that day, I shouted my hello. I did notice that this guy looked a little haggard, and sure enough: Rather than the usual return "Hello" or "How are you doing?" or what ever, he responded with a, "Do you have any water?"

I thought that was kind of weird, since the weather was mild (low-70s or upper-60s when we met him) and it was still early afternoon. Of course, I have no idea where he started from or where he was going, but given the time and location we crossed paths, being out of water and thirsty enough to ask for water would seem to have required an extraordinary lack of preparation. 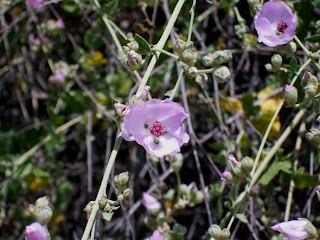 Well, what ever. We handed him our little bottle of water (it started out with .5 liter, but we had drunk about half by this time). We still had our unopened 32 oz bottle of Powerade, which I figured would be way more than we'd need for this little hike.

Not long afterward, we reached a concrete bridge that crossed over Malibu Creek. We chatted with a couple there, who happened to be looking at a nice, fold-out map of the park area. It indicated it was now .6 mile to the M*A*S*H site. 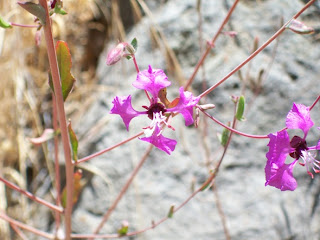 This last bit of trail ran closer to the water, and was somewhat uneven. As opposed to a dirt road that a passenger car could easily drive over, this section would be a challenge for some mountain bikers. It's not that tough for walkers, but the little rocks that pop out of the ground can turn or stop the tire of the unwary.

Finally, as we reached a sign for a "Lost Cabin trail," we could see the replica of the sign with the distances from Korea to Toledo, Seoul, Death Valley, etc.

There were about five benches here, the rusted remnants of an ambulance and a jeep, and sticks with a string outlining where the set tents were located. As is often the case with Hollywood, the real thing covered much less space than you thought they would. Here's a shot from near the "helipad," looking down on the camp: 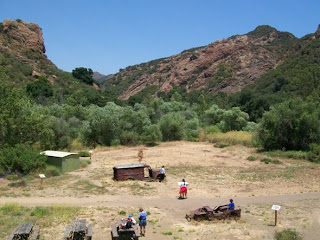 There were four signs at various places on the old set. Each photo had some information and a still from the show or from production. In each, you could look at the picture, then look above at the hills and mountains that were in the backgrounds of those pictures. 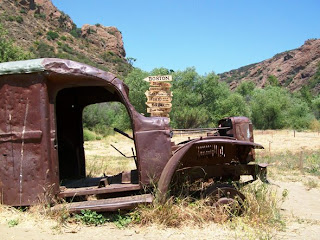 A small shed was also nearby, with additional pictures and show-related trivia.

We returned the way we came. Because I was able to coax my wife to join me on this walk, I got to enjoy her company, but the walk was also a lot slower than normal. By the time we got back, I was pretty thirsty and she was pretty sore. Still, we had some relaxation time together, and got to laugh about the things we saw along the way.
Posted by SkyHiker at 9:45 PM