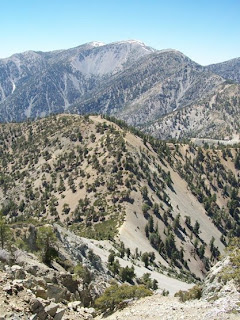 I initially planned to do this hike last week, but my knee injury and assorted other demands kept me off the trail. Finally dragged myself on this hike yesterday. And I do mean dragged. Although the majority of this hike as a simple retrace of Hike 61--Timber Mountain the additional 4 miles seemed to make this one twice as hard.

Most of this hike is at 7,000 feet and above, so it's not surprising that this can be hard. Gaining and losing altitude in the thin air is very draining. And, as feared, the descent off of Timber Peak, down to a saddle, then back up to Telegraph Peak was a killer. Although I started the day thinking I might go on to Thunder Mountain, by the time I got to Telegraph Peak, that feeling was long gone. In addition to being beat, the view down from Telegrpah Peak on to Thunder Mountain made it seem like going down to Thunder would be anticlimactic.

The picture at the top of this post shows the view of Mount Baldy from Telegraph Peak. The flat area right of center is Thunder Mountain, which doesn't seem to be a mountain at all. Instead, it's a cleared area with a paved, private road to the top, designed to support the Baldy ski resort. I may walk up that paved road later in the week. 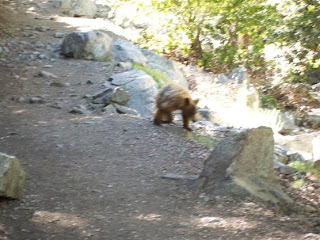 In the meantime, Hike 67 began around 10am. Within five minutes, I came across a small bear cub. All I have to show for that is a very fuzzy picture, which sort of reminds me of the sort we used to see when ever Big Foot was mentioned. 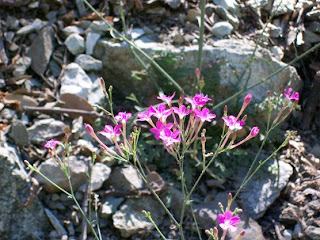 Although this cub was the size of a large dog, I was nervous. For one, there's always the fear of winding up between a mother bear and her cub. For two, this bear didn't seem too frightened of me. Living where he was, I guess he saw lots of people every day. I wouldn't be surprised if some people tossed him food. That's a recipe for disaster, for both bear and hiker. 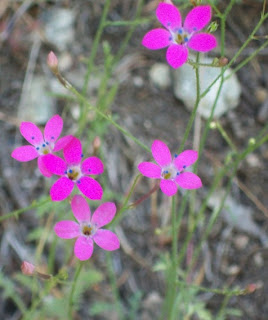 After leaving the scrawny little bear behind, I snapped pictures of the late spring flowers. I identified these little purple ones as "splendid gilia." What a name, huh? 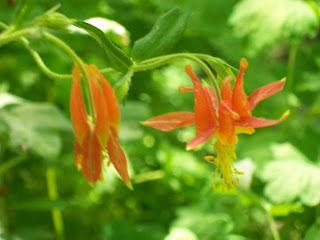 However, I could not find a positive i.d. for these orange and yellow ones. They look a little like Humboldt lily, but I did not notice if their petals had all of the markings of the Humboldt lily. 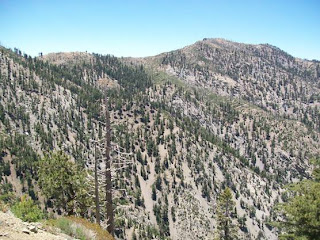 The most dramatic change since the May 21 hike to Timber Mountain was that pretty much all of the snow has melted. Today, I passed only one tiny patch on the way to Telegraph. A few small patches remained on Baldy, while, on the tall peaks to the south, snow was seen only in a few deep cracks. Although the ranger at the Mt Baldy Village station said snow would be a factor on the way to Ontario or Cucamonga Peaks, I really think those routes would be almost entirely snow free. If not already clear, it can't be more than a week more.

Baldy may take two weeks to be essentially entirely clear of snow, but I suspect one could make it to the top without crampons or ice axes, and without taking extraordinary risks. Nonetheless, I'll give it another week or two. :D 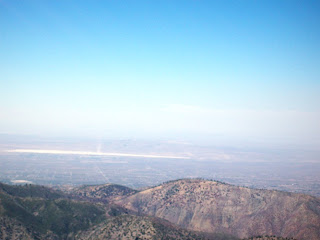 At the peak, the wind was howling to the north, meaning there must be low pressure out in the desert. I saw one very large dust devil, twirling on a dry lake bed to the north. 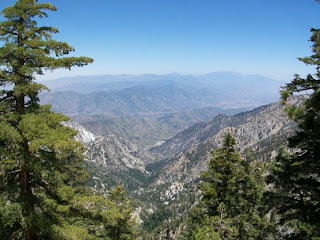 I-15 cut across the north, and the view down the Lytle Creek drainage looked pretty clear. 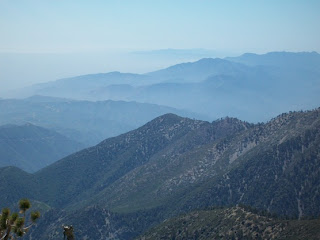 To the south, the mountains between here and Mt. Wilson and even beyond gave a nice "Great Smokey Mountains" look to that view.
Posted by SkyHiker at 2:22 PM