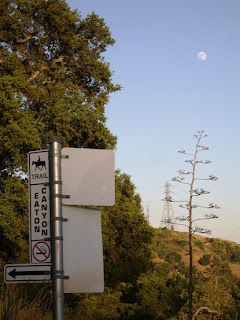 Since I knew I wasn't going to be hiking tomorrow, I wanted to get something in today. My initial plan was to try something big, but I got lazy and I was a little worried about my pinky toe. So I ended up waiting until "afternoon," when I thought it would be cooler. Figured on something shorter and easier. And, because it's the closest San Gabriel Mountains trailhead to my home, it was there that I went, again.

Even though I didn't leave home until about 4pm, my car thermometer said it was 86. And as I hiked up the Toll Road, I believed it. Hot, and sweaty. And buggy. Not as buggy as Sawpit Canyon was earlier in the week, but close. I think there are more flowers and more moisture in Sawpit Canyon, which probably explains the bugs. But I still got bit several times today.

From the Eaton Canyon Nature Center parking lot, I walked up the wash, crossed at the sign, continued up the east side of the wash, then took the steep "shortcut" to the toll road. About 2/3 of the way up that inclined, I started a large and angry rattlesnake. Couldn't manage any pictures, but, boy, did he shake his rattle! 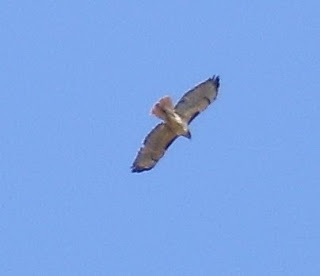 And he had good cause. About a half-hour later, a large shadow passed over me. A raptor (probably a redtailed hawk, since I saw one on the way back down) swooped over me, wings sllightly tucked. A large snake dangled from his talons. Given the size of these birds, the snake was probably a four-footer, easy. The bird swooped down over a hill and into a canyon. Didn't see it when I got to where I could see in there, but I assume he/she either fed it to its young or found a convenient and protected tree branch to eat an early dinner. No way to know if that was the same rattle snake I saw earlier, but it was about the right size.

Didn't get a picture of the hawk with the snake, but I did get a descent shot of what was probably the same bird, just an hour or so later. 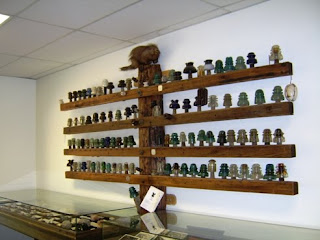 When I got to Henninger Flat, I went into the little museum up there. Mainly, that was to get a break from the buzzing insects that were driving me nuts. I took a picture of the collection of insulators because someone asked about them the last time I mentioned being up there. 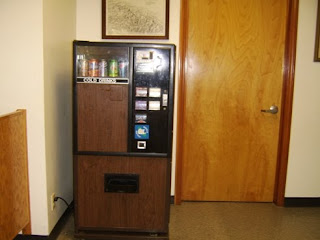 I also noticed a soda machine, and noted the price (75 cents a can). I think maybe the next summer day I'm heading up this way, I'll have to carry some quarters. :D

I returned down the hill the "long" way, and took the 1-mile detour to see Eaton Canyon Falls. The water was way down from my last trip up here, and way, WAY down from back in March. It is once againa very easy walk. Nothing longer than a medium stride to get from one rock to the next as you cross the river. 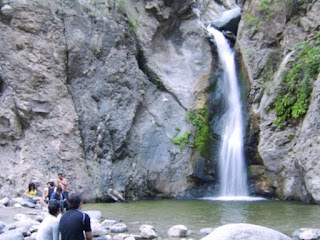 By the time I got to the waterfall, the canyon had long since become shadowed. Exposures were kind of long. On the positive side, that means nicely blurred water. On the negative side, it means there's enough shake that the rest of the picture is very soft, too. But at snapshot dimensions, the latter blur is not too objectionable.

Total mileage for the day was about six miles. Not a bad way to spend an afternoon.
Posted by SkyHiker at 10:59 PM