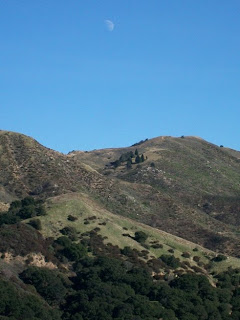 The first 100 hikes of the year didn't exactly end with a bang. However, I decided I was not up for the Mt. Baldy trail, and I got too slow of a start to do Mt. Wilson. Besides, I've been up there about a half-dozen times this year, anyway.

Instead, I headed to someplace I had been to only once before: Wilson Canyon. 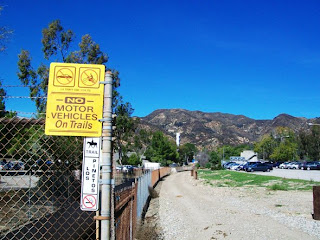 It's a bit of a drive: 210 freeway west, nearly to the 5. Exit Roxford Street, go north, and loop around to get on eastbound Olive View. There are numerous access points from near here into the San Gabriel Mountains. I chose the one just east of Olive View UCLA Medical Center. There's a signed access point to the Los Pinetos Trail that runs parallel to a drainage ditch (probably Wilson Creek), between Lots F and G. 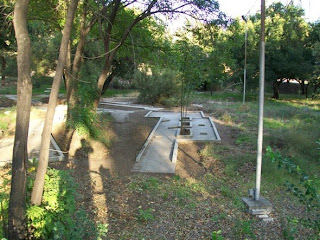 Head north about 2000 feet. You'll pass several bridges that connect the lot on your right to the Medical Center, on your left. You'll also pass a helicopter landing area for the hospital (with a sign that says to wait until aircraft have cleared the area before proceeding) on your left, and the remnants of a miniature golf course on your right. After crossing Saranac Lane (gated just to your right), your path continues a short bit further north. Lot J is to your left. A dirt flood control structure is in front of you. 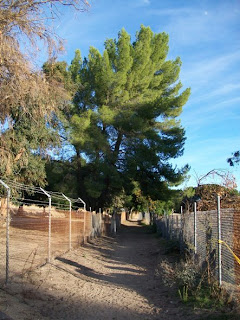 After passing Lot J, you then turn west. Chain link fences are on either side.

At last, your path leads you away from parking lots. You're then in a ravine, with burn-scarred oaks all around. Most are still growing. As your path takes you a bit higher, you leave the moisture of the ravine bottom and the oaks give way to chaparral. A couple of water tanks are on the hill to your left.

Head to the northwest. Several alternate trails will present themselves, and I'm pretty sure most wind up the same place. Your goal is simply to keep heading northwest until you run into a well-defined dirt road. This is Wilson Canyon Road, which is also known as Los Pinetos Trail.

As I said earlier, there are numerous alternative access points into the forest. If you keep heading north and west from anywhere between Olive View Medical Center and Hill Crest Avenue (which is a bit north of Olive View and west of the Medical Center), you'll eventually run into Wilson Canyon Road. If you're on a "major" trail, there'll probably be a sign announcing Los Pinetos Trail when you hit the road.

Although Wilson Canyon Road initially runs mostly northerly, it soon traces a looping path to the west. For about 1/2 mile, you're actually overlooking the next drainage over from Wilson Canyon. What looks like a bunch of old Army barracks are down below.

Today was extremely blustery as I started, and continued blowing hard until just before I reached the saddle. That meant great views the entire way up.

At the Saddle, there's a pit toilet and places to tie up your horses (I saw more people on horseback today than I did on mountain bikes). There's also two picnic tables on a grassy rise just west of the toilet. If it's not too hot and not too windy, it would be a nice place to stop and have a bite to eat and something to drink.

It's between 4.5 and 5.0 miles from Olive View to the Saddle (there's a sign at the saddle saying there's a locked gate 5 miles back down, so I'm extrapolating). Altitude gain is about 1,400 feet (My rough trail map has a 1,600 foot contour line above the trailhead, and a 3,000 foot contour line near the saddle). 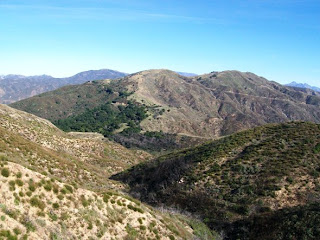 From the saddle, there are several hiking options. The most obvious one (which I did the last time I was here), is to head straight north, across the dirt road (Santa Clara Road) that runs along the saddle). That sends you down Placerita Canyon Trail, which is also a continuation of the Los Pinetos Trail. After about three miles, you're in the Walker Ranch area of Placerita Canyon county park. Last time, after going down there, I also took the short trail from there up a side canyon to small waterfall.

Rather than going down Placerita Canyon trail again, I initially intended to head west a bit on Santa Clara Road to take the Mazanita Trail down into the western portion of Placerita Canyon. However, after traveling a short distance on Santa Clara Road, I was presented with another dirt road, heading up and towards the southwest. This road (forking left off of Santa Clara Road, and labled 3N64 at the first fork, and 3N64A when it forked again, towards the towers) led, after less than a mile, to a small cluster of microwave towers. 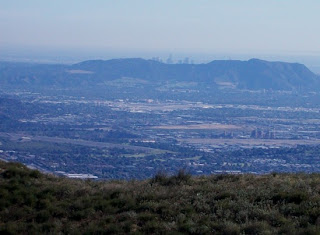 More outstanding views here. Far to the southeast, I had earlier (when I was further down) saw what I figured to be the Hollywood Hills, with an antenna on top of what I thought to be Mt. Lee (with the Hollywood sign on the opposite side). From near the microwave towers, I was higher, and there as a conveniently aligned notch in the hills, between which I could see the skyscrapers of Downtown Los Angeles, nearly 30 miles away.

Somewhat to the right and closer was Bob Hope Airport. The Santa Monica Mountains were further to the right. I'm pretty sure I was also looking clear over Palos Verdes and to Santa Catalina Island. I could definitely see the Santa Ana Mountains, way off to the southeast, and, of course, the San Gabriel Mountains extended to the east. 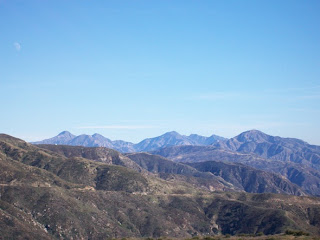 After shooting dozens of shots and soaking in the view, I started heading back down to Santa Clara Road, where I intended to look for the Mazanita Trail. On the way down, I stopped for more pictures. A gibbous moon was rising over the hills. It was sublime.

Upon reaching Santa Clara Road, it only took a few hundred yards of additional westward walking to reach what I assume to be the Mazanita Trail. No manzanitas to be seen, however. This area (and an uncomfortably large portion of what could be seen from up here) was burned over the past few years. 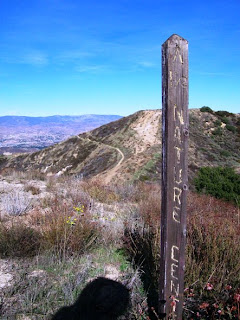 From the road, I saw what looked like it might be a sign further down on the trail, so I walked down a few hundred yards. It was a sign. Or, at least, a thick and tall wooden stake, with writing on it. It claimed a nature center was 1 1/2 miles down this trail. Funny. It looks longer than that on the map.

By now it was after 2pm and I wasn't sure if I had time to go down there and get back to the car before dark. So I returned east on Santa Clara Drive, then headed down Wilson Canyon Road. 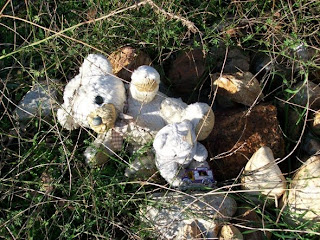 On the way back, I found the same wide spot in the trail where I saw what looked to be a memorial of some kind. The stuffed bear was still there, albeit faded and fallen over. Another, smaller animal had been added. The glass candle holder was still there. 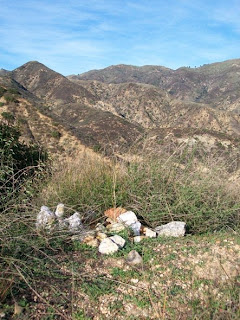 But the rocks were more askew and the plants had somewhat overgrown the memorial. I still wonder what this was all about.
Posted by SkyHiker at 9:12 PM