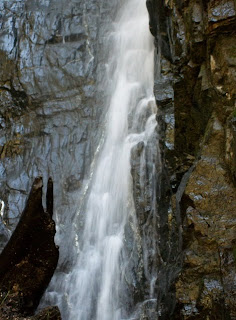 Hiked Thursday, March 10. Bailey Canyon Park is located in Sierra Madre. From the 210 Freeway, you can take Baldwin Avenue north (there's an odd little jig you'll have to take off of Foothill to get on Baldwin north of the 210). Pass through their downtown, past a large church on your right, and drive carefully along this residential street. After you pass Mira Monte (which sounds an awful lot like the "Indian" woman that Kirk runs into in "The Paradise Syndrome"!), the next street should be Carter. Turn left on Carter. 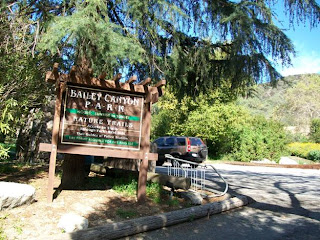 Shortly after you pass Lima, Carter becomes very narrow. You should see an open chain-link fence of a gate on your right. There's a small parking lot there. Many people simply choose to park on nearby Grove Street. That's a good idea if you're not sure if you'll get back by dusk, because you don't want to get your car locked behind the gate (though you might need to climb over a fence to get to your car when you get back!). 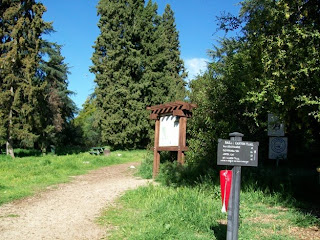 At the west side of the parking lot (the left side, if you're facing into the lot from the gate), there's a flush toilet and a signed trail head. The large map does not include mileages, however, so it's only useful as a very general guide. The large sign at the parking lot entry says a trail map is available at the police station, so I suppose one of these days I should go there and get one of these maps. According to Google, the police station is on W. Sierra Madre Blvd, across the street from Sierra Madre Park. I must have driven right past there on the way home, but wasn't looking for the police department, at the time.

Several picnic tables are visible as you make your way along this trail. After about 100 yards, it reaches a fence and a pass-through turnstile. After passing through the turnstile, you're on a narrow paved road that goes up and along a large debris basin. For the first time, I saw some water down there.

Some sort of religious retreat (labeled "Passionist Community" and "Mater Dolorosa Retreat Center on Google Maps) is on your left. I have never walked by this place without the "Closed for Private Retreat" sign being up on a gate here. 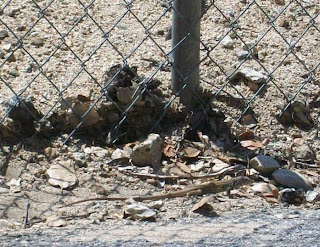 Last May, as I walked this section, I came across the largest lizard I have ever seen in "the wild" of southern California. It seemed to me to be well over 12 inches in length, and it was probably a whiptail. Here's a picture. I suppose I could go back there and measure how wide the chain links in that fence are to estimate a length.

There's also a handicapped parking spot up here. I'm not entirely clear on how someone drives a car here, however. 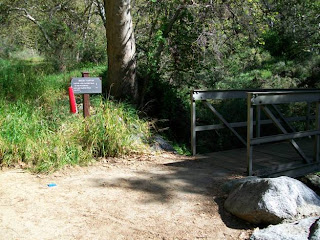 A few hundred yards further, there's a foot bridge. Staying on the left side of this gully leads you to both Bailey Canyon Falls and the trail up to Bailey Peak. Crossing the bridge takes you to the "Live Oak Nature Trail." 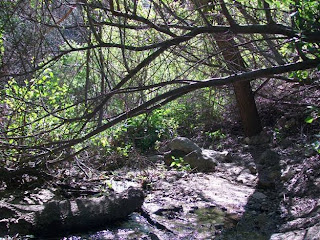 Upon reaching the bridge, I saw more water. And so, I shifted from planning to hike to Bailey Peak to seeing if maybe there might actually be some water coming down the waterfall today. On my first visit to this "waterfall," all I found was a moist crease along a wall. On later trips, I never saw anything to suggest actual water might be found there. But today, as I continued up Bailey Canyon, the trickle of water along (and, occasionally, over) the trail told me that the waterfall might actually be "on" today. 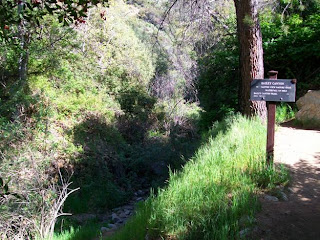 And, indeed, when I came to the next signed junction, the water still flowed over the trail that led to Bailey Falls. So up I went. 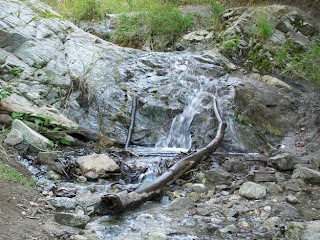 This trail is not maintained very well, and it took some ducking and careful stepping to keep my feet mostly dry. But as I climbed higher, and the water kept flowing, it was encouraging.

Finally, I reached the end of the box canyon, and beheld a cute little sliver of water. At the base of the falls was an large and wet log. Without actually laying on the log, I guestimated that it was about 2 1/2 feet longer than I was, which makes it about eight feet long. I visualized about three "logs" would be needed to reach from the small pool at the base of the wall to the small notch at the top, so my estimate says the falls is between 20 and 25 feet in height. 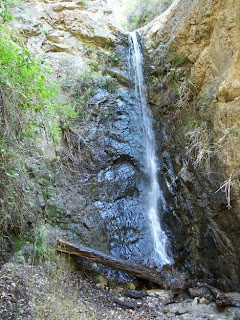 The water flow over the lip was probably less than 1/2 of a cubic foot per second, but it splays rather nicely near the base of the falls. Photographed from an angle, it creates the illusion of a lot more water than is actually there. That's the picture I have at the top of this post.

At this point, I turned around, and thought I might head over to Monrovia Canyon. If Bailey Canyon actually had water, then perhaps Monrovia Falls, which also tends to have a pretty slow flow, might be running higher, as well. However, as I passed the sign for the nature trail, it occurred to me that I had never checked that trail out before, despite the 4 or so times I had walked past them.

Unlike the "Canyon View Nature Trail" that runs to Bailey Canyon (which has numbered posts in the ground, but no accompanying description), the Live Oak Nature Trail actually has little metal plaques with information on the object it is supposed to be displaying. Following the trail in order seems almost impossible, however. There is a very well-defined trail that does NOT hit the plaques in numerical sequence. For example, it seems like you need to backtrack after going past markers #1 and #2 to get to back to the trail that will take you into a nice "tent" under oak boughs. 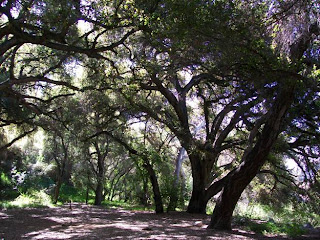 Of course, it's worth the backtrack. There's a swing attached to one of the branches, high above.

After some careful searching, i found #3, and continued along easily to #8. Then it took some searching again to get to #9, #10 and #11 (it was NOT by following the most obvious trail!).

Nonetheless, with enough care and some backtracking, you'll find all 14. Just be careful, because there's a lot of poison oak in the area, sometimes right against the trail. And not all of it is so helpfully signed. 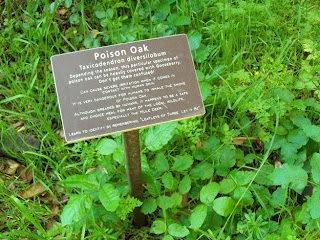 Besides the poison oak, there are signs for coast oak, California Laurel, gooseberry, coastal sage, and assorted other common plants. However, some plants have been overgrown with crawling vines, making proper identification most difficult.

Short video below. It starts with the eight-foot log, then pans up. You can see that the water looks very picturesque near the bottom of the falls.


By the time I finished the "Live Oak Nature Trail," with all the necessary detours and backtracking, and got back to the car, it was about 1:20 after I left. But given how much time I spent snapping pictures, I seriously doubt I actually covered three miles. Still, I was no longer feeling like taking a 4 mile roundtrip to Monrovia Falls, so I called it a day. I'm numbering this hike #2011.014A, because it wasn't long enough to count as an "actual" hike.
Posted by SkyHiker at 12:00 PM