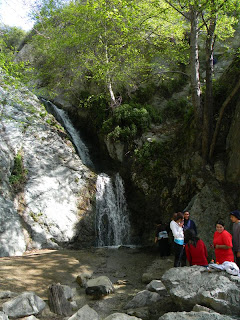 Hiked Friday, March 18. After a somewhat frustrating week of not being able to hike, I finally had some free time today. I decided to try a hike I attempted last year.

My trail head was near the corner of Mountain and Foothill. From the 210 freeway, take Mountain north about 1.5 miles. When you reach a stop sign, turn right, into what seems to be a condominium driveway. Head a few hundred yards, past the condos, and there's a small parking area where this "driveway" passes over Sawpit Wash. 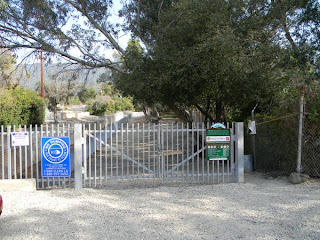 To the south, there's also access to Sawpit Wash multi-use trail from Wildrose Avenue and from Lemon Avenue (in both cases, from just east of Mountain Avenue). To the north, there's access from Greystone Avenue and from Norembega Drive. However, I think the access point near Foothill and Mountain is the only one with off-street parking. 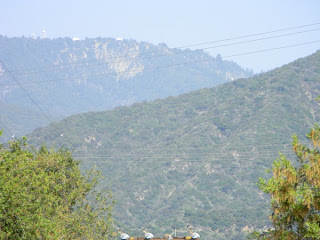 The trail from near Foothill is not scenic, but it does get you off of road. A concrete drainage ditch that is Sawpit Wash is on your left as you start out. There are occasional fields to the right, where I have seen deer in the past. But, mostly, you're just looking at walls or the back of houses. There was a decent view up to Mount Wilson along the way, however.

At Greystone, you need to cross at street level. The trail also switches to the west side of Sawpit Wash. 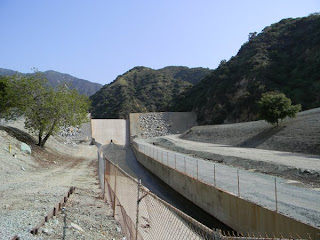 After about 3/4 of a mile, you start ascending a paved road, with an earthen dam (with a concrete spillway at the top and a run-of-the-river drain at the bottom). This is where the trail joins North Canyon Blvd. There's a black metal gate that I assume swings across N. Canyon Road some time after the park closes. 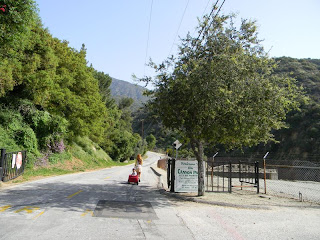 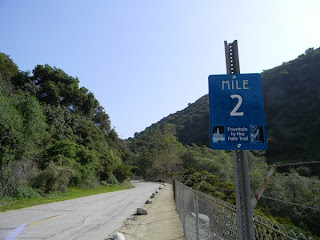 Once you pass the gate mentioned above, you have about 1/4 mile of walking along the shoulder of the road, with nothing between you and traffic but air and the occasional stone on the ground. When I first walked this path, just over a year ago, there used to be a line of small boulders and large stones delineating the shoulder, but people have either been swiping or tossing those stones into the wash. Today, there were sections of road with only about one stone every twenty yards. 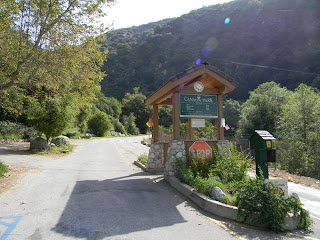 Next up is a parking lot, just outside the gate of Monrovia Canyon Park. There's a single flush restroom here, and a kiosk that I have never seen occupied. There's also an honor-system "iron ranger" to deposit your entry fee (if you're driving): $5 a day, or $50 for an annual pass.

The fee seems excessive, considering that an annual pass for Joshua Tree National Park or an annual Adventure Pass for the four regional national forests (Los Padres, Cleveland, Angeles, and San Bernardino) is just $30. I think it just serves to encourage more people to park further down on Canyon Drive or otherwise access the park by walking in rather than driving in. Maybe that's their intent? 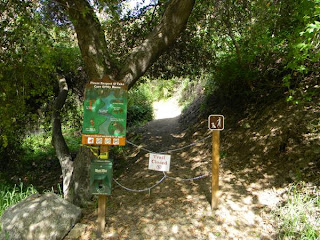 "Normally," when you reach this parking area, there's the trail that runs 1.5 miles from here to Monrovia Falls, and that's the path I intended to take. However, as was the case the last time I came up this way, there was a chain across that trail. Hrumph.

Instead, I took the short "bypass" trail, which goes all of about 150 yards, parallel to the canyon road, before leading you right back to the road. 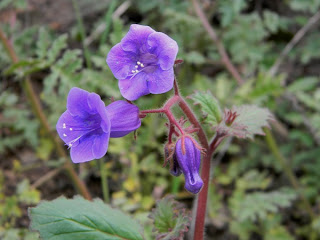 From there, most exercise hikers seem to take the right road, which goes up to the east of Sawpit Canyon Dam, then on as far as they wish. Car traffic that way is minimal.

However, because I wanted to see the waterfall, I took the left road. Turns out there's not much car traffic going that way, either.

After maybe 200 yards, there's a cabin on the left. Another 100 yards or so past that is an access point down to river. Had I continued on the road, I would have had a short but steep 150 yards or so to the nature center. 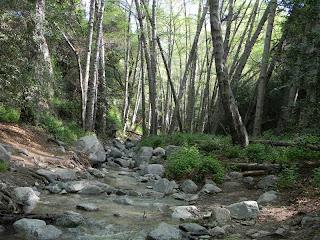 Instead, walking down towards and along the river for a few hundred yards, I saw where this path joined up with the "regular" trail. The regular trail takes a much more scenic and round-about path to get here. So instead of having 1.5 miles from the lower parking lot to the waterfall, I suspect the distance from the lower lot to the falls is now only about a mile.

On the trail, numbered nature path signs begin appearing, although I have never seen the guide for this trail (there are little plastic pockets on signs indicating where these guides ought to be available at the trail heads, but they've always been empty.

After about 1/4 mile, another trail comes in from the right. That's the path that would take you to the nature center (which was closed today--I don't know their hours). From this junction, it's only a little over 1/2 mile to the falls. 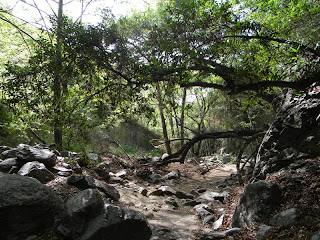 Plenty of old oaks line this path, with many partially fallen over and with thick branches making parts of the trail low-clearance. Sycamore were also common in the canyon, as well as willow and alder. The alder leaves were just recently sprouted, and were still more yellow than green.

I only spent a moment or two at the falls (pictured at the top of this post). There were about eight people when I got there, so it wasn't exactly an exercise in solitude. Also, not far behind me was a class of maybe 25 third or fourth graders that were making the hike with their teachers. Cool for them, but, I wanted to start heading back before I got surrounded by munchins, although the school kids would have been better company than the trio of teenagers that were hollering and chucking rocks into the water all along the creek. 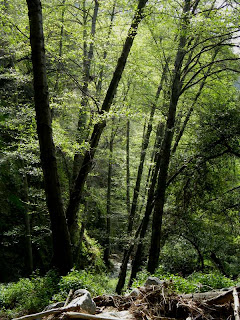 On my return trip, I took the spur trail to the nature center, where I discovered it was closed. Then I walked down the road the rest of the way, all the back to the entry station. From there, it was along the shoulder, then down to the Sawpit Canyon trail, then on, to my car. Walking quickly and taking no pictures on this return segment, it took me 35-40 minutes from the nature center parking lot to my car. This was slightly shorter than my trip in, since I walked more of the trail along the creek. Also, the road is pretty steep near the top, so I was making good time. So, all in all, I'm figuring between 4 and 4.5 miles roundtrip. Had I been able to walk the whole waterfall trail instead of just the upper part, that would probably have added a mile.

I've got 22 seconds of supposedly-HD video of the waterfall below.

Last Comment: I'm still just getting used to my Nikon camera. As the Mt. Wilson picture illustrates, it seems to give a soft focus when you go to full optical zoom. That kind of defeats the purpose of having a large zoom ability.
Posted by SkyHiker at 3:05 PM