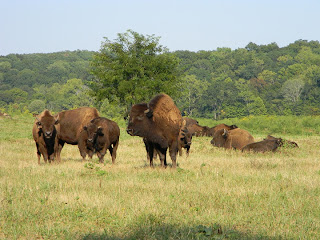 Hiked Tuesday, September 13. Today's hike would be a pretty short three miles, and probably only if I add the mileage walking to my office and back. Twice.

Bison? In Kentucky? Yeah, I was a little surprised when I first heard of them. I was also surprised to discover that bison were historically resident in the tall grass prairie of Kentucky, and much of the land east of the Mississippi. However, they were eradicated by 1820. Elk were also eradicated around that time. While elk have been reintroduced to some of their native range, there are no free ranging bison (that I know of) east of the Mississippi.

There's allegedly a foot and horse trail that works its way around the South Bison Range. This is about 12 miles south of the Golden Pond Visitor Center, and 13 miles south of the Elk and Bison Preserve. From US 68/KY 80, head south on the Trace and park near the large sign for the preserve. 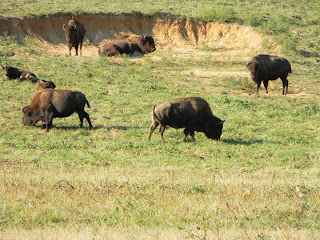 There's a steel fence that surrounds the South Range, although I suspect a motivated bison could break through. It's just that they have no real incentive to break through, since there's plenty of grass and water on their side of the fence.

Nonetheless, as I reached the far side of my walk, I kept a cautious eye on them in case one of them decided to test the tensile strength of the fence. 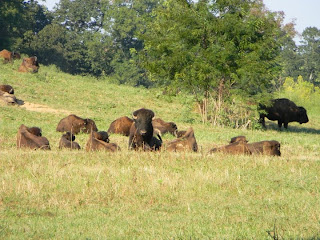 This being late summer, the bison have a ragged look to them. From some angles, you can pretend they're free-ranging bison. From others, the fence is obvious.

The trail hasn't been mowed recently, so it's full of thorny growth and three-leaved plants (which probably aren't poison ivy because these things had thorns), but I didn't want to take a chance. 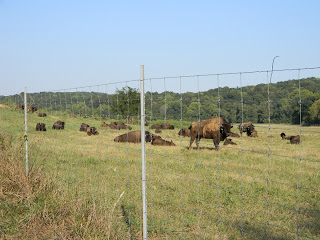 I intended to walk entirely around the range, but as I approached the final stretch, the growth became too thick to navigate. The only clear path would have put me right on the fence, and I didn't want to draw that much attention from the bison. The photo here gives you an idea of how close I was going to have to get to them.

LBL Road #205 runs just south of the range, and I walked a short distance on this road before starting the trail. The detour for the North-South trail also runs on this road, so I may drive this area again soon to walk another segment of the North-South Trail, or I may just try picking it up from a more southerly location.
Posted by SkyHiker at 12:46 PM