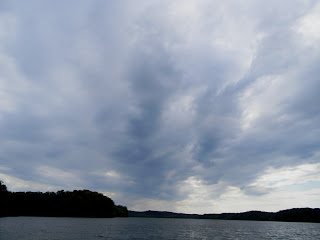 Hiked Tuesday, September 27. Had to fit a hike in today because I'm going to be busy the rest of the week. That may put a bit of a dent in my march to 100 hikes.

Today's hike was from Energy Lake. I was actually planning to go to the north end of the North-South trail, then got distracted by roadside flowers and thought about maybe hiking Hematite Lake. Didn't shift my attention to Energy Lake until I reached the turn.

From KY80/US68, I exited on the Trace and headed north. I turned right on Mulberry Flat Road (LBL Road #135), which is the first road that would take you to the Nature Station). However, instead of turning left at Road #134 and heading to the Nature Station, I turned right, towards Energy Lake. Just after crossing the narrow causeway that is Energy Dam, I parked in the lot on the left. There's a portapotty there.

From the lot, there's a mowed pathway south, to the Energy Lake trail head. Small grasshoppers were flittering all over the place as I walked towards the trail. 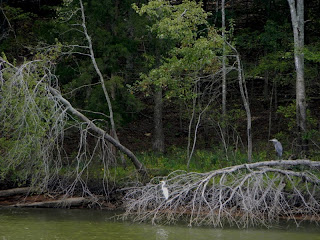 A large egret and a grey heron were sitting on a downed tree. Several turkey vultures were cruising the tree line across the lake.

When I reached the trail, the clearer path (which had blue blazes nailed to trees facing me) was slightly to the left. A fainter path headed to the right. Turns out that would be my return route.

This path begins by paralleling Crooked Creek Bay, before turning inland and crossing a 1/2 mile wide peninsula. When it approached the water on the other side, it turned sharply to the right, climbing for a while, then descending. At the bottom, it crossed a paved road.

This confused me, because the recreation map I have for LBL shows me crossing only a gravel road. On the other hand, it also shows the widened KY80/US68 route as "under construction." When I got back to my car, I drove south on LBL #134 and confirmed that it is now paved, all the way south to KY80/US68. This would have shortened the drive to this trailhead by 3-4 miles, I think. 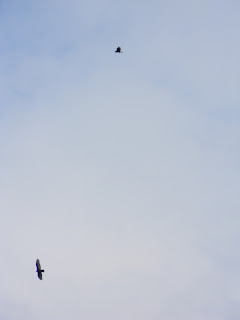 I had to walk left (southeast) along this road for a few dozen feet before seeing the continuation of my trail, on the other side. After briefly paralleling the road back towards the northwest, the trail then climbed to the left for a while, before eventually joining a dirt road for a hundred feet or so. I kept looking for trail blazes, and eventually saw some blue ones along a trail that split off to the right. More sharply to the right, I saw yellow blazes for what I later learned was the shorter (Yellow) loop trail from Energy Lake Campground. That's why I say I hiked the "Blue" Energy Lake campground. My entire path was marked by regular appearances of blue metal blazes on trees.

After another mile or so of walking, I eventually found myself heading up a hill, towards a campground. That's where the blazes led, so that's where I went.

Upon reaching the top of the climb, I was on a paved road that was part of Energy Lake Campground. The blue blazes were no where to be found. Fortunately, a camper at the top pointed me down the road (to the right). Extremely intermittent blue blazes indicated the trail went along the right shoulder of this road. I just walked on the road.

I eventually passed a boat house and the entrance station for the campground. When this road finally intersected with LBL Road #134, I could see blue blazes inviting me to rejoin the trail, on the other (east) side of #134. After a short time, I was back at my entry point.

If I'm reading this map correctly (which I didn't discover until after I got home!), I walked about 5 2/3 miles, including the short walk from the parking lot to the trail. Blue blazes marked my entire route, and were almost always located right about when you started questioning if you were still on the right track. At a few places, down trees required short detours.

Surprisingly tired for such a modest walk. It was a little bit hillier than most walks in LBL, but it's still not anything strenuous. 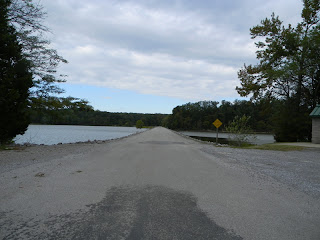 Both here and at Honker Lake, I wasn't sure which side of the dam was retaining water. Was the dam supposed to keep the arms from flooding, or did the dams impound water in the arms to keep them deep enough for these protected coves to retain deeper water fish habitat throughout the summer? While standing at the end of Energy Dam, I had my answer: They retain water in the arms. Energy Lake is on the left of the dam, while Crooked Creek Bay of Lake Barkley is on the right.
Posted by SkyHiker at 5:57 PM