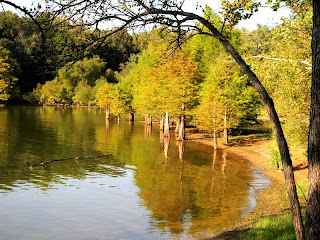 Hiked Friday, September 23. Having walked the last southern segment of the North-South Trail on Tuesday, I was back north of KY80/US68 today. Unfortunately, I only walked a very short segment of the trail today.

Starting from KY80/US68, I exited on the Trace and headed north. I passed the Elk and Bison Prairie (on the right) and the Jenny Ridge Picnic area (on the left). Passed another road on the left, then approached the sign for Jenny Ridge Cemetery. While the road for the cemetery requires a right turn, just before (as in literally dozens of feet before) reaching it that road, there's another road that heads to the left. That is LBL Road #141. It's a gravel road that is generally fine for passenger car travel.

Stay on #141 as Road #143 splits off to the left. Stay on #141 (turning somewhat to the left) as Road 336 peels off to the right. This section of road is almost entirely single-lane, so if you run into on-coming traffic, someone's going to need to back up. Fortunately, I hit no traffic either coming or going. 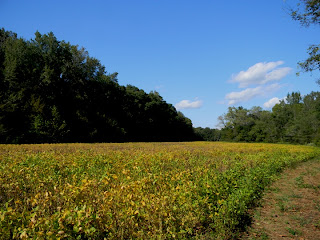 About 1 mile after the 141-336 split, the road crossed a small trickle of water, which I am pretty sure must be Dead Beaver Spring (one of the water points for North-South trail through hikers). There was no sign there, but almost immediately after crossing this water, I noticed yellow blazes on trees along the road. Yellow blazes are what they put on spurs that connect to the North-South trail. That means this part of the trail is open to car travel.

At the first opportunity, I parked on the side of the road. If I had known better, I probably would have continued another 1/2 mile or so, to a much wider junction point where several cars could park without blocking any possible farm traffic. I mention farm traffic because the fields here were planted in soy beans. It's also where I ended my first day of hiking on the North-South trail, way back on August 30. This was adjacent to Vickers Bay. Even from near my car, on my return trip, I could hear the roar of boat motors from the nearby bay. 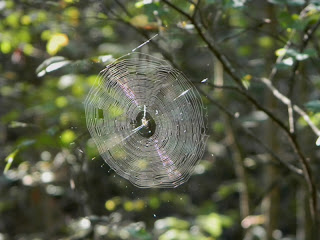 Once on the North-South trail, I walked a mere 1.5 miles north before turning around. Several factors for the early turnaround, including a late start and dead camera batteries. This was less than half as far as I intended to hike today, and I'm kind of bummed about that.

On the plus side, there were several first-time and interesting sights. 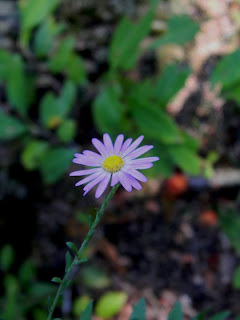 When I got to my turn around point (unlabeled on the maps I have, but probably Savells Bay (because there's a branch of a stream and a cemetery near this bay called "Savells," and because all of the other bays along these lakes seem to be named after the stream and/or cemetery that is adjacent to them).

I stopped at a convenient overlook and enjoyed the view. I took lots of pictures (one of which is at the top of this post) and watched for fish and birds that might be in the area. Don't remember seeing much in the way of birds (besides crows) there, but I did see several large splashes in the bay. Undoubtedly here, as on other places along this lake, there were some BIG fish.

As I looked across the bay, I saw a small object moving across the surface. I was pretty sure this was a snake, so I zoomed my camera in and took numerous pictures. It's funny, because when you blow those pictures up, they look an awful lot like pictures you see of the Loch Ness monster.

The monster (only its head stuck out of the water, but in the pictures, I could see the undulating body) slowly made its way across the bay. I was wondering what it would do when it reached the other side. Would it come out of the water?

No, instead, it started making its way parallel to the shoreline, heading towards me. So I tried to stay reasonably quiet and clicked off several pictures. It kept coming closer, and I kept shooting. Until my battery died.

My camera takes 4 AA batteries, and it eats through them pretty fast. I'd guess after about 120 or 140 shots, it starts getting iffy. Usually, after it "dies," you can turn off the camera, then turn it on again and get a few more shots off. But each time it goes on then off, it makes a pretty audible beeping noise. In this case, the beeping went off as the snake made its closest approach. It then froze. Rather than having its body on the surface, it submerged itself. The head still stuck out of the water, so if there was no water there, it would, perhaps, looked a little bit like cobras do when they're being charmed (at least the ones in movies and on tv). I tried to get my camera on again for a few more shots, but this next set of beeping sent it under water and very quickly off. I learned that snakes can move underwater a lot faster than they move along the surface. Not sure how long they can stay under water, but I did not see the snake again.

While cursing my failure to bring a spare set of batteries, I kept watching the water, looking for the snake or other interesting things. I saw a large object moving under the water. It definitely wasn't a snake. While the snake was probably 2 or 2 1/2 feet in length, it was no more than two inches in diameter. This other thing, I thought perhaps to be a large bass. It moved slowly and turned slowly. 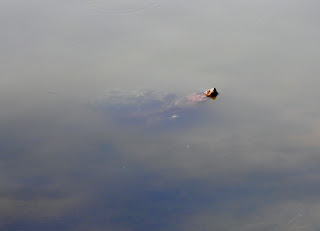 But then it surfaced. Definitely a turtle, though bigger than any freshwater turtle I had ever seen before. I figure its shell was 18-20 inches in length.

Hard to be sure about the length of both the snake and the turtle, however. On open water, there's no frame of reference to judge their size against.

Got two shots of the turtle before my battery died again and the camera beeped. And, as with the snake, the beeping sent the turtle under water and away. The dead battery was my cue to head back. I managed to get a few more shots off along the way, but most efforts were interrupted by the beeping of dead batteries, again. One decent shot of an aster made it, and one of some leaves. 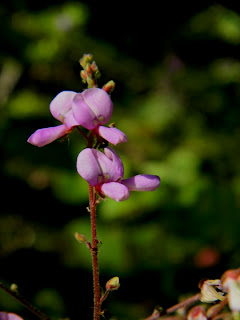 Just under an hour to get back from the lake to the junction with the spur trail I took. From there, it was another ten minutes to my car. One hour at a moderate pace, with very few stops for pictures on the return trip, means about two miles of walking, one way.

One odd thing I didn't photograph were a couple of bugs, grappling. One looked like a very large bee, stinging a large, winged creature (different species). Not sure what the plan was. I always thought bees were nectar eaters, but this one was trying to kill another insect. Guess some of them are carnivores. 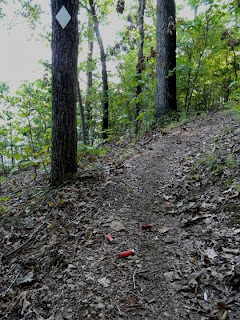 I also saw several spent shotgun shells. I assume this means it's squirrel hunting season. Not sure when the season is and if it's limited to certain times of the day. I didn't hear any shots while hiking.

Not too worried about squirrel hunting, because I figure they're shooting up and they're using shotguns. Short-range, and not likely to get hit with shot. Deer hunting season, however, I'm going to have to stay in areas where hunting is not allowed. Gotta figure out when that is.
Posted by SkyHiker at 8:35 PM