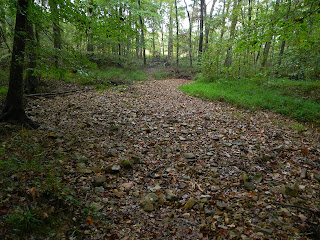 Hiked Monday, September 20. Despite the weather forecast of "mostly sunny" for the afternoon, it started drizzling on me almost as soon as I left town. On the drive down, I got some periods of pretty heavy rain, and other periods of drizzle. 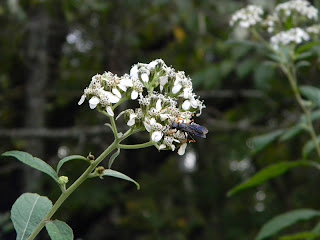 With the rain continuing after I got to the trailhead, I killed some time in the South Welcome Center, hoping the rain would stop. Would up buying a couple of books as well as a bit of country style bacon. Yeah, I wouldn't have expected bacon at a national recreation area bookstore, either. ;D 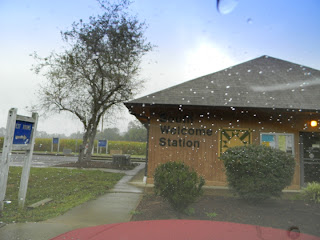 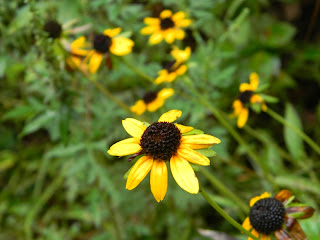 Still, the rain continued, so I gave up on the planned hike and started driving up to the Golden Pond Visitor Center, with the intent of watching a planetarium show, then checking the weather after the show. However, just two miles or so north of the entrance station, the rain stopped. So I turned around and returned to the South Welcome Center area. The rain hadn't stopped there, but I figure (hoped) that it would stop soon. 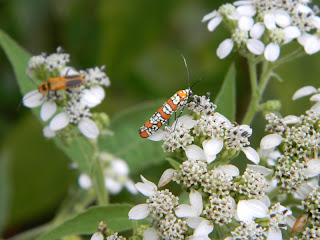 The south terminus for the North-South trail is kitty-corner, to the South Welcome center, on the opposite (west) side of "The Trace." There's a fair-sized parking area there, with room for about a dozen cars, but the lot was empty when I pulled in, as the rain continued. From this lot, you can either head to the northwest (forward and to the right, if facing away from the Trace) to get on the North-South Trail, or to the south (left, if facing the parking lot from the Trace), to get on the Bear Creek Loop. I went to the right. 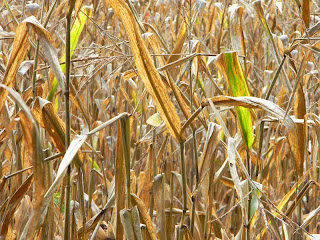 The North-South trail climbs consistently but not too steeply as it slowly rises above and parallel to the Trace. As I climbed, the rain continued, though not too heavily. I was also mostly beneath the tree canopy, so I really only got wet when the wind blew the leaves above and knocked the water loose. 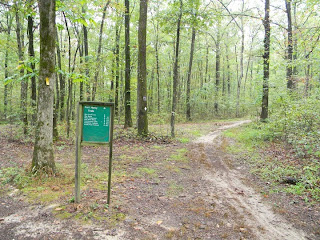 After a quick half-hour (I was walking quickly, in part, to stay warm, and in part to get out from under the rain), the rain stopped, and I reached a green trail junction sign. Turning left here would send you south, on the Bear Creek Loop, and would eventually take you back to the opposite end of the parking lot that you just left. Looking on the other side of the sign, I saw I had traveled two miles from the trailhead. 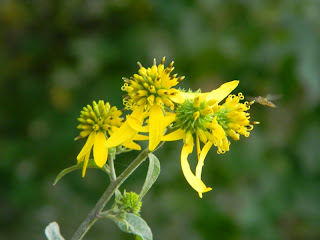 Meanwhile, forward and to the right was the continua-tion of the North-South trail. I took a few pictures (pretty much the first of the hike, since I had kept the camera in its bag and in my backpack earlier, to keep it dry from the rain), then continued on my way. 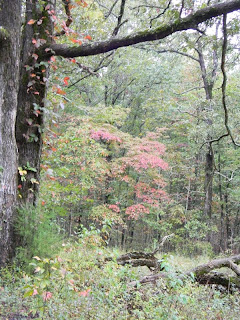 In another 30-40 minutes, I was at my destination. I reached the trail marker sign where I had piled some rocks to mark the southernmost point of my previous day's hike on the North-South trail. Based on my hiking time, this was just 3.5 miles or so from the south trailhead, meaning my estimate for the previous day's hike was probably low. I had actually gone between 15 and 15 1/2 miles round trip the last time on the trail. 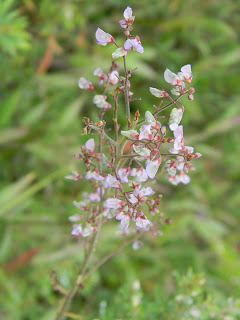 I took some more pictures, and turned around. Again, it was just about 30 minutes back to the sign. Since there was plenty of time before dark, the rain was still stopped, and I wasn't tired, I decided to extend my hike by taking the Bear Creek Loop. This route sent me south about a mile and a half, before the Bear Creek Loop arced back to the east, then to the northeast. Between 9.8 and 10.2 miles total for the day. 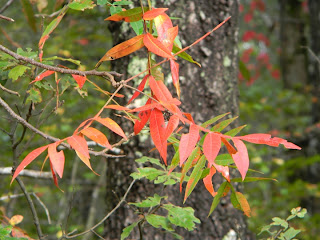 During most of the hike, the skies were overcast and the ground was wet. For about 20 minutes, however, I got a little sunshine, which came in at a low angle and lit up a section of trees I was walking through. That's the one advantage of broken weather--you get nice lighting effects and some drama in your views. 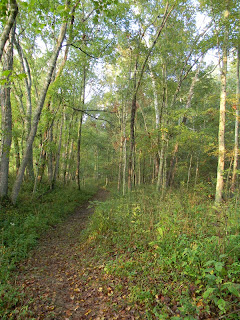 This trail had a wide variety of views. Along the way, I crossed the Fort Henry Road, crossed several large fields, then spent the last 3.4 miles on the Telegraph trail. Along the way, I also walked adjacent to several large corn fields. There's also an extended segment along and through the bed of Bear Creek (which was almost entirely dry at this time in the season), then a bit along a ridge that (if the tree cover were not so thick) would present a pretty impressive overview of the area around the southern end of the park. 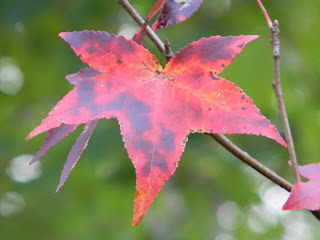 I saw many different flower species that I had not seen before, and have included pictures of them in this post. I also saw a couple of interesting insects, which are also pictured, usually on flowers. Spooked several deer, including one that stared right at me for several minutes before high-tailing it across a field. So in addition to the realtively clear picture of him staring at me, I took (but did not post here) some really blurring pictures of a deer bounding away. 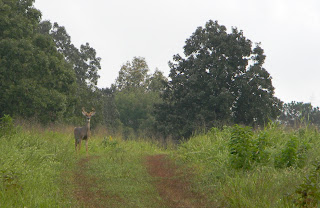 I also spooked at least one very large bird, probably a turkey vulture, possibly an eagle. The wingspan was definitely over six feet. Saw a hawk or two, plus many smaller birds and a small number of squirrels. 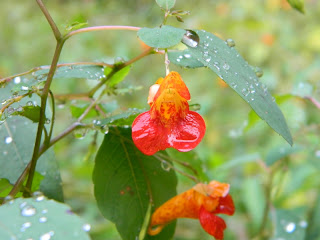 One of the books I bought (and a free hand out I got) are of wildflowers of LBL, so I'll spend some time going through my pictures and identifying some of my catches of the day. Many of those pictures are also just tacked on to the end of this post. One plant I did succeed in identifying is called a "Touch Me Not." It's posted at the start of this paragraph. 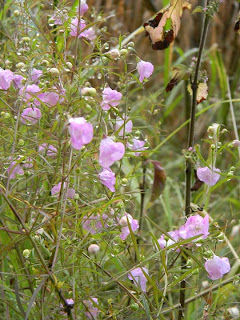 Interesting flower. It's almost like it's a pitcher, hanging as from a thin thread below a step. 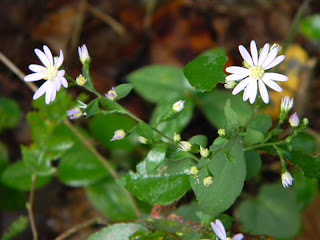 I've also hiked the majority of the Fort Henry trails system, with the exception of certain segments that were also closed. Most of the Canal Loop trails have also been covered. Mainly, in terms of new trail mileage, I've got maybe one more hike in the Canal Loop I could do, and maybe one more around Fort Henry (depending on exactly which trails turn out to be closed). Then, it'll just be the north section of the North-South trail left. 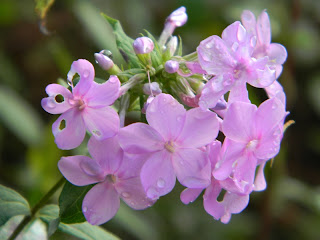 Of course, I can always retrace some steps, as I have already done with the Honker Trail and will do several more times there and on the Hematite Lake trail. I want to watch the leaves change. There are also other trails for which I don't have handouts, and other dirt roads that could be walked. 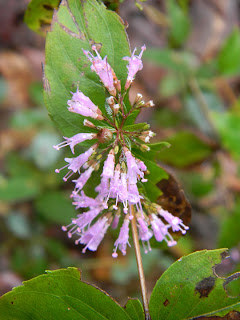 In short, there's still plenty of hiking available to me. I figure the north segment will require at least as many hikes as the southern segment did. Between that, the other trails I've come across, the the desire to repeat some trails, this will definitely be enough to keep me busy through November. And once the leaves fall, many of these trails will probably look quite different.

Only thing I need to make sure of is when hunting season opens, to make sure I'm not on any trails where that would be an issue. I love hiking, but I would hate to get shot!
Posted by SkyHiker at 12:22 PM