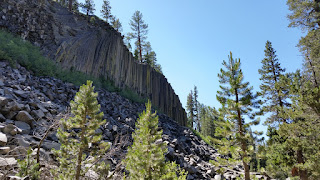 Hiked Sunday, July 3. 1.2 miles. During most of the season, for most of the day, access over Minaret Pass, to Agnew Meadows, Devil's Postpile, and Rainbow Falls (etc) is by shuttle bus, only. The shuttle bus leaves from the Mammoth ski resort. Tickets were about $7, roundtrip, which permits on-off riding down in the area between Agnew Meadows and Red's Meadow Resort.

Depending on how early you get there, and/or if you're willing to pay a rather steep parking fee, you can either park right near the shuttle boarding area or park a mile or more down the hill. I don't recall if they had shuttle buses to take you from the ticket/boarding area down to the more remote lots on the Mammoth side of things. 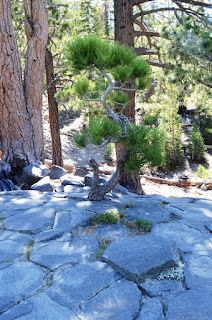 Stop 6 puts you close to the actual Postpile. Stop 8 may be marginally closer, but not a big difference. Stop 6 is also near the ranger station, so most people get off, there. From there, you head downstream, with the San Joaquin River on your right. Only about 1/3 mile to the base of the Postpile, which are, you probably already know, columns of basalt.

From the bottom, it's a short, steep 1/8 mile or so to the top of the Postpile. Polished by glaciers, it looks a bit like tile. A small but oldish pine tree grows from out of it's surface. I photographed that same pine tree the last time I was here, about 20 years ago. 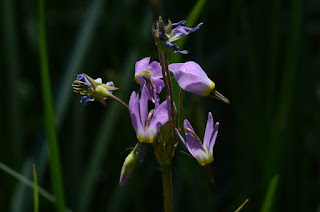 From the top, maps indicate it should be only another 1/8 of a mile or so to rejoin the trail that went below the Postpile, but it seemed much further than that. There are several nice extrusions of basalt, coming out at different angles, as you make your way around.

Once rejoined with the trail, it again seemed longer than it should to get to the trail split. 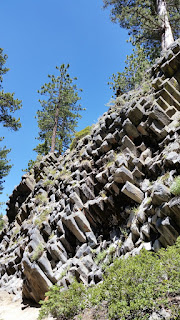 At the split 1.5 miles straight would take you to Rainbow Falls. But my wife was not having fun, so we turned left, to get to Stop 8. Once you reach the road, again, stop 8 is to your left. Unauthorized vandalism was the only way to know that [or, you know, looking at a map. ;D ]

We rode to Stop 10, where my wife could sit and relax, and I could use the restroom, then drop back down towards the trail to Rainbow Falls. But that's the subject of my next blog. ;D 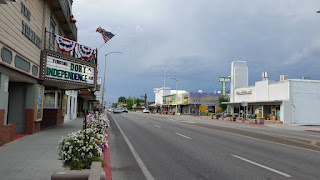 The rest of these shots were actually from the night before. Stayed in Bishop on for a couple of nights. Super 8. Walked basically the length of Bishop after dinner, from my motel room to the Von's and back. 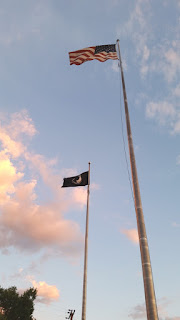 Passed the theater, which was showing (obviously) Independence Day II and Finding Dory. I just got a kick out of the Fourth of July bunting to match that marquee display.

Also passed their POW/Veterans Memorial, which are some flags and rocky plaques, near Von's.

Of course, by the time I got back to the motel room, it was getting dark. Still, I enjoyed the glow of those clouds I saw on the way back. 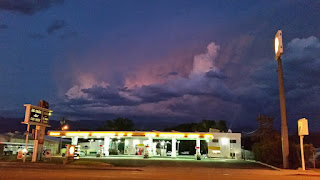 Here are those clouds, above the Shell Station that was across the street from my motel stay. There was a Jack in the Box immediately south of the motel. Nice for quicky bites, if you needed them.
Posted by SkyHiker at 9:44 PM