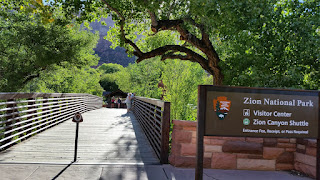 Hiked Saturday, September 10. 5 miles. The previous day, I hiked the trail to Northgate Peaks, then I spent the night in St. George. On this morning, I aimed to get to the main canyon by 9am, figuring that would be early enough to be able to park at the visitor center. However, I was apparently already too late. 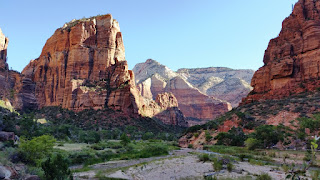 As I approached the entrance, the cars were lined up, and appeared not to be moving. So I pulled a U-turn, and parked on the west side of UT-9. I figured, this way, if there was still a line of cars entering when I left, at least I would not be trapped by the cars. 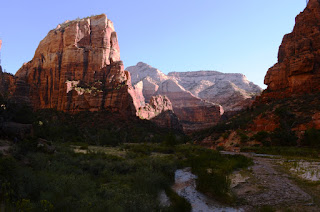 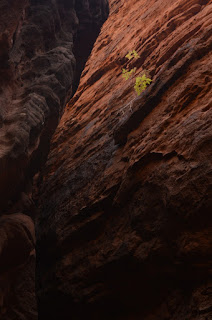 From the visitor center, it's just four stops or so to The Grotto stop, which is the closest one to Angels Landing.

I had some trepidation about this hike. Not for the hike, itself, but because I know it's one of the more popular hikes in the park. Since there are many spots along this trail where it's not wide enough for two hikers to safely pass each other, there can be bottlenecks. 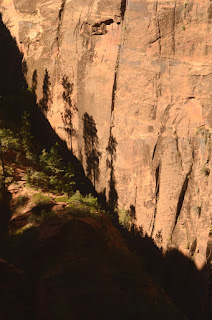 On that matter, I was correct. It was a very crowded trail. But I wanted to hike it.

In fact, I had hiked it, before. That was some twenty years ago. Since then, I had seen this hike on many hiking shows. And the funny thing was, it looked much scarier on tv than it seemed in real life when I hiked it. So what gives?

Well, the narrowness and large drop-offs are real. No way around that. But the chain running along places with large drop-offs meant you weren't nearly as exposed as you would be without the safety chain. 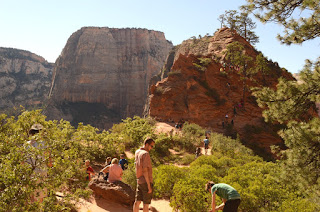 In fact, with the chain there, I noticed that I concentrated on the chain and on where my feet were going. I paid relatively little attention to the potential for falling 1500 feet to my death. And that's as it should be. Technically (and, especially, with the chain), this hike isn't any more difficult than many other hikes I've done, before. Yes, it's "Class 3." At least for me, there are places where my feet were both off the earth at the same time. Indeed, that night, my arms were pretty tired. But it was a good tired. 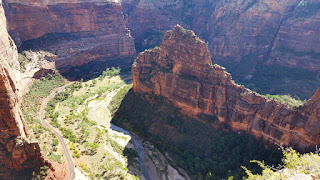 Because of the need for free hands, I took most of my DSLR shots when I was stopped. In some places (like at the start of this hike, for the second and third shots, above), I took shots both with my dslr and my Samsung S5 phone. Kind of fun to have the contrast. My phone gives a view pretty similar to my zoom at 18mm on my dslr. 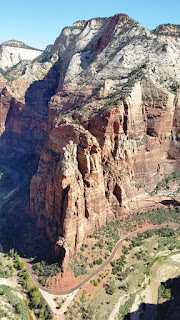 I suppose the upshot of this is that I wasn't all that tired when I finished this hike,which is why I went ahead and tacked the Pa'Rus hike on to the end of my day (which ended by 1pm, as I was driving down to Las Vegas that afternoon). 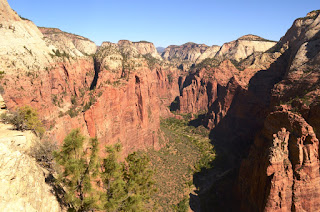 The view from atop Angels Landing is indisputably outstanding. Of course, the view from pretty much anywhere in Zion Canyon is pretty amazing, so that's a given. Unfortunately, photos don't often do this justice. You don't get a real sense of the scale, unless you're able to focus on the road on the valley floor and realize that the little ribbon you see down there is 30 or 40 feet wide or more. 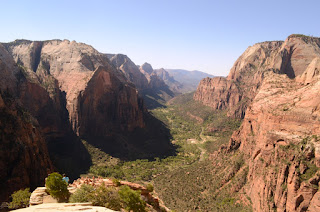 Also, because it's a north-south trending canyon, there will be harsh shadows on one or both side of the canyon when ever the sun is up. Still, getting good pictures isn't necessarily the point of the hike, is it?

At any rate, it was nice to return to this hike. I hope to do both a few oldies and a few new ones in the next few months. My hiking plans haven't always gone as intended, however, so no promises, I'm afraid.
Posted by SkyHiker at 9:35 PM