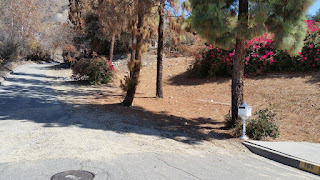 Hiked Sunday, July 24. 3 miles. This was a day I wanted a short hike and had no real idea as to where I might go. The fire in Santa Clarita was still going strong, so I was not likely to want to exert myself too much.

Wound up here, near the corner of Melcanyon Road and Brookridge Road, in Duarte. It's the next canyon west from Fish Canyon. 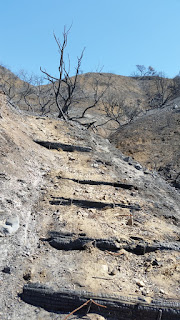 I have hiked here many times before. In fact, I hiked from here during my first 100 hike year, but it had been a while since my last visit.

(For some reason, some of the shots I posted on that hike aren't displaying on my computer. I will have to see about fixing that, later.)

The big change since my previous visits was that this entire area had burned, just about a month before my visit. That was the "Fish Fire." It burned right down to the neighborhoods of Duarte. In some cases, even the trees right across the driveway from a home had burned, but the homes appeared undamaged. 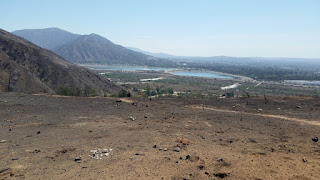 I hadn't realized how far down the fire had come. I also wasn't sure if a closure order was in effect, as is often the case after a fire. But no signs were posted, so I started up the hill. The smell of ash was strong. And much of the soil looked sterilized. It was ash or dirt. 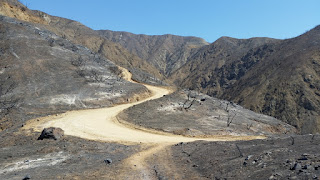 The bleak nature of the land around me gave me some pause. But I pushed on to the first flat area, where this steep trail met up with the large dirt road, which I believe is, "Van Tassel Motorway." Follow this road long enough, and it links up with the road that heads up and east from Monrovia Canyon, near White Saddle. A write-up of that hike is here. A picture of White Saddle was here. 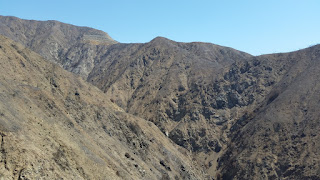 Looking over some of those hikes makes me long for those days of multi-hike weeks, and covering all that new ground. It's a shame I don't have that kind of time, any more. 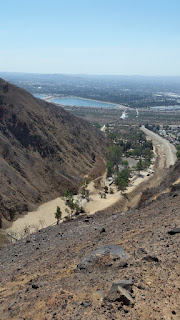 During this short hike, I noticed some riders going between the horse stables down on Encanto Parkway and further up Van Tassel Motorway. I asked one of the riders if he was aware of any closure order in this area, and he said he was not. So I'm assuming there is no closure order, though I can imagine bulldozers, working to keep the access to the power lines of the Tehatchapi Renewable Project maintained. Clearly, the road had been bulldozed, since the fire. It was the only thing white in a sea of grey. 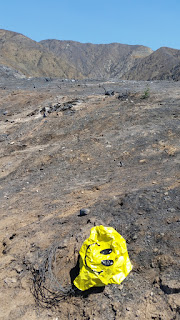 After having gone far enought that I was sure I would have my three mile minimum surpassed, I returned to my car. Too dusty to really want to walk around here for too long, anyway.

Still very far behind in my hike blogging, but at least I managed to catch up some on my links, recently. Should be having some new hikes to thing about this weekend, too.
Posted by SkyHiker at 11:09 PM