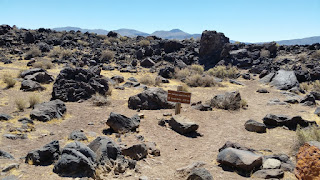 Hiked Monday, July 4. 1/2 mile I just wrote that I was caught up on the last few weeks of hiking, but I checked, and saw I was not. Still much blogging to catch up on the hikes for this year, never mind for last year! 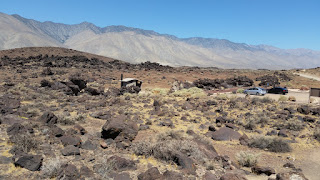 Obviously, this one was hiked back in July, as I drove back from a short excursion to Devil's Postpile and Rainbow Falls, near Mammoth, CA. Apparently, I hadn't blogged those yet, either. How is this possible? I really have been having trouble keeping up with my blog!

The BLM entry for Fossil Falls is here,if you have any questions about location or scientific and cultural significance. 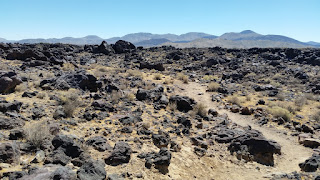 Fossil Falls is one of those places you probably wouldn't make as a destination (although, I suppose, if you were looking for someplace with a dark sky, for astronomical viewing, this might work!). However, since it's right off of U.S. 395, it's one of several places you might choose to use to break up the long drive between Los Angeles and the Mammoth-Bishop Area. 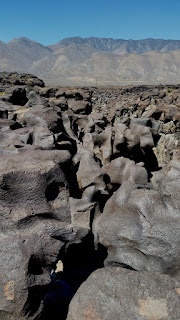 Short drive on a dirt road to get here. I'll guess about 1/2 mile, though I don't recall, any more. I just know it was not immediate, so probably between 1/2 and 3/4 of a mile. The parking area is large enough for a dozen or so cars at a time. There's an informational board and vault toilets here, but no running water.

The trail heads east, then south from the parking area. It's mostly well-defined, except for when it crosses over lava rocks (of which, yeah, there's a lot of that). There's no real "end" to this, either. The trail leads to what you can think of as the "head" of the "falls." 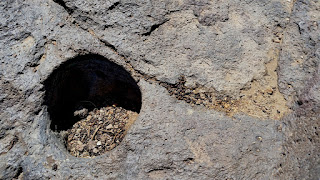 Before the LA aqueduct (and definitely before the end of the last ice age), water flowed south from Owns Lake, polishing this lava outcropping. In some areas, rocks swirled in pits in the lava, carving smooth, almost circular pits. The smoothness is really quite impressive. 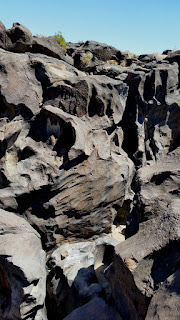 In other places, the polish creates sharp edges. Sturdy footwear here is a good idea.

I'd probably driven by this place a dozen times or more (I mean, as the driver) without curiosity getting the better of me. But, last year, I met up with some friends in the White Mountains during the Perseid meteor shower (hiked the Ancient Bristlecone Forest that year). They stopped on the way back to LA, and shared some pictures. 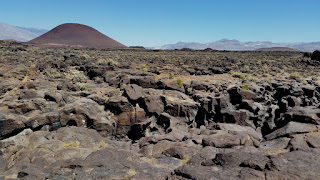 That might have been enough to get me to stop here, all by itself. However, it also turns out that the rest area at Coso Junction (just north of here) was closed, so I figured this pit stop could pull double duty. (at the time, it had been closed "indefinitely," since early June -- I just checked, however, and it opened last week. How's that for timing?). 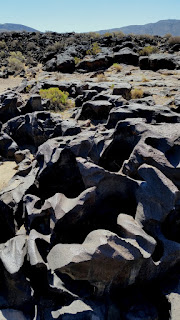 In addition to the lava flow, there's also a large cinder cone, just north of here. Mining is going on in the area, as well. Doesn't detract from this being someplace very worth of a stopover, at least once, as you drive U.S. 395.

So, I still need to blog my last two hikes, as well as some from back in July!
Posted by SkyHiker at 11:28 PM