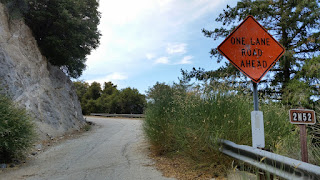 Hiked Friday, July 22. 5 miles. Looks like I goofed and put two posts up on the 19th. I had intended to post one, then schedule the other one to post in a few days, to spread out the new material. Oh, well. 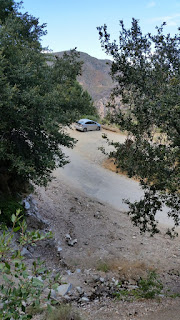 Here's another one from way back in the summer. This was the first day of the fire near Santa Clarita. I heard of it on the radio and on-line earlier that day, but didn't think too much about it and how it might affect my hiking plans. Since I got off at 4pm this day and did not have to work my night job, I was figuring on a nice little afternoon hike. Little did I expect how impactful that fire would prove to be.

This trailhead is off of Mount Wilson Road, just a 1/2 mile or so south of Red Box Junction. You make a sharp right turn off the road, and head up a bit to a parking area, outside a locked gate. 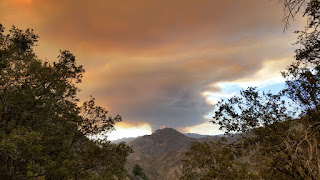 There's an actual trail that starts just south of that gate, but, today, for variety's sake, I headed up the road, instead of the trail. Wound up taking the trail back, however, to make sure to beat the dark. 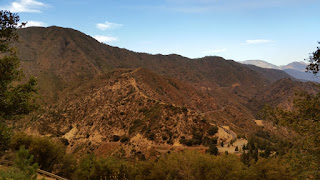 Obviously, the altitude gain is the same either way, but I'm sure the road must be longer. Not normally as foresty, either, since you're walking on a wide, dirt road. But, again, variety. 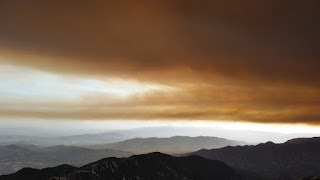 Even before I made it to the trailhead, I could see smoke from the Santa Clarita fires, floating over us. As the crow flies, I figured there was no risk of the fire actually getting near us tonight. Hadn't thought the smoke would be so thick. 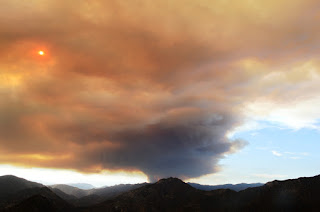 The wind also shifted over the course of the hike, moving the smoke lower, on to near the summit of Mount Disappointment (and an unknown peak I summitted, just to its west-southwest. 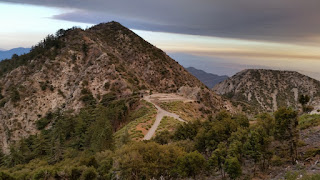 It was quite a change. At the start, looking to the east and northeast, the air was crystal clear. But, by the end of my hike, the ash was falling, and the air was definitely not healthy to breath. 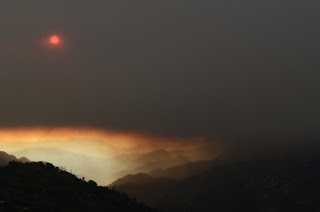 Made for some otherwordly views. I shot dozens of shots of the sun, disappearing behind the smoke. Weird coloring, of course. 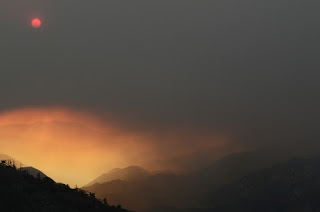 It's been a tough summer, with lots of fires, and lots of hiking days affected by smoke. On some days, I had to call off my planned hike. Still, the main things affecting my hike (and blogging) productivity are not weather-related. Not sure how frequently or for how long I'll be able to hit the trail. Still have lots of older hikes to blog, though. That'll keep me busy for a while.
Posted by SkyHiker at 8:41 PM